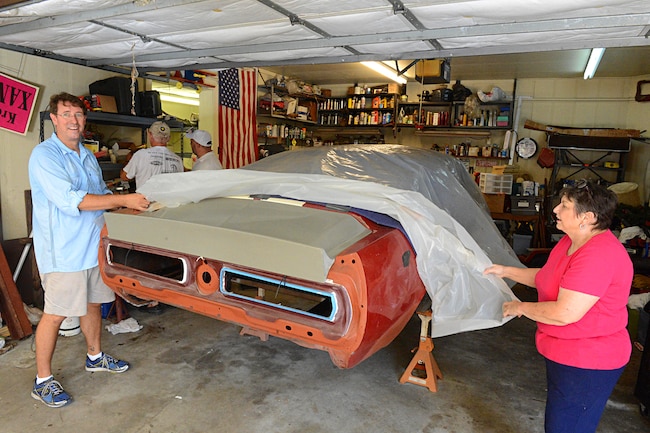 Ten years passed before Shane Fowler got the chance to see this 1967 G.T 350, let alone make a purchase, but now that time had come. He had only heard of the car. Fowler, an endodontist, Mustang collector, and amateur restorer became well acquainted with the owner, LTC Alvin Smith, U.S. Army retired and former helicopter pilot in Vietnam, saying, “He told me he was a night stalker, which I think it was special ops (Special Operations Aviation Regiment). He would come here to the garage. He always said he didn’t want us to see his Shelby until it was finished.”

Fowler’s hobby garage is a Mustang focal point in and around the small community of Lafayette, Louisiana. Clubs and enthusiasts gather here for car shows and just to hang out, and he hosts the regional group of SAAC (Shelby American Automobile Club) every year in May.

Fowler invited us to go along and take pictures and video for the unearthing of the G.T. 350. Smith had taken the classic Shelby completely apart, and then in May of 2016 fell seriously ill before he could finish his dream build of his G.T 350. His wife of more than 50 years, Rosemary, was up against what she called “the hardest decision I’ve ever made in my life. Al’s in a nursing home. He’s bedridden. I had known that eventually I would have to do something about the cars. They can’t sit there forever. It’s a waste. It’s just wrong,” she told us through tear-filled eyes.

The reality of the situation came to a head in May of 2018 when Shane called Rosemary about the SAAC regional show, hoping Al could attend and offering to put him in a wheelchair to make it easier. However, due to his condition, a visit was out of the question. Instead, Rosemary invited Shane and his father, Ken, who had become good friends with Al, to come and look at the G.T. 350.

Shane and Rosemary pulled the cover off the ’67 G.T. 350, stored here for at least 15 years.
That first day, in 1979, the car had its picture taken with an old Polaroid film camera. The original Lime Gold had already been repainted red.

“I talked with Ken several times, and he told me when I got ready to sell the cars [including a 1978 Mustang II] to give him a call and he and Shane would come and talk with me about how to go about selling,” Rosemary said. She knew the ’67 G.T. 350 was a special car and one that she did not want to just throw on eBay.

Fowler looked over the Shelby. He could see it was a good car and he wanted to be the buyer. So, he and Rosemary made an agreement, which included the Mustang II. Buying a car in pieces is a job for an experienced collector, and Shane knows his Mustangs and Shelbys. He’s been a Mustang enthusiast since he was 12 when his father brought home an old 1970 Mustang convertible they restored for his high school days.

“It’s the reason I’m alive,” Shane said, referring to the ’70s stock 250 six-cylinder. “If it had been a V-8, I probably would have died because I drove it hard, even then.” He still has the convertible, parked on jackstands in his hobby building. As we waited in that shop his father, Ken, showed up, followed by Mike Hill, Ken’s neighbor who is a retired sea captain and helps out when needed. “Every box we open is going to be a new prize,” Hill said. He had been along for the initial viewing with Shane and Ken.

Shane pulled an enclosed trailer with his Ford F-250 pickup to Rosemary’s house, which was just a few miles away. Upon our arrival, she was standing in her driveway to greet us, and then drifted back to 1979 when they got the Shelby. “He and his best friend, Jon Gregory, who lives in Aberdeen, Maryland, love Shelbys. And Jon bought himself one. And, of course, Al wanted one, too.”

Ken Fowler found the original rear axle on the garage floor.
The original 289 Hi-Po engine was in the corner of the room adjacent to the garage.

Al was not having any luck finding a car. He didn’t know Rosemary and Jon were about to surprise him. “One day in 1979 the doorbell rang and there stood Gregory, saying, ‘Smyth my boy, here’s your keys,’ and Al said, ‘huh?’ It was three o’clock in the morning,” Rosemary recalled for us. Gregory had flown to Kentucky and drove the Shelby home. The G.T. 350 cost $4,000. “Of course, we paid him for it,” Rosemary said.

As we talked, Shane, Ken, Mike, and four more friends just arrived—Dennis Norman, Conrad Fry, his son Conrad IV, and his son’s girlfriend, Elizabeth Comeaux—and moved parts and debris from around the Shelby, which was completely covered. “He took it apart between 2003 and 2005, so it’s been sitting here for at least that long. You know how it is when they sit long enough. They become a table or a shelf,” Shane said.

We walked around the car and into the adjacent room where the 289 Hi-Po was on an engine stand along with a ton of parts on shelves, including front and rear seats. Ken pointed to the rear axle on the floor. Dennis pulled off the mechanism for the fold-down rear seat off the garage wall; on another wall hung the Shelby’s decklid. Conrad carried it to the trailer.

When Ken yelled, “Shane!” we knew he had found something big. “Is this the original transmission?” Ken asked. Shane moved away debris to get a closer look. He rubbed the pad on the side of the housing to discover the last six digits were a match to the Ford VIN. Yes, this was the original four-speed. A key missing part is the aluminum and wood steering wheel. Rosemary fears this piece might have been stolen.

As they rolled back the covers on the ’67 Shelby body, Rosemary said this was the first time she had seen the Shelby in five years. She pointed out traces of the original Lime Gold paint on the body. Shane and his friends jacked up the body and attached Shane’s homemade body dolly on casters for easy transport to the enclosed trailer. With the body out of the main garage, we could remove the parts from the adjacent room, which included the original 289 High Performance engine on a stand.

The day was bittersweet for both Shane and Rosemary. She realized it was time to sell, which was sad, but the right decision. Shane agreed, but said, “It wasn’t how I wanted the car. I’d rather him be 90-something and not driving anymore, and then sell it. But, we’ll fix up the car and have it back soon.” Rosemary is excited at the prospect of the car being restored, which is the operative word here. “It’s going to be put back to the original specs, and I think that’s terrific ’cause I’m a purist at heart myself. I’m glad to see it go back to the original color and all that.” Of course, Shane will take her for a ride in the car when he finishes the restoration in a year or so.

Rosemary Smith said Al used the ’67 Shelby as a daily driver for work for years. He worked at the Aviation Test Board at Fort Rucker, Alabama. He was a captain in the Army. “He and Jon would drive their 1967 Shelby G.T. 350s up to the parking lot and drive them side by side. We used to make jokes about breeding them and making baby Ponies.”
Rosemary ran across this presentation from April 15, 2012, that Dan Baker gave to Al Smith, a helicopter pilot, for saving his life “more than once” in Vietnam. 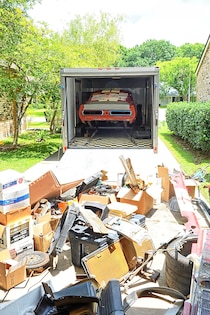