Wyld Stallyns! The little-known appearance package for the Mustang II for 1976—the Stallion 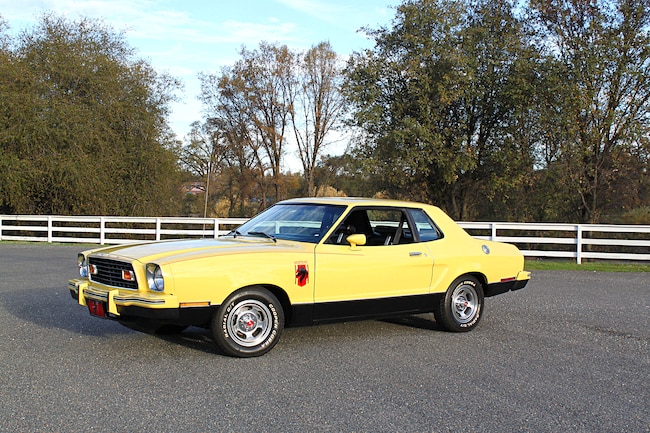 During its five-year run, the Ford Mustang II saw very few changes. Probably the biggest change during that period was the introduction of the 302ci V-8, returning to the Mustang lineup in 1975 after a one-year absence. But each year Ford did try to spice things up for the lineup. For the 1976 model year, Ford added two new youthful appearance packages. First was the well-known Cobra II, a realistic attempt—in appearance at least—to recapture the Shelby G.T. 350 excitement of the decade before. Available only in hatchback form, this striped, scooped, and spoilered creation went on to become a sales success with Ford selling five times as many Cobra IIs than they intended to with 25,259 rolling off the assembly line that year. Though the Cobra II did not live up to its name performance-wise, the name helped to improve the Mustang’s image and increase sales. And having the beautiful Farrah Fawcett driving one on the hit TV show Charlie’s Angels sure didn’t hurt either.

Most Stallions were 2+2 three-door hatchbacks, but according to Kevin Marti, 1,942 two-door hardtops came with this one-year-only package. Bobby Aldrich of Placerville, California, has this Bright Yellow example of a two-door hardtop.

Bobby purchased the Stallion back in 1996 after finding it listed in the local paper. The current owner was a contractor and was using the Mustang like a work truck. He had also hit a tree at one point requiring the driver-side door to be replaced. Even though it needed a full restoration, Bobby handed over the meager sum of $250 needed to take this Pony home. It started right up and he was able to drive it home.

At some point the original 2.3L four-cylinder was replaced with another one, but all Bobby had to do to it was replace some seals, complete a tune-up, and install an N.O.S. carburetor to get it running perfectly. In fact, over 20 years later it is still running like a charm. The 88hp engine is backed up by a four-speed transmission. Bobby did swap out the original 6 3/4-inch integral carrier axle for an 8-inch removable carrier axle.

Bobby had Waldrens Auto Body in Shingle Springs swap out the door and replace a quarter-panel before spraying the color code 6E Bright Yellow paint to the stripped-down shell. Then the necessary black-out treatment was handled as well. When Bobby worked at a local Ford dealer, he was able to obtain a set of N.O.S. Stallion fender decals from one of the Ford Auto Transport drivers. “He noticed my other Mustang II in the parking lot,” Bobby said. “He said he had these decals and wondered if I would want them. They were the Stallion decals.”

When Bobby purchased the car, it had two Styled Steel wheels and two aluminum wheels. Since the restoration was done prior to the Marti Reports becoming available, Bobby did not know which wheels were correct. He went with the fancier aluminum wheels and has stayed with them, even though now he knows it came with the Styled Steel wheels when it galloped off the showroom floor. They are wrapped in P195/70R13 Cooper Cobra radial tires. Bobby also went ahead and added the dual racing mirrors as well.

With reproduction seat upholstery from Mustangs Unlimited, Bobby brought the inside back to new with N.O.S. door panels, console tray, and dashpad. He also went ahead and added a Ford AM/FM radio and digital clock.

When the car was first completed in the late 1990s, Bobby modified the Stallion a bit with a Cobra II front spoiler, tinted windows, front light covers, and a Ford Motorsport valve cover. He also painted the engine red; he did it to jazz up the car a bit, and the red in the engine matched the red in the Stallion decals, pinstripes, and wheel center caps. He later corrected all those items once he realized how rare and unique the Stallion hardtop was. Today the Stallion is relegated to weekend drives and an occasional car show, where it attracts a lot of attention and awards—as it should! It’s one stellar stallion.