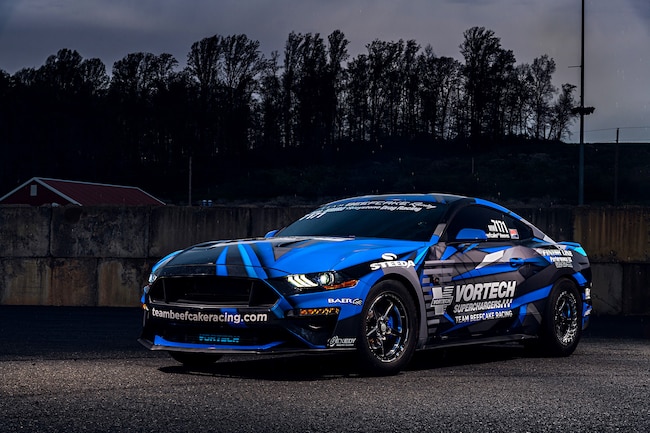 As some enthusiasts resist change, others run right at it head-on. A brave new generation of enthusiasts was ushered in 32 years ago with the introduction of EFI to the Mustang platform. The next major engine change was in 1996 and plenty of eager and willing shops, tuners, and builders who took on the OHC challenge. The 2018 Mustang 5.0 features an engine platform that has changed the game—again—with the addition of direct injection as part of the fuel delivery.

For the first time a set of high-pressure injectors deliver fuel directly into the combustion chamber of Ford’s V-8 engine, offering some challenges to the high-power aftermarket. One of the first shops to start messing with the direct injection technology has been Team Beefcake Racing. Its owner Terry “Beefcake” Reeves jumped right into it and his new ride cranks out a 1,006rwhp from his Vortech supercharged package. Thanks to a close working relationship with Lund Racing, a noted tuning shop that specializes in ECU calibrations, and Finish Line Performance, Reeves was quick to get his steed into the low 9s and he is now taking aim at the 8s.

“At the end of the day, we have a formula that we go by and it includes a Vortech supercharger kit, Fore fuel system, E85 conversion, and Lund Racing calibration,” states Reeves during our interview. It is that supercharged package that has brought him plenty of 8-second timeslips from his street cars over the years. But this one just seems a bit simpler than his 2015 and 2011 Mustangs before this model. He shared, “I think the higher compression engine we have from MMR and this new 10-speed automatic transmission are a big part of it.” He cites lower boost pressures from the Vortech YSi-B centrifugal blower to net similar power to his 2015 Mustang GT, which had a near identical package bolted on to a Gen 2 Coyote.

The third generation Coyote in Reeves’ 2018 model is a fairly straightforward build from MMR—a stock block has a set of aftermarket sleeves installed for durability. The California-based engine builder then added custom Manley forged pistons (11.2:1 compression) and steel rods, and they kept the factory crankshaft. The cylinder heads are just a Stage 1 set with upgraded valvesprings from Manley and the camshafts are stock as new cores aren’t available yet. The Vortech kit has the factory air-to-air intercooler, but Reeves installed a 10-rib belt-drive system. He also bolted on the aforementioned YSi-B head unit and the boost pressure is set to 19 psi. Kooks was tapped for the complete exhaust system from the long-tube headers to the tailpipes.

And while many thought the new direct injection would’ve been the biggest holdback, Reeves happily reports that Lund Racing has a handle on it. “Lund Racing jumped on really early with the direct injection tuning. A lot of tuners want to turn off the DI, whereas they want to keep it active,” he explains. Giving a bit more detail, Reeves says that roughly 30% of their fuel delivery is done through the direct injection setup. It wasn’t always that way, the two groups started at 70% fueling from the secondary set of injectors.

At a race weight of 3,950-pounds, Reeves has carded a best sixty-foot time of 1.54 thanks to an assortment of Steeda suspension modifications. Finish Line Performance added Steeda’s Ultimate Stop the Hop package, billet vertical links, IRS sub-frame alignment kit, IRS sub-frame bushings, drag springs, and adjustable tow links. Also on the list of rear suspension modifications are Viking Crusader adjustable shocks. The Driveshaft Shop was tapped for half-shafts and one-piece driveshaft.
Reeves normally requests a point less of compression when he adds in a new MMR engine. But this time around, he had them keep it at around 11.2:1. The mildly rebuilt powerplant sees 19 psi of boost from the Vortech YSi-B supercharger. It is good for 1,006 rwhp, which was generated while making the dyno pull in sixth-gear.

While testing on the in-house chassis dyno at Finish Line Performance, Reeves said that they kept an eye on the fuel pressure. They would back off the direct injection fueling when the pressure went below 3,000 psi, indicating the fuel pump didn’t have enough volume to supply the fuel, especially since they are running E85. Each dyno pull resulted in less and less fuel delivery from the direct injection, until they reached the current supply volume of just 30%. The goal is to raise that percentage and Reeves is working with an unnamed company on a special pump for direct injection. He is also adding a set of DeatschWerks direct injection fuel injectors. The primary fuel system consists of a Fore fuel pumps and drop-in assembly, lines and fittings, and a set of Injector Dynamics ID1300 squirters.

“Once we get this transmission sorted out, I think this car will be really fast,” proclaims Reeves. He said they are working on a transbrake option, which will reduce his sixty-foot times from a best of 1.54-seconds down to the 1.40 range. Right now the rear IRS suspension benefits from a complete Steeda upgrade kit and a set of Driveshaft Shop half-shafts. Both have no problems planting the Mickey Thompson drag radials and surviving under the duress of the big power and nearly 4,000-pound race weight.

Reeves was quick to remind us that this is all being done with the stock torque converter. “The new 10-speed just works so great that it keeps the rpm in a great spot on the shifts with the centrifugal supercharger,” he says. Once they get a looser torque converter in the car and the transbrake working, the car should shatter the 8-second zone with ease.

As some people fear technology and the unknown, Reeves has tackled it head-on and adapted his supercharged package. The results are imminent 8-second times and development of new go-fast parts and pieces as the next generation of Coyote is ushered into the performance world.

The best elapsed time has been a 9.21 and the top speed on the dragstrip is 156 mph; the car sports all the factory amenities like heated and air conditioned seats, back-up camera, stereo system, etc. By the time you read this story, Reeves expects to be holding an 8-second timeslip.