Companion Car: Dan and Josefina Collins’ 1969 G.T. 350H was purchased as a driver, but it snowballed into a show-winning Shelby 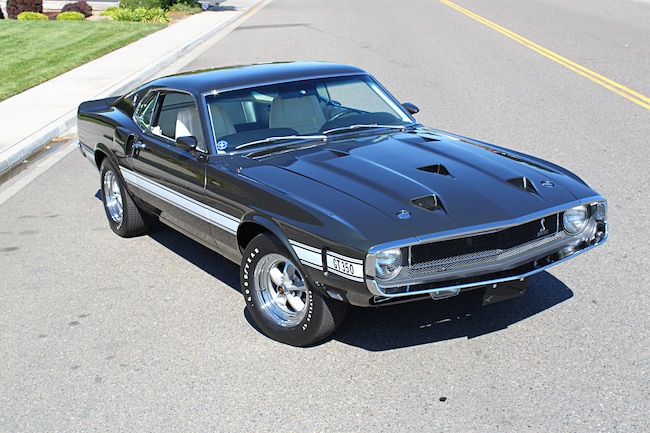 Dan Collins’ intentions were good. He wanted to find a 1969 or 1970 Mustang for his wife, Josefina, so she would have a pony of her own to take to shows and could display it alongside Dan’s restomoded 514ci ’69 Mach 1. A convertible or Mach 1 would be ideal. The Modesto, California, couple would fix it up, keep it mostly stock, and make it a nice driver.

Dan got real excited when he was told by a business acquaintance about a ’69 G.T. 350 in Livermore, California, that had been in storage for 18 years. “The car was parked in the garage and used as a storage rack,” Dan recalls. “There was stuff piled all over it.” On the plus side it was solid and ran. The prior owner was going to restore it, but had lost interest, so he was open to making a deal. With a 351 4V small-block, FMX automatic transmission, air conditioning, and just 78,000 miles on the clock, Dan thought this would be the perfect driver for Josefina and she would be comfortable in it as well. It was going to be awesome driving to the shows and showing off this Shelby with his Mach, Dan thought. Well, it didn’t go as planned.

As it happens so many times during a restoration, the goal changes and veers off in another direction. After the purchase of a Deluxe Marti Report it was discovered that this particular G.T. 350 was a little more special than most G.T. 350 Shelbys. This SportsRoof was one of only 152 such examples from 1969 produced for the Hertz Rent-A-Racer program. In fact, according to the Shelby American Automobile Club it was the tenth Hertz car built in 1969. The Black Jade Shelby was originally shipped to Horn-Williams Ford in Dallas, Texas, before being put into service by Hertz.

Dan had good friend and SAAC/Mustang Club of America judge Jeff Speegle give it a thorough look. Jeff felt that such a solid car with its unique Hertz history deserved a concours restoration. Furthermore, 1969 G.T. 350s don’t normally receive top-flight concours restos like their G.T. 500 brethren, so it would make it a unique piece on the show field. After much thought Dan and Josefina decided this would be the route they would take their Shelby. But this would be uncharted territory for Dan, since he is an old hot rodder deep inside. Finding N.O.S. parts and researching minute details like batch paint isn’t how Dan grew up as a car enthusiast. Jeff would have to take the reins and educate him as they went along. Dan enthusiastically was willing to learn and get involved.

The Shelby was shipped to Terry Simpson and his crew at The Restomod Shop in nearby Stockton, California, for its resurrection. Though known for creating some wild restomods, their craftsmanship would work well in a concours restoration with Mr. Speegle’s influence and guidance. The gang at The Restomod Shop, along with Jeff, Dan, and Mark Vasquez, spent the next two years restoring the Shelby for competition in the SAAC Division II class and MCA Concours Trailered class.

No details were overlooked in the restoration. Jeff made sure that the batch paint that covered the floorpan was correct for the time period this Shelby rolled off the Dearborn assembly line. The proper amount of overspray was shot; the correct application of undercoating, sound deadener, and seam sealer was also applied. Once the shell was completed the drivetrain was reinstalled. The Windsor had been previously rebuilt so just detailing was needed in this area. Dan was able to score the correct and hard-to-find Autolite adjustable shocks. Even an N.O.S. transverse muffler and Autolite FA-50 air filter were procured for the restoration.

Inside the Shelby didn’t need too much work. Jeff, Dan, and Mark were able to refurbish many of the original components. The high-back bucket seats were sent over to Fowler’s Auto Upholstery for new white Comfortweave skins and a new headliner as well. The original Faria oil and amperage gauges were known to fail and many were converted to Stewart Warner units. Dan had the original amp gauge, but the oil pressure gauge was previously swapped. A visit over to the eBay auction site yielded an N.O.S. unit after Dan convinced the seller to end his auction early. Unfortunately, even though it was new, it was found to be defective. Not to be deterred, Dan had it sent out to be restored—another challenge had been overcome.

Again, no detail was glossed over. Jeff and Dan took the time to make a new rear license bracket using galvanized steel plating and restamping it with the Armco Zinc Grip imprint. A small bag sits in the spare tire with standard lug nuts. Dan said Ford sent this bag to the original owners after discovering that the chrome lug nuts on the exterior wheels would not properly secure the space-saver spare tire when it was in use. They even duplicated the old-school Dymo label that Hertz had applied back in ’69 on the driver’s doorjamb with its identification number and in-service date.

Dan and Josefina’s snake-bitten Mustang was completed just in time to make its debut at the Mustang Club of America Grand National in Bellevue, Washington, in July 2010. But even when they arrived at the show, the couple spent hours detailing the Shelby the day prior to placing it on the show field. Their efforts were rewarded with a Gold Award in the Shelby Concours Trailered category. One month later at SAAC-35 at Infineon Raceway in Sonoma, the pair grabbed Gold in the Division II class. Their Shelby had just captured two highly coveted awards in less than two months. They were ecstatic.

The following year the awards kept coming, including Best of Show at the Grand Opening of the Muscle Car Exhibit at the California Automobile Museum and an Award of Excellence and Best Paint at the Mustangs Plus Spring Display. Since then there have been two more MCA Gold Awards to display in the trophy room. Though Josefina isn’t driving around in her Shelby to shows with Dan, they are having a blast taking it to all the shows. “She is very proud of it,” Dan says. “She loves meeting all the people at the shows.”

Looking back at it now, Dan admits it may have been wishful thinking that his petite wife could drive the Shelby on a frequent basis. He says she had to use a pillow in the Mach 1 the few times she had to drive it when they were younger. No matter how they arrived there, Dan and Josefina Collins now have a show-stopping Hertz Shelby to go with their Mach 1, and they will have the pleasure of displaying it throughout the country for years to come. As a couple.