The Gold Rush! The Rarest Hardtop Mustang of them All? 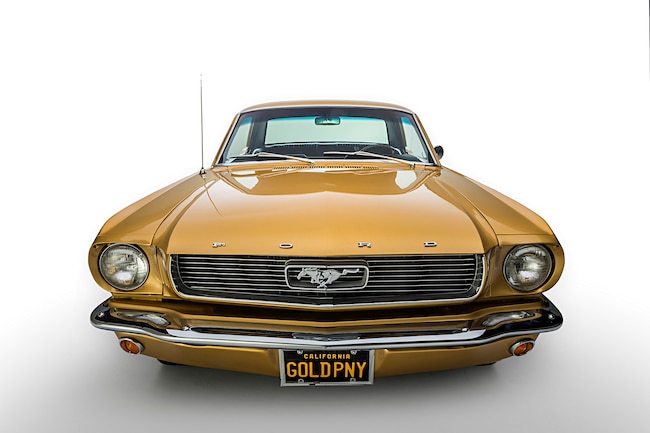 Fifty years is considered a golden anniversary. In marriage, that landmark of time together is significant for its incredible longevity, and it means that you’d better get your significant other (especially the wife) something shiny made of gold or you’ll be in big, big trouble. The Mustang celebrated 50 years of continuous production just a few years ago, but the model’s real golden anniversary happened in 1966, a year and a half after the Mustang debuted.

When the millionth Mustang was about to roll off of Ford’s production line after only a year and change, those in charge at Ford realized they had to commemorate it somehow, and the Golden Anniversary Mustang was born. A total of 50 (hence the Golden Anniversary) Mustang hardtops were built in the San Jose, California, plant on March 29, 1966, with 289 2V engines, automatic transmissions, and Deluxe black Pony interiors (though two had Parchment Pony interiors). They were painted Anniversary Gold (which had no paint code) and had six-digit DSO codes of 331111, but were otherwise identical to other 1966 Mustangs.

The 50 Mustangs were sent out to each Ford Division sales district as a special promotion to celebrate the millionth Mustang built, and it is thought that most, if not all of them, were given away by those dealers. One such example was the “Treasure Chest” promotion that was done by Metke Ford in Bellevue, Washington. Area residents were mailed a key that could potentially open a locked chest containing keys to the Golden Anniversary Mustang in the showroom.

Mustang Monthly has been following the story of one of the Golden Anniversary Mustangs, the one you see here, since 2009 when Delia Wolfe contacted Brad Bowling and Jerry Heasley about her Mustang. Ms. Wolf purchased this car from the original owner’s children, who told her the story behind the car.

Alfred and Margaret Thomas, the original owners, received the golden key in the mail just after Alfred had returned from his service in the Air Force at McChord Air Force Base in Tacoma, Washington. (In a nice coincidence, Alfred also happened to have been a Golden Gloves boxer.) The story goes, as Alfred returned from his duty, he took his wife to buy a dress that she wanted at a local antique dress shop. As she was looking at the dress, Alfred popped into Metke Ford in Bellevue, Washington. He took the “Treasure Chest” key sent to them in the mail and, lo and behold, his key won the 1966 Golden Anniversary Mustang.

Mr. Thomas’ family had kept the car many years after their parents had passed away. Son Mark Thomas still chuckles about driving the car into a tree on the family’s property. His brother-in-law attempted to restore the car at one time, but after years in desperate need of a proper restoration, the Thomas family sold the car to Ms. Wolf—after she gave her heartfelt promise to preserve and, one day, restore this golden treasure to its original glory. Ms. Wolf is a BMW mechanic so she knows about cars, but after time and her research into what the restoration was going to take, she realized it was beyond her abilities and decided to sell the car.

Fast-forward to 2015 when Los Angeles resident Eric Ruimy was on the Internet looking for a good 1966 Mustang to restore for his best friend’s 16-year-old son, Andrew Marchasin, for his first car. After Eric had read all the information online and after speaking to Ms. Wolf for many hours, Mr. Ruimy knew two things—this was no ordinary Mustang and this was not a car for a 16-year-old kid. Eric then contacted Brad Bowling and Mustang Monthly’s Mark Houlahan, who took the time to explain and educate him about the exciting and rare car he had just found.

Then the real fun started. Eric, being a classic car collector himself for over 30 years, started calling on all his resources and people he knew in the Mustang world. Ray Carmody at R3, Inc. saved the integrity of the factory body and painted this car three times to get it perfect. The car then went to Eric’s old friend and Mustang expert, Scott Andrews, at California Mustang and Collectibles. Eric knew Scott was the right person to help him keep Ms. Wolf’s promise of bringing this lovely car back to its original condition, and Scott would give the car all the love it deserved.

After two years the restoration was finally complete, and then came the even harder decision for Eric. Should the car go to The Ford Museum in Dearborn, Michigan? Should it go on the Mustang show circuit to educate people and showcase the rarity of the millionth Mustang? After all, not a lot of people have ever even heard of a Golden Anniversary Mustang, let alone realize that only 50 of them were built. And of those 50, only five are known to still exist, making the Golden Anniversary Mustangs the rarest of all the hardtop Mustangs built.

Of course, functionally the Golden Anniversary Mustangs are just standard 1966 hardtops with 289 2V/automatic combinations, and there are thousands of those out there still on the streets. Certainly some of them may have been repainted different colors over the years, so who knows for sure? Eric has created a website and registry dedicated to finding the ones that may still be out there at 1966GoldenMustang.com. If you happen to run across a ’66 hardtop with a door code of 1111 and a blank paint code with a March 29 build date, chances are that it is a Golden Anniversary Mustang and Eric kindly asks you to contact him at the website. 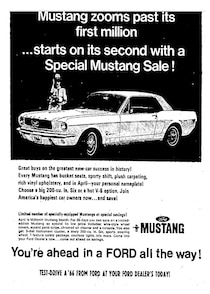 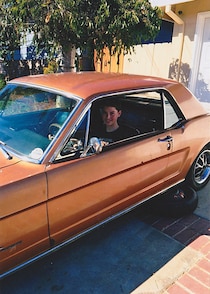