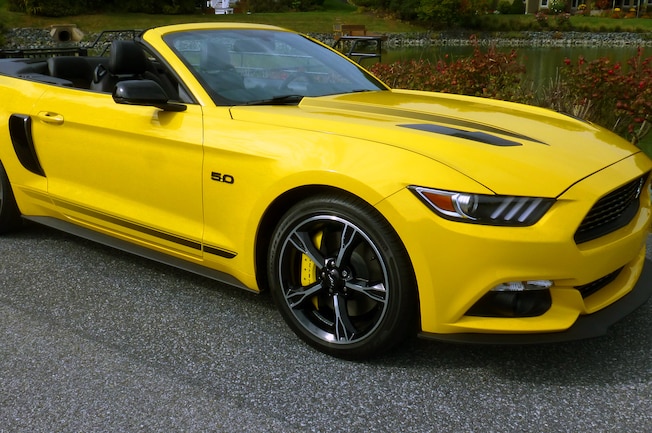 John Rosko from Hockessin, Delaware, has graced our Snapshots department before with an SN95 Mustang GT back in 2016. Now he’s back with a 2017 Mustang GT California Special convertible in Triple Yellow Tri-Coat that he special ordered the way he wanted. His first mod was to get rid of the hood prop and add MMD hood struts, and soon after he removed the intake to a cabin sound tube. Rosko then started adding chrome and yellow appearance mods under the hood, and he added black side scoops to keep up with the California Special theme. Other modifications installed are a coolant tank cover, a master cylinder cover, a fuse box cover, a painted engine plenum cover, painted fuel rail covers, yellow caliper covers, custom GT/CS embroidered floor mats, a chrome underhood dress-up kit, chrome strut tower caps, glossy black 5.0 fender emblems, a JLT oil separator, a Stage 1 interior LED lighting kit in Cool White, and a side-view mirror puddle lamp lens tint in yellow. Rosko is now ready for the 2018 car show season and has his own car show display poster ready to go.