The Snowball Effect: George Lange has had Alloway’s Hot Rod Shop build cars for him before, but this one ended up differently 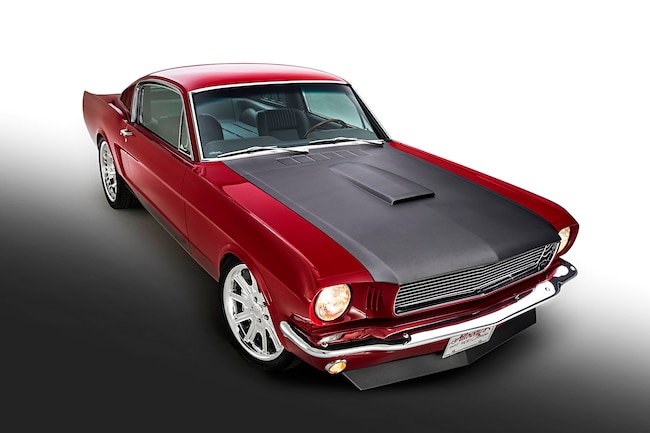 Every shop has that one great customer—that one person who truly enjoys the process of the build and keeps coming back again and again for the next car. Some of the builds stay in the collection, and sometimes they move along to allow room/finances to build the next best thing. For Alloway’s Hot Rod Shop that customer is George Lange, one of its longest-running customers. Lange, of St. Louis, has had numerous memorable cars built at Alloway’s. As a matter of fact, we’ve featured several of them in the past here in Mustang Monthly and our sister titles. Just hit Mustang-360.com and you’ll find features on previous builds like his 1967 Fairlane with a Boss 429 and Art Morrison chassis, Lange’s 1967 Mustang with twin-turbos, or his 1957 Thunderbird with a supercharged small-block!

One of Lange’s more recent builds was a 1969 Camaro for his son. Alloway’s Hot Rod Shop built it as a safe driver and utilized suspension from Detroit Speed (DSE). Lange was so impressed with how the suspension worked he went back to Alloway’s to have a nice driver built for himself with the same suspension. A driver that he could actually take to the track and beat the hell out of at will. Lange has had Alloway’s build a couple of Mustangs in the past, but never an early fastback. Of course Alloway’s crew didn’t have to look too far for a starter vehicle, as they had several fastbacks out back in inventory, so to speak.

What started the whole snowball effect—the custom Billet Specialties wheels arrived in a full polish. We’re thinking they made the right decision here!

Once inside, the fastback was blown apart to begin the process. The DSE front and rear suspension was ordered up and the wheel and tire package was spec’d. Like most shops, the wheel and tire setup determines chassis and body modifications. Building around the wheels gives the final look the owner and the shop are looking for. In this case 18x9 front and 19x12 rears were planned. However, when the custom-designed Billet Specialties wheels arrived and the boxes were opened, the crew found a set of full polished wheels that weren’t supposed to be polished. They were supposed to have a painted/coated center. “They were so pretty we hated to sandblast them and coat them. From there the build just snowballed. Now, it’s too nice to take on the track,” Alloway’s Toby Caldwell explained of how the project grew.

At first blush the engine bay looks like it’s just stuffed with a typical small-block with a lot of chrome. However, when you look closer you start to notice the Cleveland-pattern valve covers, the water crossover for the intake, and other racy bits. That’s a true Trans Am–bred Robert Yates 310ci small-block right there!
An Alloway’s Hot Rod Shop detail here: using stock parts with minor tweaks for better fit and looks. This is one tightly tucked and perfectly aligned bumper!

With the decision to leave the wheels polished the fastback project took off with renewed fervor, and the original design plans went completely out the window. Every aspect of the project, from drivetrain to interior to even the exterior color, exploded with custom touches. That eye-searing red paint was certainly one of them. A lot of Alloway’s projects are painted black; it’s a color the shop is known for, but in this case Lange’s fastback was sprayed 2018 Porsche Carmine Red. A big departure from the norm for this shop. What’s not a break from tradition for Alloway’s is building a nearly stock-looking ride with tucked bumpers, perfect gaps, and more. This ’65 fastback received all those touches along with a fiberglass Shelby-style hood and laser-straight bodywork before the PPG base/clear was applied. You may notice the ’66 Mustang model year “egg crate” grille in the nose instead of the year-correct ’65 “honeycomb” grille. As Caldwell states, “We’re building a hot rod, not a year-correct hot rod, so we use what we feel looks best.”

Besides the aforementioned DSE AlumaFrame front and four-link rear suspensions, Alloway’s Hot Rod Shop fitted Wilwood 13-inch brakes with 6-piston calipers at all four corners. To fit those massive rear hoops, DSE mini-tubs and a DSE fuel tank were utilized. A Currie Enterprises 9-inch stuffed with 4.10 gears and limited-slip differential got the nod out back. With fresh Toyo Proxes T1 Sport rubber, the Mustang was on the ground and ready to get wired, the interior handled, and the engine bay stuffed with some horsepower.

Simple and functional, another Alloway’s trademark. No crazy custom console or a custom fiberglass-filled dash with a dozen gauges in it. Nope, just a stock five-dial housing with subtle Classic Instruments gauges, an ididit tilt column, and a period-look wood wheel.
The rest of the interior follows suit. Using old hot rodder tricks, the interior comes together nicely with a stock appearance and modern touches of leather and chrome.

Inside, the interior was given the same Alloway’s signature look as the exterior—a nearly stock feel with a few subtle tweaks. For example, the gauge cluster is a stock housing, but it’s stuffed with custom Classic Instruments gauges. An ididit tilt column with a Shelby-style Teak wheel was used, along with cut-down and reshaped Recaro seats custom-covered in gray leather by Steve Holcomb of Pro Auto Upholstery in Knoxville, Tennessee. Under the Daytona Weave custom carpet is a full complement of Dynamat products as well. A Vintage Air system keeps things cool in the cabin and the only tune Lange cared to hear was the beautiful sound of the Borla Atak mufflers shouting their spent gasses, so the dash got an OE radio delete block-off panel.

Speaking of spent gasses, if you’ve scrutinized those engine bay photos you’re probably scratching your head a bit at the valve covers. Is it a Cleveland? Is it a Boss 302? Just what is under the hood? Well, what you’re staring at is an honest-to-God Robert Yates 310ci Trans Am engine. The engine was built by Mylon Keasler at Keasler Racing in Maryville, Tennessee, and features a billet Crower crank swinging Crower Maxi-Light rods and JE forged pistons. A custom grind Crower cam controls valvetrain in the Yates heads while a Jack Roush intake and 720-cfm Quick Fuel four-barrel tops it all off. Ignition is by Taylor and the headers were custom-fabbed by Barillaro Speed. It twisted the dyno to 613 hp at 8,100 rpm and 432 lb-ft of torque at 6,900 rpm. Backing the Trans Am mill is an American Powertrain manual transmission conversion kit consisting of a Tremec Magnum six-speed, crossmember, shifter, and more.

With the fastback completed it’s safe to say that Lange’s expectations were far exceeded, but there’s no way he’s taking this beauty on track now! It will join the other cars in his vast collection. There’s no word on whether Alloway’s Hot Rod Shop will be building a driver for track duty, but rest assured, whatever Lange has in mind next the crew at Alloway’s will certainly be getting the nod for the build. Let’s just hope the next one stays a little truer to form so Lange can get some seat time at his favorite track! 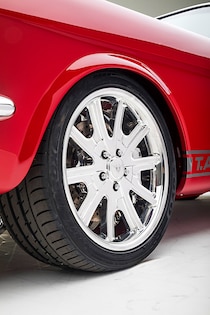