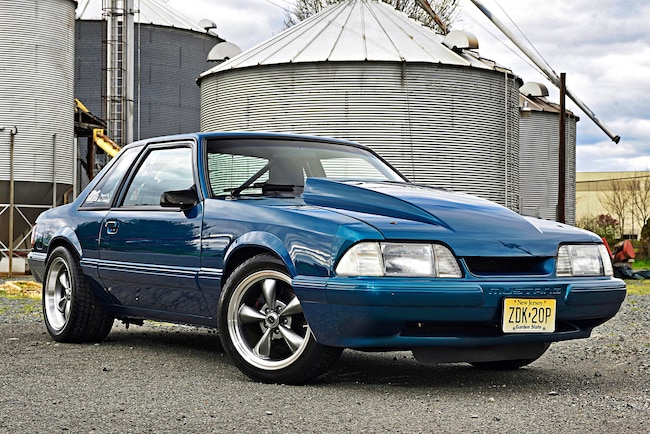 Buying a Mustang these days can be a confusing proposition. There are Coyote-swaps, Terminators, 2011-2014 Mustang GTs, and even the latest S550 cars. So many colors, engine combinations, transmission options, and the like, that settling on one Mustang is really tough. Then, once we get said Mustang, or actually, before we even get a Mustang in the driveway, our mind is running wild on what we’re going to do with it. We’ve built the car before the ink on the title is even dry.

We’ve changed out the stock engine for a built powerplant, swapped out the transmission for a beefier unit, and changed the gears to get the car moving at a more rapid pace right out of the gate. That doesn’t even cover the body and paint, which we’ve already performed a color change before we even have the car registered in our name.

When you think about all the work we want to do, it makes us wonder why more of us don’t take the same route as Eric Sutherland, the owner of this 1993 Reef blue coupe.

Knowing we’re going to tear apart a car, just to rebuild it, what most of us need to do is buy a roller, and start fresh. That’s exactly what Eric did. Instead of ripping out an engine, transmission, interior, and the like, only to put back together, Eric found this car and started from scratch. “Jimmy C and I were in the middle of building my 1986 GT when I mentioned I would really like a notchback,” Eric says. In Eric and Jimmy C’s home state of New Jersey, notchbacks are king, but finding a good one can be difficult.

Fortunately for Eric, Jimmy C has connections. One of those connections is Mike Mohring, and Mike always has Mustangs, and most of them have a price. Mike had a former four-cylinder coupe, and he was thinking about throwing a Brand X engine under the hood. Once Eric found out about Mike’s plan, he wanted to take a closer look. “I paid Mohring his asking price, and dropped the roller off with Jimmy C,” Eric says.

Anthony DiSomma Racing put together the 363ci engine using an Eagle forged crank and I-beam connecting rods, Diamond pistons, a custom-spec Bullet/Brian “Freezy” Friedentag cam, and a boost-friendly 8.5:1 compression ratio. Edelbrock Victor Jr. heads made a stop at Fox Lake for custom porting, while a Trick Flow Box-R intake ingests incoming air from an Anderson Ford Motorsport Power Pipe. The pipe is needed to get 18 pounds of boost from a Vortech Ti-Trim supercharger into the intake, which gets cooling charge assistance from a ProMeth Volute Injection system.
A Glenn’s Performance fuel system with Holley fuel injectors and Behind Bars Race Cars fuel rails feeds the hungry combo, while an MSD ignition system works with a Demon coil, Moroso spark plug wires, and NGK plugs. Brian Friedentag also tunes the combo using a Holley HP EFI system to the tune of 700 horsepower at the wheels.

What started Eric and Jimmy C down this path was the fact that the 1986 GT’s 363ci engine was at Anthony DiSomma Racing for a refresh. That’s when Eric decided to change the course of the build. By the time Jimmy C had the roller, the engine was back from DiSomma’s and it was time to get to work. Jimmy C installed the drivetrain, which consisted of the freshened 363, a Hanlon Motorsports-prepped Tremec TKO transmission with a McLeod RXT clutch and a Pro-5.0 shifter, an aluminum driveshaft, and a built 8.8 rear with Moser 31-spline axles and a 3.73 gear.

Jimmy C sourced a complete black interior for the car, which included 2005 Mustang seats, an 8-point roll cage, a plethora of Auto Meter gauges, and a Florida 5.0 gauge cluster. That is a Pro-5.0 shifter connected to a Hanlon Motorsports-massaged Tremec TKO 600 transmission with a McLeod RXT clutch.
“What I like most about the car is the power it delivers and how well it drives,” Eric says. Jimmy C adds, “If you’re just cruising the car is really quiet, but once you hit the gas, it just goes.” In street trim with the 17s and front sway bar attached, the car ran a 10.28 at 142 mph. “I want to take it to the track again and see if we can get it into the 9s,” Jimmy C says. Eric would like to thank Jimmy C for his amazing mechanical skills, Stan Bachonski for his awesome welding and fabrication skills, and Brian “Freezy” Friedentag for his “tuning wizardry,” as Eric says.

At first, the car was just going to get a simple repaint, but at that time, winter was coming so it was decided to take the time and do it right. Aaron Pennise and Jason Abrams handled the paint and body using Diamont basecoat/clearcoat. The car was originally Reef Blue, but the guys seem to think the car was painted red at one time, but repainted Reef Blue prior to Eric getting the car. Aaron and Jason smoothed out the body and added new Reef Blue to the car’s panels. The body was treated to a cowl hood and a front grille delete.

Once Jimmy C’s work was done, Rich says, “I received a car that was equally at home, at a car show, or the track and the car is a pleasure to drive.” 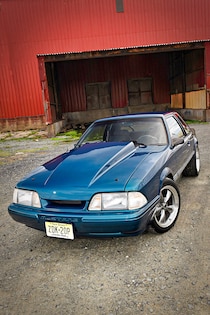 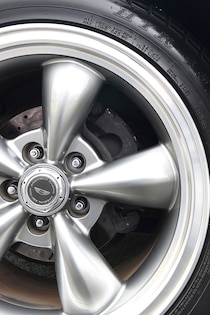 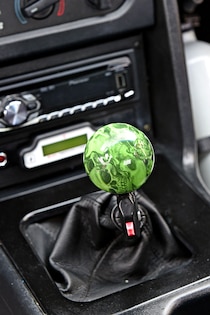