Rethinking Sports Car racing, Ford Performance is offering a race car for the masses with the GT4 Mustang

Sports Car Racing for the Masses: Designed to give high-tech engineering to the privateer, the turnkey Mustang GT4 platform takes on global racing—you just need $250,000 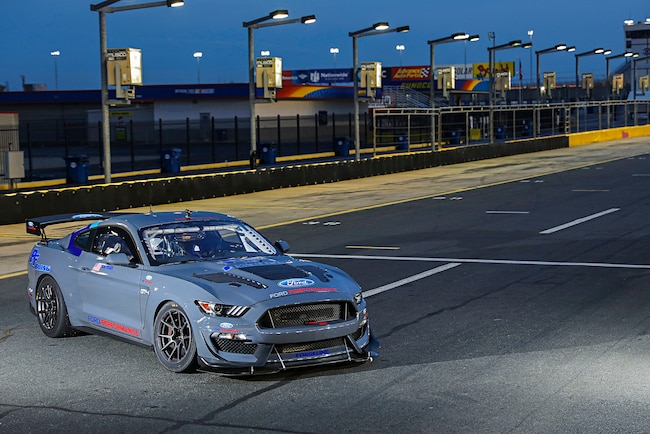 Racing isn’t cheap, that’s a cliché, but Ford Performance and Multimatic Motorsports have been making a strong effort to make it more affordable. Based on the championship-winning GT350R-C, the GT4 Mustang is the new muscle equipped to race around the globe.

The GT4 platform is one of the latest to go through the homologation process. Recently approved by the SRO Motorsports Group, the GT4 will compete in multiple series including the Pirelli World Challenge and IMSA Continental Tire SportsCar Challenge, along with several European series. Homologation refers to the process of certifying and approving a product to meet regulatory standards—aka, a race car that’s pre-approved by everyone. This helps to get a grip on expenses, encouraging competition amongst driver skill rather than wallet size.

“Once the cars homologated there’s not a lot to change. Making it so there aren’t multiple engines and suspension components to carry to the track and it makes cars equal,” said racer and team owner JR Pesek of Harrisonville, Missouri, who owns three GT4 Mustangs, including this one.

This carbon fiber Ford Performance aerodynamic package was engineered using wind tunnel testing. We caught up with the car at Charlotte Motor Speedway.

“Locking down the rulebook gave a lot more confidence to build a car,” said Multimatic Motorsports Manager Sean Mason. Previously, the starting lines at series like IMSA were thinning out. A typical IMSA field was between 8-16 cars. “The series was honestly not in good shape,” said Sean. “The GT4 program is breeding new life into the sport.”

We caught up with JR’s GT4, while running test laps at the new Charlotte Roval. “It’s a dream to drive, it’s beautiful with paddle shift, sequential transmission, and probably one of the first Mustangs to really utilize aero,” said JR about the shift from the Boss 302 to the GT4 Mustang. "The Boss is a lot beefier, but the GT4 is a lot more technical. You can smack the curb and drive over it with the Boss, but here you must learn how to drive the car a little different.”

The car arrives as a turnkey from Multimatic, with an entry price of $250,000, but according to JR, it’s a better investment than before. "Everyone was trying to chase the Boss and the expenses went up, you’d have a $100,000 car with $250,000 invested,” said JR. "All those changes are made here up front and the driver is able to concentrate on driving the car. There’s more upfront cost, but in the long run it’s cheaper.” According to Sean the initial cost is high, but the GT4 gives advanced engineering development technology not formerly available to privateers.

The GT4 is a joint venture between Ford Performance and Multimatic to provide a turnkey race car that’s homologated to run in multiple Sports Car series. The intention is to bring down costs and drive up the number of teams.

Officials still mandate certain Balance of Performance rules on a given weekend, including restrictor plate size. There’s also a weight minimum and ride height minimum, which all work to seep the “horsepower cars,” competitive with European cars.

The cars are limited with their setting changes including three available spring sets (soft, medium, and hard), instead of the previous 30 sets. Sway bars, wing and spoiler are all adjustable, but not allowed to be swapped or replaced. Multimatic Motorsports also emails racers recommended track setups before each race weekend.

Through this assembly process the cars are significantly lightened, with the rear parcel shelf and double-walled panel supports removed. The bodies are then shipped to Multimatic for serious carbon fiber work. Only the quarter-panel and body jams are steel, the fenders are aluminum and the rest of the body is carbon fiber. Multimatic also builds the plumbing for the dry-sump oil system.

Built with durability in mind the GT4’s have stronger components than factory. “With all our cars, they’re 25 percent road car, 75 percent race car,” said Sean continuing about the car’s durability is intended to last multiple seasons.

A Sparco racing seat with six-point harness straps the drive in. A Ford Performance black suede steering wheel with ten custom controls keep actions close to the driver. The factory dash is used with customer carbon fiber mounts for controls. A MoTeC digital dash and data logger are also used.

“They’re not really a complex car to assemble, once you have everything on the floor,” said Sean. He explained the car is built from the center outward, and after experience of building 18 cars so far, they have it down to a science. “You have 160-200 hours of pure assembly time.” Multimatic’s assemble team is also the race team, as Multimatic runs their own GT4 car. “We’re in the series to better the car, not win the championship,” said Sean.

“Honestly, it’s a under performer in the car, but you don’t need the big horsepower for this style racing,” said Sean who wishes they’d allow for more power. According to Roush Yates the engines are set at 450 horsepower and 442 lb-ft. “It’s biased more to drivability than top end, with a strong pull through the rpm range.”

Exhaust is plumbed through a custom-built Kooks Headers GT4 exhaust.
This 5.2L, aluminum V8 features a cross-plane crank (unlike the GT350 flat-plane crank), and built by Roush Yates Engines. It’s topped by Ford Performance Voodoo heads with a valvetrain that’s built to withstand revs over 8,000 rpm.

Multimatic and Ford Performance are in the process of shaking down the cars and the program as the season begins. “It’s a ever changing process in that series all together,” said JR. “We all get to work together and run’em, and test’em and try different things.”

Now the competitors have the peace of mind to compete against those in the same product, the sanctioning bodies have a rulebook to enforce, they have a base line to go from.

Formerly JR raced a Cobra Jet, which he stopped racing for several years, until his son urged him to road race, “To me this is a lot more fun, there’s a lot more payback for your time.” Dad and son race against each other this season, as JR owns James Pesek’s number 10 GT4 car as well. We asked if he’s taking it easy on his son this season. He responded, “Hell no.”

NASCAR Monster Energy Cup driver Joey Logano jumped at the opportunity to turn some laps in the Mustang during a media track day at Charlotte Motor Speedway. He loved it so much that track officials had to flag him down to get him off track. He noted the car’s forgiveness and tire longevity. 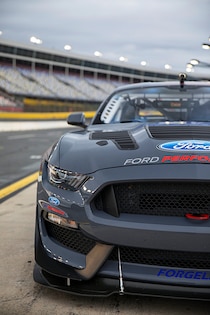