This 1966 Fastback Shelby Clone is a Family Heirloom

Family Heirloom: Bought new, this 1966 fastback is still racking up miles and smiles 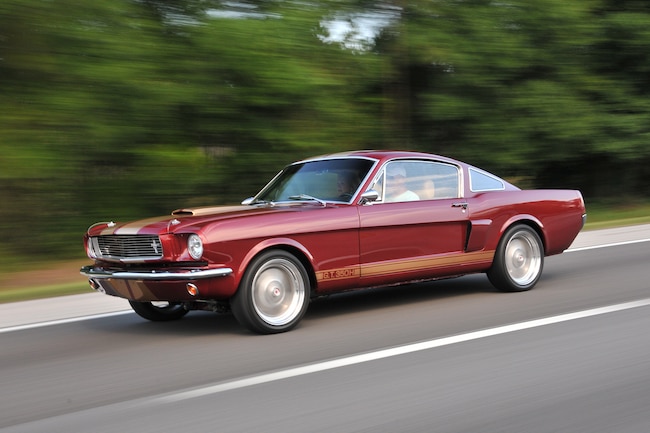 It’s always interesting to find out how individuals become bona fide automotive enthusiasts. Some grow up in enthusiast families with cool cars always in the garage, while others get involved as a retirement hobby. Even more embrace the sport around the time they are eligible for their first driver’s license. Steve Harrison knows exactly when his automotive love affair began. Steve, a commercial real estate specialist in Dacula, Georgia, recalls a specific car show, back in the mid-’60s in Atlanta. Ford had set up a booth with Shelby Mustangs and 427 Cobras on display. Steve had just finished helping his brother-in-law display his 1934 Ford coupe when the Ford rep came by, asking him if he would be interested in helping to detail their cars. Steve was eager for the opportunity to get close to the beautiful collection, and he smiles when he recalls that he got paid, but would have done it for free. From that point on, he was hooked.

When Steve married his wife, Jan, the family connection gave him a close look at another beautiful car, the 1966 Mustang fastback owned by Jan’s father. Purchased new, the car was well traveled, with many long-distance trips around the country. Both Jan and her mother took their driver’s test in this car, adding to the collection of family memories. When other cars came into the family, the Mustang languished for two decades under a tarp. When Jan’s father passed away, Steve bought the car and began the long-term rebuild. With the help of his two boys, he began the restoration process, taking the car apart to assess the damage, and quickly discovered it was extensive. Realizing that professional help was the best approach, he contacted Don Head of Don’s Collision Center in Lawrenceville, Georgia.

The long list of replacement parts began with the firewall, front and rear floorpans, all the sheetmetal in the trunk, various pieces of metal around the trunk and back window, doors, front fenders, hood, bumpers, and more. It might have been better to start with something new, but nostalgia and the family connection were important. The rotisserie restoration included a complete paintjob underneath, with the undercarriage finished as nicely as the top.

The goal for the car was to create a Shelby-style G.T. 350H with beefed-up engine, trans, and rear end, along with all modern conveniences like air conditioning, power door locks, power windows, and even a power trunk lid. Steve left the exterior essentially stock with the exception of a few tasteful Shelby additions beginning with a Shelby fiberglass hood and hoodpins, billet grille, LED headlights, bullet side mirrors, and open rear quarter-windows. Modern handling and performance began with removing the strut towers and installing a new Heidts frontend with rack-and-pinion steering. Total Control Products g-Bar rear coilover suspension upgraded the rear and SSBC power disc brakes on all four corners guaranteed modern stopping power.

With the exterior looking better than new, the final efforts were devoted to the stunning interior, accomplished by Wayne Lundy Interiors in Lula, Georgia. The plush seats came from Pro Car, purchased without upholstery so that Lundy could wrap the seats, door panels, and headliner in matching tan leather, using expanded metal accents in the door panels—a theme that he carried over to the beautifully upholstered trunk, now opening with electric actuators. The dash, center console, and carpet are black, while white-faced gauges from MP line the dash. Steve grips a Billet Specialties wheel on a Flaming River column, while the RetroSound stereo plays classic 1960s music through a center-mounted speaker and components in the kicks. Vintage Air adds comfort during warm Georgia summers. Several years ago, Jan sent the glovebox door to Carroll Shelby, made a donation to his charity, and now they proudly display Shelby’s signature. It was the perfect finishing touch.

Although it took almost a dozen years to rejuvenate, this half-century-old car is now a joy to own and drive. Shortly after these photos, Steve and Jan completed this year’s Power Tour, and Jan is sure that Dad is looking down and proud.