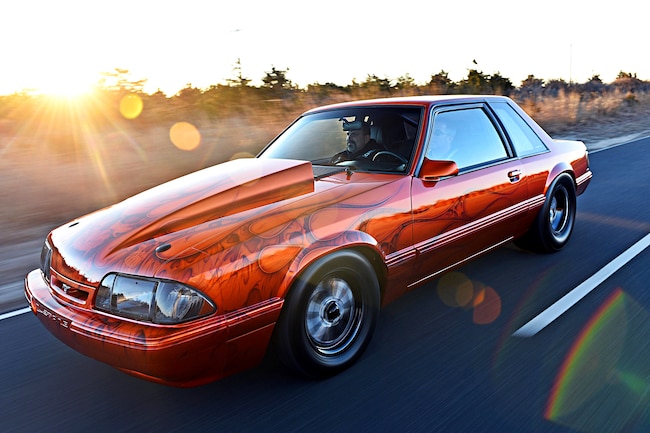 “The car came out really well…it’s probably my favorite pushrod car I’ve built,” Jimmy Chahalis says of Rich Brocchi’s 1991 Mustang LX. If you’ve been around the Mustang scene a few years, you know this is high praise. Jimmy C, as he is known, has been building Mustangs since most of you have been in diapers. He was one of the main technicians at the legendary LaRocca Performance for years. He’s built countless Mustangs, but it’s this LX coupe he counts as probably his favorite. Why is that? Well, let’s look at Rich’s coupe for a minute.

First off, look at that paint. Kevin Meisner used PPG’s Vibrant line of silver and orange hues to provide a base for which most of us would kill. However, Killer Kreations’ Freddy Sicoli followed up with House of Kolor orange with a special mix of red oxide for the flames, also spending a week on the hood mural to finish off the paint. Rich and car builder Jimmy C knows a Fox coupe doesn’t need much in the way of exterior mods, so the lone deviation from stock is a Cervini’s cowl hood. The paint does nothing but accentuate the stock bodylines, and nothing else was needed. However, every car needs wheels, and Rich’s coupe employs RC Components Exile-S examples up front and Comp Series Beadlocks out back. Mickey Thompson Tires are at all four corners with ET Street R 325/50R15 bringing up the rear.

Under the hood is what could be called a “Jersey Special.” If you’re from Jersey, it’s a tree-forty-seven! If you’re from anywhere else, it’s simply a 347. Car builder Jimmy C is no stranger to 347s, and with Rich’s car he went the easy route by sourcing a Ford Performance 347 Boss short-block. It’s filled with the good stuff, but it allows the end user to add their own cam design, heads, and intake. To fill those gaps, Jimmy C chose a Brian “Freezy” Friedentag-designed cam, Trick Flow High Port 225 heads, and a Trick Flow R intake.

It wouldn’t be a Jersey car if it didn’t have a big Vortech supercharger, and Jimmy C chose the legendary YSi version, augmented by a ProMeth volute methanol injection system. The driver’s mount arrangement is good for 25 pounds of boost, but making sure everything is working in concert takes more than an engine and a supercharger. The fuel system consists of a Weldon 2025 fuel pump and regulator, custom lines, and 120-lb/hr injectors. An MSD Programmable 6 ignition with Taylor wires and NGK spark plugs lights the fire, while a Holley HP EFI unit controls spark and fuel. Stan Bachonski modified a pair of Kooks 1 7/8-inch headers, along with the X-pipe to get everything mated to a pair of Spintech mufflers. “Freezy” did his magic on the keyboard to the tune of the combination making 937 horsepower and 733 lb-ft of torque.

Behind the wicked small block is a Ziggy Performance-built automatic with a PTC 4,000 RPM stall converter, manual valvebody, and transbrake. A Driveshaft Shop aluminum driveshaft leads back to a Bryan Cranston-narrowed 8.8 rear with 9-inch ends, 3.73 gears, and Strange Engineering 35-spline axles and spool.

In the end, there are so many things Rich loves about his car. He loves the paint, the custom center console, the car’s stance and wheels, and so much more. “I have had a love for these cars since they came out and I have owned 17 of them,” he says. For Rich it all started with his great friend Jon “Crazy” Yates.

Does it end here, though? For Rich, it doesn’t. Jimmy C tells us Rich has another Fox car in the works. Therefore, whether this Jersey Special remains Jimmy C’s favorite remains to be seen.

There aren’t many cars that look better than a Fox coupe, if any, but Rich’s LX is augmented with a Cervini’s 4-inch cowl hood and fiberglass trunk lid, RC Components wheels showcasing Baer brakes, and a custom Kevin Meisner-paint with Killer Kreations (Freddy Sicoli) custom flames and hood mural. Now you can see why you’re reading about this car.

When it comes to Fox Mustangs, black is the most desired interior color. Corbeau seats and 5-point harnesses replace the factory seating, while an 8-point bar keeps Rich safe. Keeping Rich abreast of the mechanicals is a Holley digital dash within a Florida 5.0 cluster with a custom indicator lighting. The shifter is nestled into a custom console and connected to a Ziggy Performance-built Turbo 400 with a PTC 4,000-stall torque converter, B&M cooler, and manual valvebody.

Rich sends special thanks to the car’s builder Jimmy Chahalis, Chiseled Performance for the fuel/meth tank, Stan Bachonski for the car’s exhaust and supercharger tubing, Brian Friedentag for the cam and tune, and RC Components for the wheel package. 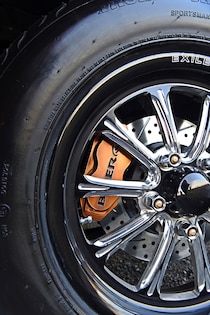