The “Not Gonna Sell It” 1968 Mustang California Special 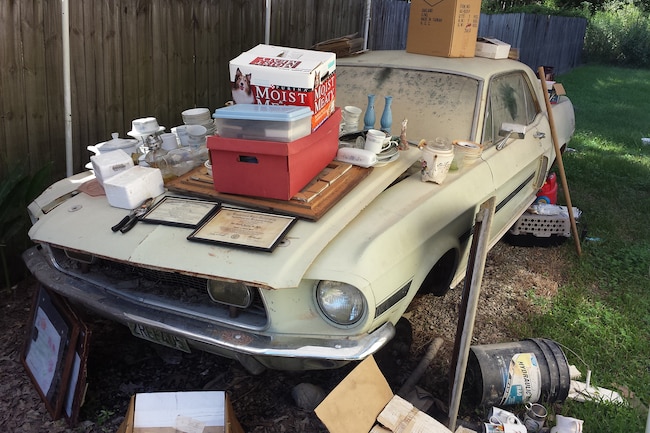 As Thad Landaiche drove closer he thought to himself, “Oh man, I think that’s a California Special.”

A woodworker with his own cabinet shop in Baton Rouge, Thad is vice president of the local Mustang club. Since 1979, he has owned a bunch of classic Mustangs, including his prized possession, a 1968 Shelby G.T. 500 KR. “I’m always looking,” he said.

A business trip to buy a bandsaw advertised on Craigslist led him on a 20-minute drive to the small town of Denham Springs, Louisiana. While there Landaiche took the opportunity to car-hunt the neighborhood, and sure enough, he spied a 1968 Mustang hardtop partially covered with debris and parked on the side of a house.

Landaiche pulled in the driveway and knocked on the front door. A young lady, who he said was “living in her Daddy’s house,” answered. “She told me it was her grandfather’s car.” The ’68 hardtop turned out to be a real California Special. The grandfather bought the car brand new when he lived in California. Landaiche heard a typical story; the grandfather and his son were going to fix up the Mustang. This was three years ago, in 2015.

Thad spotted the California Special, as seen here, covered with debris and parked alongside a house in 2015.
Thad noticed a dollhouse had been stored on the rear package tray.

“I would go by, periodically, to see if it was still there; and, naturally it was always there. I kept calling and they would say no.” In August of 2016 the Baton Rouge area was hit by devastating floods from more than 20 inches of rain in three days. The Mustang got slightly flooded, along with the house, and Landaiche says, “everybody needed money,” but the car was still not for sale.

“Then, about six to eight months ago I called and they said they had traded it to the A/C man to do their air conditioner work [on their house].” The California Special still had not moved, but now a guy named Pee Wee owned the Mustang. Landaiche called Pee Wee, only to run up against another no-sell owner.

The owner showed resolve not to sell when he built this makeshift carport, heavily damaged by heavy rains in the August 2016 flood.

Pee Wee was more of a Chevy guy, but liked the Mustang because it was a California Special. “I told him I had a Shelby and would like to have that car to go with my Shelby. Then, he said he would think about it and call by the end of the week.” A week passed with no call, and then on March 30, 2018, Landaiche went to a local car show and was surprised to hear a man addressed by the name Pee Wee. “So, you’re Pee Wee! You were supposed to call me last week!”

The GT/CS logo remained in the fiberglass sidescoops.
California Special script remained on each rear quarter-panel.
The license plate revealed 1992 as the last year the car was registered for the street.
The stock engine was intact: a C-code 289 two-barrel V-8.
The Seafoam Green California Special came with Ivy Gold Vinyl standard bucket seats and a C4 automatic transmission.
From the back, Thad could see many of the California Special’s unique features: a fiberglass trunk lid and quarter extensions; Thunderbird taillights; pop-open gas cap; and body striping.
The foglights were intact, as was the blacked-out grille with no chrome-surround or running horse emblem. However, the two quarter-turn hood locks were missing.