All in the Details: Nick Meyer left nothing unturned in the build of his 1993 Cobra…or did he? 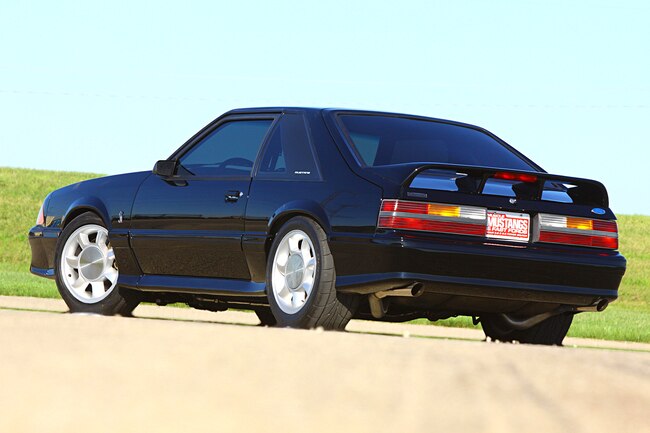 If you’re sitting there wondering, “How can I get my car in Muscle Mustangs and Fast Fords magazine,” Nick Meyer’s Coyote swapped 1993 Cobra should spell it out for you. When it comes to Mustangs, we’ve seen it all. Cars that look amazing from an exterior standpoint only to be cobbled-up under the hood, mismatched door jams, or more interior colors than a box of crayons. The wrong wheels are certain to get you shut down on a feature request; all you have to do is peruse any of our recent issues, and you’ll get a good idea for what we’re looking for.

Just like a good rapper, your Mustang needs flow. All modifications have to be implemented to make the car one single unit. When it comes down to what we’re looking for, it’s all in the details, people.

What Nick wanted with his Coyote swapped Cobra was that it look totally stock on the outside, but with subtle details giving away what’s under the hood. “Significant time was spent to custom fit the turbo setup, A/C, and power steering all behind the stock hood and front bumper,” Nick says. “Just one example of small details is the fog light brackets are tig-welded from intercooler piping to keep all stock look,” he adds. A Donathen Racing front crash bar and lower radiator support lives behind the stock front bumper cover. The wheels are Cobra 17x9 replicas in a 5-lug arrangement, with the rears widened by Weldcraft to a 17x10.5.

Nick Meyer’s 1993 Cobra left no bolt unturned. Every aspect of the car was improved to make it worthy. He covered all the details…

Yeah, about that. Since we’ve seen so many Mustangs, while shooting his Cobra we noticed something was amiss. The black paint was flawless, the interior was nicer than a Fox should legally have the right to be, and under the hood, you could eat off the engine’s intake cover. Ya know what, we’re not gonna tell you the small detail he missed. We’ll see if you can pick it out.

Anyway, Nick fell in love with Fox Mustangs while in high school, starting out with a 1988 GT at the ripe young age of 17. “I saved half the money for the car and my aunt loaned me the other half,” Nick says of how he made the deal happen. “I was hooked,” he added. Shortly thereafter Nick’s best friend Wilson Adams IV bought a 1991 GT. “We spent all our weekends working on the cars,” Nick says. That first Fox was definitely not Nick’s last. “I’ve had numerous Fox Mustangs over the next few years,” Nick told us.

Nick started with a 2014 Coyote crate engine, but he had Fonzie Novelo build it to Aluminator specs using forged pistons and Mahle H-beam connecting rods with ARP 2000 fasteners. The heads and intake are stock, but the fuel system is bolstered with a 2003-2004 Cobra fuel tank, Walbro 340 pumps, a Fore Innovations regulator, and ID1300 fuel injectors. The turbocharger is a Precision 76mm with a Vortech intercooler, 44mm wastegate and 50mm blow-off valve, and custom hot and cold side piping. CG Fabrication headers lead back to a 3-inch exhaust that has been painstakingly tucked close to the underside of the car. Behind the Coyote is a Tremec T56 Magnum with a McLeod RXT clutch and a custom driveshaft. Jordan Performance and Racing handles the tune, and so far the combination is good for 780 horsepower on E85. Justin and Nick soon hope to turn up the boost and go for 950 horsepower at the wheels.

He owned that first Fox well into college, but in order to extend his education, he had to make the hard choice to sell it. Once he talked Amber McPartlin into changing her last name to Meyer, and making a solid paycheck he jumped back into the game. One build that caught his eye was Mustang360/Mustang Monthly Technical Editor Mark Houlahan’s Factory Five Racing (FFR) MK4 Roadster. That type of build uses Fox Mustang underpinnings, so it can be a nice budget-minded build. “I fell in love with the story,” Nick says. Going off the success of talking Amber into things, he tried again, successfully making a Factory Five Racing build look like a great idea. Knowing he was in unchartered waters, he contacted Mark to help with build advice. “I built the car and had it painted just like Mark’s,” Nick added. “I just loved his car.”

After becoming Mark’s best friend driving his own Roadster and building an old Bronco Nick wanted a Fox Mustang. This time, though, he wanted the Fox Mustang he couldn’t afford when he was younger; a 1993 Cobra. “I had read about the Coyote swaps and really had an interest in building one,” Nick says.

To help fund a 1993 Cobra Coyote swap build, Nick sold the MK4 Roadster. Nick assumed he would have to build a Cobra clone, thinking there wouldn’t be any available to suit his needs. However, a quick online search turned up a 1993 Cobra roller for sale. The bad thing is the ad was a year old. No matter, Nick messaged the car’s owner Danny Hardt anyway just in case he still had the car. “I woke up the next day to an email that he did still have the car and was toying with selling it or building it,” Nick says. With the Cobra roller only two hours from his home, he went to look at the car with trailer in tow.

Just like the rest of the car, Nick took measures to make the interior look stock. With the car having so few miles on it, the interior was in great shape. Other than the car’s Dakota Digital dash featuring a GPS speedo and boost readout, you would be hard-pressed to think the car made serious steam. However, if someone knows what a Ford Performance Electronic Throttle Control accelerator pedal looks like, the car’s cover is blown.

With the Cobra in front of him, he thought the car was extremely clean, but Danny wanted to know Nick’s plan for the car. “I told him the truth, that I would Coyote swap it since it was missing its original drivetrain,” Nick says. Danny liked Nick’s Coyote swap idea, and agreed to sell the Cobra.

Once he had the Cobra back home, Nick started mocking up the drivetrain, the turbo, and smoothing the engine bay. Even though the Cobra was extremely clean, Nick wouldn’t be truly happy if he didn’t have the car repainted. “By that time the budget was already blown away,” Nick says. Therefore, after he was introduced to Midwest Fox Rods’ Jon Wise, it was all over but the cryin’ at that point. “Jon was all in on the project from day one,” Nick explained.

When doing a Coyote swap, there are components you’re going to need to make it happen. For his Cobra, Nick chose a Team Z Motorsports tubular K-member, Strange Engineering 10-way adjustable struts, a 2003 Cobra hydroboost system and steering rack, a 1996-2004 Mustang power steering pump and A/C compressor, and a Power by the Hour Coyote swap bracket kit. The K-member is dropped an inch so Nick can use the stock hood, and as such with a Coyote swap, the A/C lines are all custom, as is the condenser. Scratching for traction out back is a Team Z Motorsports Street Beast kit with adjustable upper and lower control arms. The stock 8.8 has a 2003 Cobra differential with Moser 31-spline axles, Strange Engineering 10-way adjustable shocks and 3.27 gears. Maximum Motorsports subframe connectors provide chassis stiffness, while the rear quarters are rolled to make room for the Nitto NT555R 315/35s.

Getting back to work, Nick finished mocking up everything, then tore it all back apart to take it to Jon for paint. The whole car was treated to miles-deep Southern Polyurethanes black. “Everything on the car is Southern Polyurethanes from the primer to the clear,” Jon says. With the hard work done on the body, Nick took the car home to reinstall the drivetrain. Once the car was running, the Cobra went back to Midwest Fox Rods for final assembly. “We finished the car with just a few weeks to spare prior to Mustang Week.

Technically, when we shot it last summer prior to Mustang Week, the car wasn’t “done,” but even these days, the car is not done. It still receives regular attention, ranging from detailing to wheel swaps to fine-tuning the combination. Nick’s goal with the Cobra was simply to “build the absolute best Coyote swapped 1993 Cobra I could in my garage,” he says. He wanted it to look stock until the subtle details present themselves. He wanted all creature comforts like A/C, power steering, power brakes, and the like. He wanted stock looking wheels with 315s out back, including the tailpipes. “Significant work went into the car to accomplish these goals,” Nick says.

Simply put, he covered all the details, touched every bag rounding the bases, except for one. Have you found it, yet?

Nick would like to thank all the Mustang fans on social media, Jon Wise, Fonzie Novelo, and Justin Jordan. “Fonzie was always around to answer my turbo questions, and Justin spent many late nights helping to dial in the tune remotely,” Nick says. “The car runs and drives like stock till you kick it,” he adds. “Most importantly, my wife who lets me spend countless hours and money to build cool stuff in the garage,” Nick says. Nick dedicates the Cobra’s build to his friend Wilson Adams IV, who passed away due to cancer prior to the 2017 Mustang Week. “He left me his 99 GT and told me to build something cool. I hope to turn out another project in a few years with his car.” 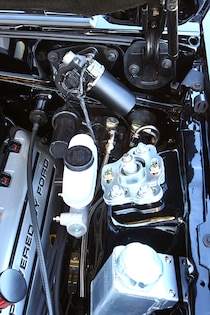