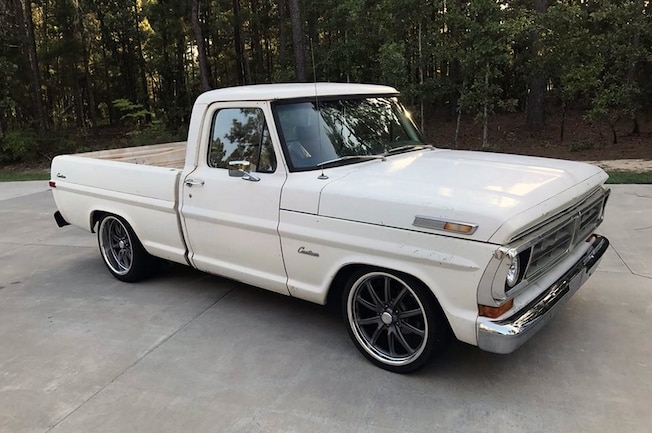 This author, along with many more Mustang and performance enthusiasts, have fallen in love with early Ford trucks. Though some favor the very early F-1’s and 1950’s versions, most have fallen for the Third-, Fourth-, and Fifth-generation F100s. It’s quite the year range, but it seems many Mustang enthusiasts like 1957-1972 trucks because many of our dads had these years. We know of several Mustang enthusiasts building these trucks as homage to days gone by, and if you want to get in on the action, you better hurry…prices are going up on a daily basis. However, deals can still be had, especially if you like the weathered patina look.

One such Mustang enthusiast getting in on the fun is Mustang Week’s Rodney Melton. Rodney started the Mustang enthusiast’s version of Mecca in 2001, and he’s always had Mustangs. That is, until this 1971 Ford F100 entered his life. When asked why he bought the truck, Rodney says, “I really just wanted something different.”

Gateway Classic Mustang’s specialty is upgrading the suspensions of early and late model Mustangs, Mavericks, Cougars, Fairlanes, and the like. However, because of that experience, and the fact that Gateway already has a sweet F100 in its stable, so tackling Rodney’s ride was no problem. That is a Crown Vic front suspension with a Boss 302 engine on it. When it’s all said and done, the engine will boast a JLT Performance cold air intake, the Roadrunner will be fed via a Holley fuel system, and inside will feature a few parts from National Parts Depot.
Out back is Gateway Performance Suspension’s 3-link kit, and the rear end will be finished off with Baer brakes to bring all the fun to a halt.

Rodney bought the F100 out of Arizona with a 351 Cleveland and a T5 transmission. It ran okay, but Rodney wanted to update the truck’s suspension, so he sent it to Gateway Classic Mustang. At the time he sent the truck to Gateway, he didn’t plan on an engine swap, but the guys from Gateway suggested the time do a Coyote swap was now. Since the plan was to remove the Cleveland, anyway, Rodney agreed and a Coyote swap was set in motion.

Technically, since Rodney found a 2013 Boss 302 engine it’s a Roadrunner swap, and he also sourced a Mach 1 5-speed transmission from MPS Auto Salvage. To make for an easier swap, Gateway is adding a Crown Vic front end with a Gateway Performance Suspension C/V coil over conversion kit and Coyote engine mount kit, as well as its 1967-’72 F100 short wheelbase 3-link kit out back. Rodney says the truck might start and run this week, and plans call for the truck to be at Mustang Week 2018. Hey Rodney, Houlahan can have the golf cart if I can drive the F100. Whatya say?