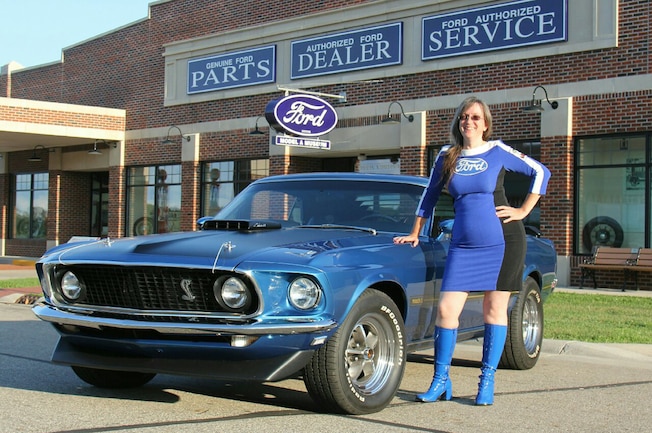 Brighten up your week by starting it off with Mustang Girl Monday, brought to you by Team Mustang Girls. This week we are happy to introduce Shelley Streeter and her 1969 Mach 1 428 Cobra Jet.

Shelley's passion for Mustangs began around the same time as another love in her life. She tells us, "When I first met my husband back in 1982 he was driving a 1970 Mach 1 that he built in his high school auto body class." With fond memories of cruising around in the '70, they decided it was time to add another Mustang to the family. "We decided about nine years ago that it was time to get another Mustang. We searched the internet, classified ads and the Wheeler Dealers publication. We finally located a car through a series of phone calls and referrals and ended up finding a car less than two miles from our house in somebody's garage. It was a 1969 Mach 1 with a 428 Cobra Jet engine, numbers matching....just the car we were looking for. It was quite a mess and needed extensive restoration. We spent endless hours searching for parts at swap meets and online. But it was worth the effort. The Acapulco blue beauty is restored to factory specs including factory air conditioning and smog pump. It is a blast to drive. She turns heads everywhere she goes and people are frequently surprised to see a girl driving a car like her."

If you happen to be in the Michigan area, the car will be on display at Gilmore Car Museum in Hickory Corners, Michigan at the end of April 2018 for a special muscle car exhibit.