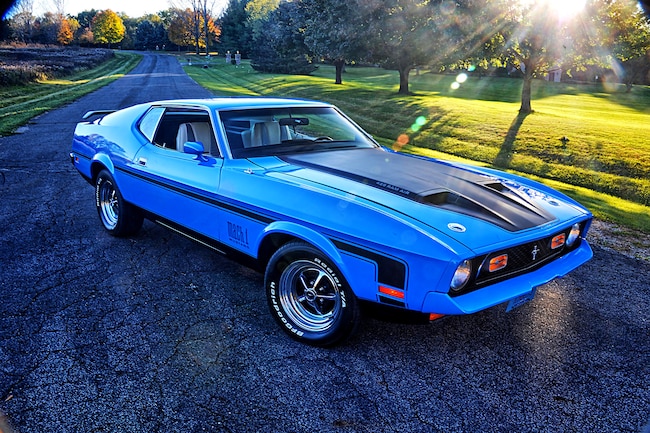 In the classic-Mustang era that ran from April 1964, when the first Mustang was sold, to the Fall of 1973 when the downsized Mustang II was introduced (and followed two months later by the first OPEC Oil Embargo), the 1971 to 1973 models were something of a stepchild. When introduced for the 1971 model year, they were seen as all new and, visually, so much larger than their 1969-1970 counterparts. The 1969-1970 models seemed almost compact in comparison.

So now that we have debunked the misconception that somehow the 1971-1973 models were so much larger than their 1969-1970 predecessors, why are they seen by many, even knowledgeable early Mustang enthusiasts, to be so? Maybe it’s the styling, a clear departure from the tightly coupled greenhouse of the 1969-1970 models combined with the long, flat hood and the roof line, especially on the SportsRoof models.

Another misconception held by many early Mustang fans is that Larry Shinoda, who came to Ford with Bunkie Knudsen in 1968 when Knudsen become President of Ford, had a significant hand in the design of the 1971 Mustang, but that wasn’t the case. By the time of Knudsen’s arrival at Ford on February 6, plans for the 1971 Mustang were well underway, and the 1971 model would be significantly wider so as to avoid the problems of installing Ford’s 429cid Cobra Jet V-8. This to avoid the issues encountered with the installation of the 429 SOHC V-8 in the 1969-1970 Boss 429.

In a conversation many years earlier, Mustang design executive Gale Halderman noted the actual chronology. In early 1968, the design process for the 1969 model was wrapping up for its introduction in the fall of 1968. At this point, everyone involved in the design of the next-generation Mustang already knew that the 1971 model was going to be larger and a fastback model would be part of the model mix.

This fastback version had acquired a sharp beltline kickup behind the doors and was designed with an almost flat roofline with a near-horizontal rear window that would become the model’s signature design element. When Knudsen came to power a few weeks later, he took one look at the fiberglass model that Halderman’s team designed and looked no more.

Gale Halderman recalls Knudsen’s review. “He approved that ’71 right in the studio. We asked if he didn’t want to take it outside…and he said, ‘No, I like it right here.’ We said, ‘Well, there are a couple more being done, wouldn’t you prefer to wait and see how they turn out?’ He said, ‘No, I like this one.’ We had never had approvals like that before.”

History lesson is over. Let’s get right to the car being profiled here: Scott Skalitzky’s 1971 Mustang Mach 1 SportsRoof. Skalitzky, who hails from Sun Prairie, Wisconsin, has owned a number of significant Fords over the years, including his first car, a 1973 Mustang Mach 1 purchased while in high school that he still owns. Other noteworthy cars currently in his collection include a 1969 Boss 429, a 1971 429 Super Cobra Jet, a 1971 Mach 1, and a 1971 Boss 351, along with a few others. He’s currently the owner of Custom RV Services in DeForest, Wisconsin. He credits his dad, Ernest Skalitzky, for inspiring his automotive passions and instilling in him a sense of pride and accomplishment that comes with repairing cars. After attending college for auto collision he married his wife, Jenelle Skalitzky, who shares his passion, along with son Skyler and daughter Ashley. Scott recently was certified as a Mustang Club of America judge.

We asked Scott what motivated the purchase of this particular car and he said, “I had always wanted to restore a big-block Mustang after having owned and restored many Mustangs. I found the car in Waterloo, Iowa, listed in Hemming Motor News. I convinced my wife to go to Waterloo, Iowa, for our second wedding anniversary and then told her we were going to look at a car I wanted to buy. After looking at the car we were supposed to stay at a really nice hotel in Waterloo. But there were no really nice hotels in Waterloo, or even Dubuque at that time. Needless to say, she was not very happy. So we had to drive back to Wisconsin, where we found a nice hotel and my wife demanded the President’s Suite.”

“The car was purchased in 1989 and shortly after buying the car and disassembling it my son Skyler was born. My focus turned to providing for my family, I put the car up on a pallet shelf in my shop and it sat there for 26 years—just a shell, block-sanded and in primer waiting for reassembly. I went to swap meets and made connections with other people restoring Mustangs, collected all the right parts, and did a few other restorations before deciding it was time to finish the car.”

From the car’s Marti Report we know a bit about its history before Scott literally put it on the shelf. This Grabber Blue Mach 1 was built in Dearborn on May 7, 1971, and sold to Burk Ford Sales in Perry, Iowa. It was sold to its first owner just a month later on June 10, 1971.

The 429CJ engine was rebuilt to the correct 429CJ specifications and the C6 automatic transmission was rebuilt to stock specifications with a steel tailshaft. The rest of the drivetrain includes the 3.25:1 rear gear set installed in a Traction-Lok 9-inch nodular rear end case with 31-spline axles. John Byington at Custom RV Services helped with the body and paintwork. Jim’s Upholstery did the interior. But the rest of the work was performed by Skalitzky.

“I try to drive the car at least once a month,” said Skalitzky. “But only in the summer when the weather is just right. The car is just plain fun to drive—the car wants to go fast. Its color and age draws a lot of attention and seeing people smile and give thumbs up as it passes by is gratifying. Certainly, the car in Grabber Blue with the white interior is attention-getting. Anytime there is a local car show and the weather is good, I love getting out and driving it. I am a former President of the Badgerland Mustang Club so I have a wide circle of like-minded friends.

"The one thing I’d like to say to the readers of Mustang Monthly is that it’s okay to take some time off,” says Skalitzky. “But never give up on a project car. Mine took three decades to get it finished.”

And we’d say that it was well worth the effort.