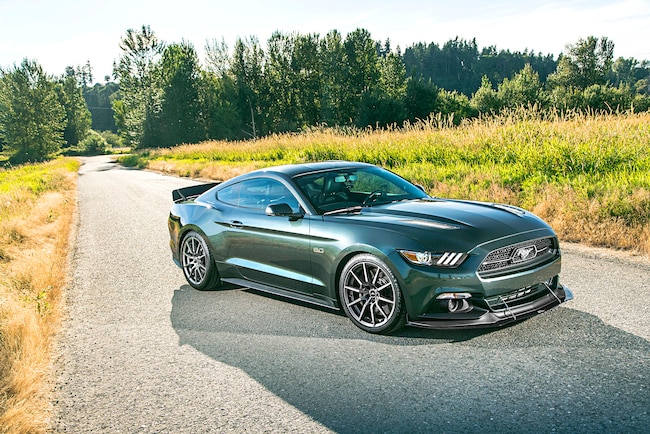 How much is too much? Make no mistake: We’re in a golden age of performance. The computers that we once feared would lock us out of our own cars’ tuning potential will let a modern commuter car stomp—or at least keep up with—all but the rowdiest muscle car from the last golden age of performance. Right now, life is good. And the redesigned Mustang, well it’s really good. The list of features Ford rolled out in 2015 was enough to set the Ponycar world on its figurative ear. For the fourth year running the GT got the Coyote, and you could get it with a performance package that included Brembo binders as big as most aftermarket kits, and every model starting that year got a rear suspension design that eluded everything but the top-shelf Cobra a few years back. In 2015 the Mustang got really great looking, at least according to Michael Swift. “I liked that it had that European/American flavor,” he opines. The perfect storm of presence and performance made him do something he hadn’t done in a decade: buy a new one. It took a while to find one with the options he wanted; Guard Metallic, 50 Years Edition, Performance Pack, Shaker audio package, etc. So when one turned up on Black Friday, 2014, Michael didn’t hesitate.

Life was grand. For those who don’t know, the stock Performance Pack cars like Michael’s can do the sixty in about 4 ½ seconds and burn off a 13-flat in the quarter. That’s fast, especially fast for a 3,800-pound production car. But as the months wore on, Michael came to an almost embarrassing conclusion; as good as those figures are, they’re within the realm of a well-tuned import anymore. So as the new-car smell began to fade, he started evaluating his options. He consulted TMS Performance just south of Seattle, Washington. The prescription: go blown or go home.

Well that’s probably not how Al Valencia put it but we’re not going to let facts get in the way of a good story. The takeaway here is that Al and Michael drafted plans to extract the most pump-friendly power without impinging on the car’s drive manners (it’s Michael’s daily after all and Seattle traffic rival’s traffic in any major city). And cornerstone to those plans was boost. Lots and lots of boost.

Instead of building upon a foundation designed to handle OEM output, TMS hedged its bet by commissioning a Modular Motorsports Racing 1000 bottom-end. The company bases it on a new factory block and Boss 302 crank, but swaps the rods and pistons for Manley H-beams and forged slugs. Al’s crew built up the top-end with a set of JPC heads. As part of their transformation, the Stage III assemblies get CNC-machined ports (208cc intake; 88cc exhaust), 1.5- and 1.262-inch Ferrea valves, and PAC Racing springs. All said and done, the heads flow 342cfm intake and 249 exhaust at .650-lift, as much as 14 and 22 percent more than stock, respectively.

A Stage II Procharger D-1SC supercharger with a Big Red bypass valve and Injector Dynamics ID1000 injectors feed the engine. To keep up with the engine’s greater breathing potential, TMS recommended an Edelbrock Victor II manifold. Because it’s taller than stock, the manifold required a custom intake pipe (which TMS made).

The Stage II Procharger D-1SC and the Edelbrock Victor II manifold let the cat out of the bag, but you’d have to have X-ray vision to see the porting, Ferrea valves, and the Manley H-beams. Anchor Room made the custom data plates with the car’s pertinents.
A set of Baer Eradispeed Plus rotors give Michael more whoa to balance the go. He chose 19-inch MRR Design M350 wheels to show them off. A set of RideTech Level 2 adjustable coilovers give the car more poise at greater speeds.

The output side got the similar high-flow treatment. It features a pair of Kooks 1 7/8-inch headers. Those feed a 3-inch MBRP exhaust with race-series mufflers. The combination of mods translates to some pretty heady performance; at only eight pounds of boost it makes at least 400 lb-ft torque between 3,200rpm and 8,000rpm, peaking with 492 lb-ft at 5,200. Power wise, it peaks at 671hp at 7,500 rpm. And yes, those figures were derived on pump gas at the wheels. And again, only eight pounds of boost. There’s lots more potential, even on pump gas. But stock half-shafts kind of prevent him from going there for the time being. Future plans call for cams to take advantage of the heads. And of course, more boost!

To keep the nose planted, Michael chose a carbon fiber APR splitter. A set of Scott Drake grilles grace the hood vents, and for a little bit of whimsy Michael swapped the pony emblem for one of Ford’s lighted ones.
Even an aerodynamic vehicle achieves lift at speed, so to keep the rear planted Michael chose a Dusold Design rear spoiler. The black MBRP tips hint at the company’s 3-inch pipes and race-series mufflers.

“Not only did I want to go fast in a straight line, but I wanted to go fast and corner extremely well,” Michael observed. The Performance Pack comes with strut braces and anti-roll bars that rival those in the aftermarket, so he left those alone. But he swapped the coils and dampers for a RideTech Level 2 adjustable coilover setup.

It took a while to find a car in Guard Metallic with the 50th Anniversary package interior in Raven Black but one turned up on Black Friday, 2014. This one even has the Shaker audio package. Other than the radar detector (for obvious reasons), it remains stock.

Michael smartly figured an increase in the ability to scrub off speed should accompany the ability to acquire it. The Performance Pack cars come with Brembo calipers and respectably sized 15- and 13-inch rotors, but Michael stepped up to two-piece Baer Eradispeed-Plus rotors. A set of 19x10 and 19x11 flow-formed MRR Design M350 wheels showcase the brake upgrade and offer a plus-one diameter benefit. They wear 275/35ZR19 and 325/30ZR19 Continental DWs.

In its stock form, the 2015 Mustang GT is a marvel of engineering, performance, and dare we say cost. Yeah it nudges the outer limits of Ponycar affordability but it’s so good that some call updates unnecessary. And from a mass-market point of view they’re probably right. But then again, have those people felt what nearly 700 horsepower feels like on the street? Because if they did, they’d agree: Too much is often just right. Warranty be damned! 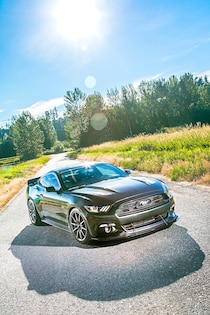