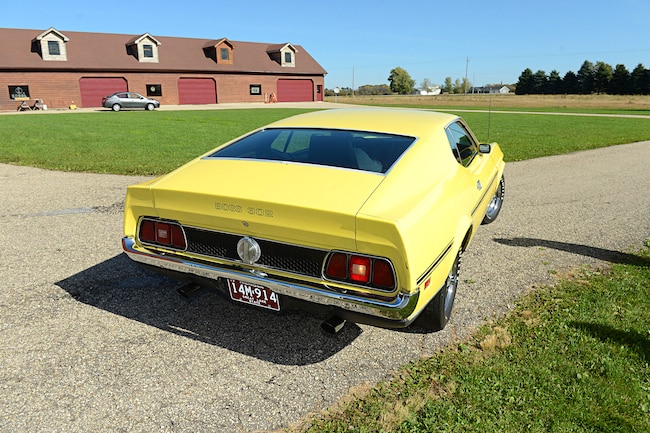 Most prototypes never make their way into private hands. This one did. “It’s odd to me that [Ford] would bother to go through all that kind of work and not just crush the car,” Kevin Marti told us. Ford Motor Company licenses Marti Auto Works with their entire production database of North American–built vehicles from 1967-2007. Marti documented the ’71 Mustang as a factory Boss 302 prototype that Andrew Hack bought off eBay in 2004, which he sold this past fall to Bob Perkins, the famous Boss Mustang collector and restorer in Juneau, Wisconsin.

With the car in Perkins’ shop, we had a chance to see details. Andrew Hack lived less than an hour away and drove to Bob’s shop to share his information. Hack told us that on the weekend of Thanksgiving 2004 he had been looking for a 1971 SportsRoof as a driver. The Boss 302 in-stripe logo was not on the body, but Hack, who graduated high school in 1971, was very familiar with the factory photos Ford released in 1970 of the coming ’71 Boss 302.

For decades, enthusiasts have argued whether Ford built and released a 1971 Boss 302.

“I looked at the photos and called over my wife, Kathy, and said, ‘You won’t believe it, but this car looks like that prototype back in 1971; the Boss 302 that they never built.’” Hack figured somebody had painted the car to look similar, but the early serial number of 100053 was tantalizing. The Mustang had a four-speed, but the original engine was a two-barrel 351-2V.

When Hack got the car home he was amazed to find two patent plates (door tags), one on top of the other. The top tag’s VIN was 1F02H100053 and the bottom tag’s VIN read 1F02G100053. The fifth digit is the engine code. H decodes as a 351-2V, and G is the code for the illustrious Boss 302. Incredibly, this Mustang had been on the road since sold in 1971 at Wilson Ford in Huntington Beach, California, and nobody had investigated or apparently even noticed this oddity. Hack did, and he immediately sent off for a Marti Report. At first, Marti found no information. Next, Hack wrote Ford for a 999 report, which confirmed the VIN with the H engine code, but with no reference to a Boss 302 history. A year later Marti’s company found extensive documentation—including six invoices (reflecting changes made) and Ford telegrams on this car—and called Hack with the good news of the Mustang’s Boss 302 prototype heritage.

They released and sent this 1971 Boss 302 in August of 1970 to the Las Vegas Convention Center for a big car show.

We phoned Kevin and he told us, “This car appears to be a prototype and a lot of money was invested in tooling and parts. But, the program was abruptly canceled and, amazingly, this car was converted and sold to a retail customer.”

Bob Perkins lives about an hour away from Hack’s home in Janesville. Donald Farr, former editor of Mustang Monthly, had stopped by Perkins’ shop on his way to do a feature on this car in 2007. Andy came to one of Bob’s open house events and they talked about the prototype Boss 302. Then, last summer Bob found out through friend Scott Skalitzky that Andy Hack might be selling the prototype Boss. Finally, Bob drove to Janesville to see the car in person.

Hack is an enthusiast and historian. He liked the fact that Bob already had those ’71 Boss 302 parts in his inventory and would put the car back to the way Ford originally built it with a Boss 302. “Ford must have spent millions of dollars on the production of service parts,” Perkins said.

In an attic in Bob’s restoration shop, we walked past seven 1971 H-pipes, which he found at Ford dealerships decades ago—same for new ram air setups, stripe kits (argent and black), right-side exhaust manifolds (made to clear 1971 steering boxes), mufflers, and even chrome exhaust tips, a real curiosity because every Boss Mustang, 302 or 429, came with turn-downs on the exhausts. In his showroom, Perkins showed us a Boss 302 engine on a stand with an aluminum intake for a 1971 Boss 302 cast D1ZE-9424-EA.

These heads will fit a 1970 Boss 302, but the port sizes are a little different. Likewise, 1971 Boss 302 heads are “a little different for emissions,” Perkins said. All those years collecting 1971 Boss 302 parts has finally paid off for Bob Perkins. He now has the one 1971 Boss 302 in existence. Recently, Bob acquired a N.O.S. assembly line–crated Boss 302 engine through a Ford engineer acquaintance.

Bob discovered this ’71 Boss 302 prototype even had a 3.50:1 Traction-Lok rear end with WFD axle code, also unique to the ’71 Mustang Boss 302. Ford had to have a whole line of unique parts for their new 1971 Boss 302 in the system before the car hit dealers. Then, when they canceled the program the parts were in the system but the car did not make production.

Meanwhile, this car, built on August 3, 1970, the first day of 1971 model year production, was assembled with its Boss 302 engine and full Boss equipment, then shipped to the Las Vegas Convention Center for a new car show.

Ford used this car in California for the photo ads of a new Boss 302 that Hack remembered from his high school days, class of 1971. And here he was, the lucky one uncovering the car. He could eyeball “Boss 351” on the rear of the trunk and make out where “02 [a decal] had been removed and 51 hand-painted on.” Incredible.

Perkins had five exhaust systems for the 1971 Boss 302, a car Ford did not put into production, but for which he now has the one car that got into private hands.
The engine in the 1971 Mustang is a 351-2V, which the second owner modified with a four-barrel. However, he saved the original cast-iron two-barrel intake and two-barrel carburetor, which went with the sale to Andrew Hack.
There are so many details that distinguish a 1971 Boss 302 from a non-Boss 302, such as a rev limiter. The factory drilled these three holes to mount a rev limiter.
Andrew and Bob believe this 1971 Boss 302 came with ram air, and thus the hood springs would be the stiffer springs that feature a flat top, as seen here. The car was later changed by Ford to a flat hood, which does not require these heavier-duty springs.
Andrew Hack will forever be tied to the discovery of this historic 1971 Boss 302.
The factory leaded-in the seams of the door sills, something they did with show cars.
Bob Perkins applied a "Boss 302" decal to the rear deck lid, as the car came with originally. Andrew Hack (right) and friend Paul Williams can sometimes make out the faint outline of “51” that Ford hand painted after they changed the Boss 302 to a Boss 351 sometime after the car was shipped to the car show in Las Vegas in 1970.
Bob Perkins acquired a collection of 1971 Boss 302 parts buying obsolete inventories from Ford dealers in the 1980s. He is very deserving of the car, a sentiment shared by Andy Hack.