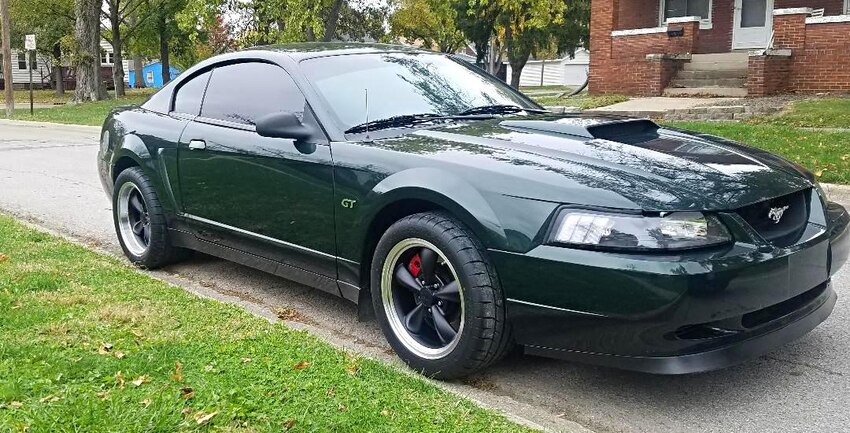 Brandon Heuter of Highland, Illinois, owns this 2001 Bullitt Mustang in Dark Highland Green (No. 420). He’s no stranger to the Blue Oval. This is his fifth Mustang, having previously owned a 1994 SVT Cobra, a 1989 LX ’vert, a 1993 LX, and a 2001 GT. Heuter’s first love was the 1994 SVT Cobra, which he regrettably sold after being laid off, and he’s not sure which car he loves more now: the Cobra or the Bullitt. A few months ago his father passed away, and Heuter purchased the Bullitt shortly thereafter. His father rode in all his cars except this one, and Brandon knows that he would have loved it. With two boys of his own who love his Mustang and enjoy going to the track, Heuter plans on enjoying the Bullitt for years to come and plans to pass it down to them someday. For now, he has installed a JLT cold air kit, Eibach Pro Kit springs, a Ford Performance aluminum driveshaft, BBK long tubes and off-road X-pipe, SLP resonators, and blacked out taillights and headlights. The wheels are 17-inch Bullitts on Mickey Thompson street tires. Slicks and a short throw shifter coming soon!