James Meagher drives Rick Hernandez’s NHRA-legal Cobra Jet to 208-plus MPH, resetting their own record, in the shadow of the Space Shuttle 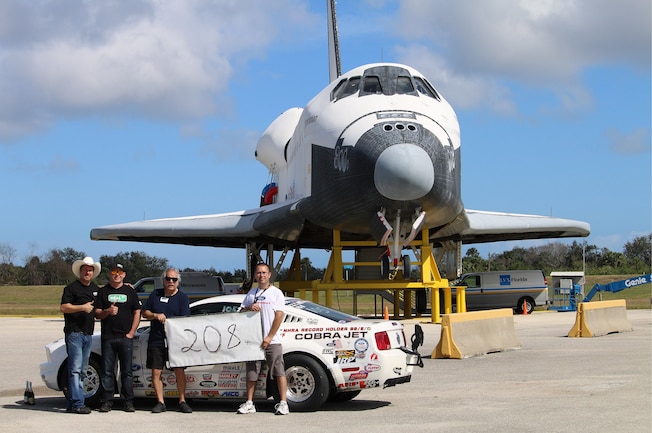 The coolest thing is that the car, in almost exactly the same trim, has set four NHRA records during competition. About the difference in setup, Johnson said, “The only changes to run the mile were the addition of a larger intercooler tank, the removal of the forward facing hood-scoop, and the addition of a Snow Performance water/methanol system to keep things cool. It was not our intention to make this vehicle illegal for NHRA class racing. We just wanted to go out and have some fun and see how fast it would go in NHRA-legal trim.”

Meagher reports that the car was tricky getting up to speed with the NASCAR tires but then hooked and booked.

The extra 12 mph from the previous record came from freshening the tired engine (by Chuck Trotter in Jacksonville, FL), SCT Performance tuning on a chassis dyno, and some “tweaking” of the camshaft timing. Technically, it’s still NHRA-legal—except for the water/meth kit—and uses a legal 2.3-liter TVS supercharger with the stock pulley. Car weight was 3,600 pounds and the engine was making 830hp.

NHRA-legal record cars have to meet stock Ford spec and are torn down after a record run to verify. This engine uses a little TVS stock Shelby 2.3L blower with a "stock” pulley. The only changes to run the mile was the addition of a larger intercooler tank, the removal of the forward facing hood-scoop, and the addition of the non-NHRA-legal water/methanol to keep things cool.

The tires were also swapped from drag race-sticky to high-speed-competent NASCAR stock car Goodyears, which Meagher commented made it a little tougher to get up to speed. He also relayed that because the engine has an electric water pump (and a mile will get the engine a lot hotter than 1,320 feet), he kept an eye on the temp gauge, the wideband air/fuel ratio gauge, and the centerline of the track repeatedly until it was time to pull the ‘chute. The re-work since the last time out also allowed more rpm which contributed to more speed, obviously.

This latest pass is only the fourth standing mile run that the car has made, but the team is upgrading to Super Cobra Jet specs with a bigger blower and a goal of 230 mph. That’s cookin’!