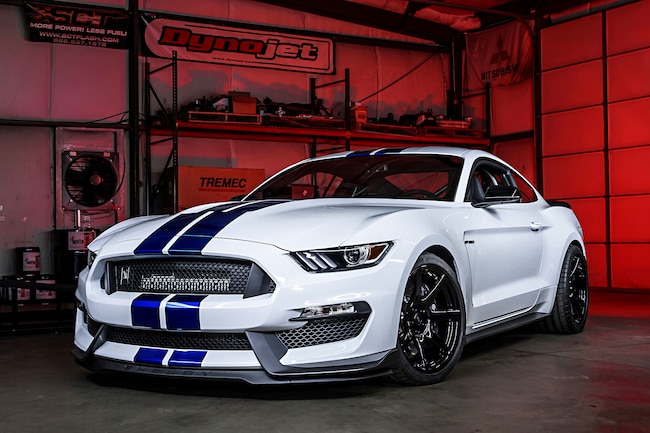 How do you take a stellar piece of engineering and make it better? Add turbos. The team at Fathouse Fabrication built a Mustang GT350 to decimate all, with hidden twin-turbos and a whopping 1,143 hp out of an internally bone-stock Voodoo engine.

Back up 6 years and you would find Ben Stoner and two friends griping about their day jobs, “we always talked about starting a shop together,” said Ben. Finally that conversation became serious and the three opened up shop in Martinsville, Indiana. Fathouse Fabrication specializes in forced induction and high quality fabricated race car parts for late-model American V8s. Now, they’ve built a pair of GT350s with over 1,000 hp.

Why mess with a good thing? From the outside the GT350 appears stock, minus Ford Performance lowering springs and the six-point roll bar you can spot through the windows.

“The GT350 handles great from the factory, but lacks the power to make it fun to drive on the street. The sound that car makes with twin-turbos and open exhaust is magical,” said Ben.

Ben and team had built a GT350 before this one, producing at the time, the most horsepower out of a stock Voodoo engine, at 1,056 hp, for customer Tony Janko. Shortly after, Tom Barth picked up a 2017 from his neighbor, a Ford dealer. He visited local performance shops and looked for weeks before stumbling across Tony’s car on a forum. He contacted Tony to discuss the quality of the build, “to hear praises from a car owner who has no invested interest in the company, went a long way,” said Tom. Several back and forth emails between Ben and Tom created a shopping list; a couple weeks later the GT350 arrived at Ben’s door.

All of the factory amenities like Traction Control are still there, it’s just that “it doesn’t work that great when you make this much power,” said Ben. The team has been in talks with MoTech about making a software package to handle 1,000-plus hp.

“He had a pretty specific list of what he wanted, and he asked for suggestions,” said Ben. Occasionally Tom would find a new addition such as a carbon fiber driveshaft and a roll bar, as things became available for the new GT350. At this point, Tom set out to beat Tony’s former record.

The oil pump gear and crank sprocket were replaced with billet bits from Triangle Speed Shop. Other than that, this Voodoo engine is bone stock internally, including the original camshafts.

Open the hood and you’ll find what appears to be a mostly stock GT350 with some trick custom bits, but crawl underneath and you’ll find the car’s real magic. The twin 66mm Garrett GTX3582R Gen II turbos are packaged tightly beside the stock transmission, where the stock headers would normally end. They’re plumbed back up front through a 4.5-inch thick intercooler built in house. For Fathouse this is a common placement, “there’s no reason not to put them there,” said Ben. At max power the turbos produce 14.5 psi of boost.

“There’s so much going on in the engine bay to begin with, you’d have to modify the radiator and such,” said Ben about the turbo placement. “The turbo kit responds faster, there’s less weight and the weight that’s there is low and towards the center of the car, plus the heat is pushed down and out, instead of into the engine bay.” The turbos dump into custom-built, 3-inch stainless open pipes with no mufflers or converters. The team also built an emission compliant system for the street that will stay with the car.

The fueling system was upgraded, but again, not as much as you may have guessed. Inside stock fuel rails use Injector Dynamics ID 1300 Fuel Injectors. A JMS Chip fuel pump booster assists the stock fuel pump. The factory fuel pump flows a lot of fuel, according to Ben.

The twin-turbos are 66mm Garrett, good for upwards of 850 hp each. The plumbing and all fab work was done in house at Fathouse Fabrication. The stock transmission features a McLeod RXT 1200 clutch and MGW shifter.

The stock computer was tuned by Fathouse’s in-house Dyno-tuner Corbin Johnson. “That’s the nice thing about turbo charging, we set it up to max power and PSI, and then you can turn it down,” said Ben. The tune was performed through a HP Tuners nGauge, producing 14.5 pounds of boost on E85 fuel. The boost controller has three presets, which are performed by a simple turn of the Go Fast Bits boost controller. Preset 1 allows for low boost, 7 pounds, and can run on 93 octane pump gas, making around 750 hp. Tune 2 and 3 require E85 or race fuel, producing 900 horsepower and up to the max. Here Tom can turn it up pound by pound and the computer will do the rest, it’ll recognize the new fuel and compensate timing and fueling accordingly. “For tuning the car for power the factory Ford ECU works really well,” said Ben.

Suspension was upgraded with a select combination of products assembled by BMR Suspension, that according to Ben, is a street car package designed to eliminate wheel hop without adding a lot of noise vibration and harshness (NVH). The kit includes vertical links, performance bearings, tubular lower control arms all around, and a cradle bushing lockout kit. Ford Performance toe-link bearing assemblies and lowering springs were used, but the factory magnetic ride struts and stocks are still utilized. The brakes have remained unchanged as well.

Inside, the car is mostly stock as well, minus some safety bits like a six-point Watson Racing roll bar and Impact Racing harnesses.

A theme throughout the build as been quality, showcasing the premium bits of the original GT350, while only adding parts to enhance the car, “It’s really just a well put together set up that’s tuned right, installed right and does well. We have the recipe nailed down now,” said Ben about the quality. Tom and Ben only met after the car was completed and loaded onto a trailer.

“It’ll be an all-around type thing. It won’t dominate on the strip, but it’ll be a good runner. For road course racing, it’s made for that, we didn’t change much. Although, we probably won’t run 1,100 hp, more like 750-800hp, now that sounds fun to me,” said Tom. But while he’s off playing in his new toy, Tony is making plans of his own.

“I think Tony would like to have the record back,” said Ben. “but it won’t be a stock engine.” 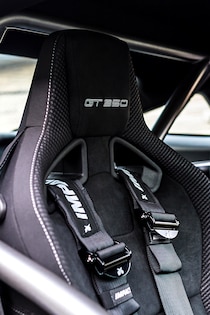