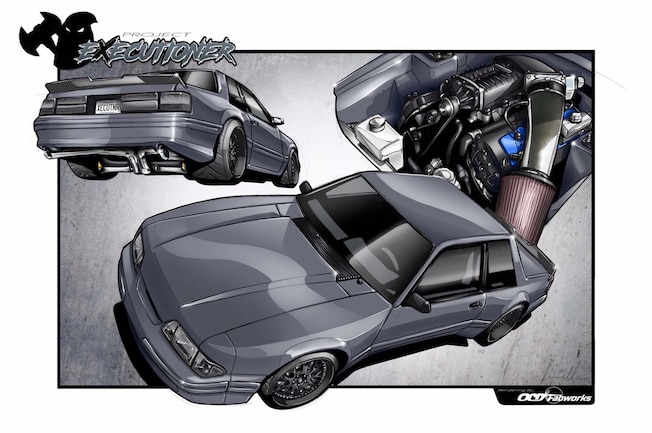 Coyote swaps are commonplace these days. It seems every other Fox Mustang we come across has a Coyote in it. When comparing the cost of building a wicked small-block compared to doing a Coyote swap, the costs are very close, and for the performance and fuel economy afforded by a 2011-2014 GT Coyote engine, the reasons to do the swap is ever-present.

Lance Heckathorn is putting a twist on the Coyote swap with his Project Executioner 1990 Mustang LX coupe. He’s building an open track-themed ride, even though it will see plenty of street duty. Lance is two years into the build, and here are the details.

The engine compartment has already painted in Focus RS Stealth grey, but Lance has to find a new painter to finish off the exterior. The car stripped and sandblasted prior to the rebuild, and it will feature Maier Racing flared fenders and quarter panels. In the rendering you can see a Roush supercharger with a JLT Performance air intake, but Lance says the engine will begin naturally aspirated. In either form, the Roadrunner will digest fuel from an Aeromotive fuel system.

The engine is a 2013 Boss 302, which…yeah, we know is technically a Roadrunner, but still a Coyote derivative. The Roadrunner engine will be paired with a Tremec T56 transmission, but for its open-track persona the car will wear Maier Racing flared fenders and quarter panels, and a 2004 Cobra independent rear suspension (IRS). The IRS will boast all the Full Tilt Boogie Racing goodies, Bilstein coilovers, GForce Performance Engineering 1000 horsepower axles, a Torsen T2R differential, and Full Tilt Boogie Racing 13-inch rotors with 2003-2004 Cobra calipers.

Up front, Lance will be using a Maximum Motorsports tubular K-member and front suspension with Bilstein coilovers, SN95 spindles, a 2004 Cobra rack and hydroboost, and Baer brakes with 6-piston calipers and 14-inch rotors. The car will also feature a Maximum Motorsports roll cage and subframe connectors, along with reinforced torque boxes. The car’s Cobra theme continues with Lance using a 2004 Cobra pedal assembly.

Being two years into the father/son build, Lance hopes to finish up the car soon, and when he does, we’ll be sure to bring you an update.

To go along with the car’s open track vibe, it has a 2004 Cobra IRS complete with Full Tilt Boogie Racing goodies. All the work on the car, except for the paint and body, is taking place in Lance’s garage.