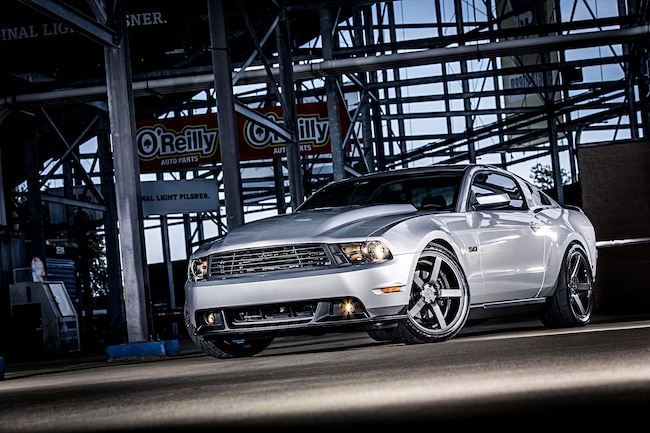 Twenty years ago if you said that Ford would deliver a Mustang GT with 460hp and it had the capabilities of tickling the 11s off the showroom floor, you would’ve been admitted to a mental institution for evaluation. But today, that talk isn’t science fiction but reality. It seems with each passing generation of Mustang, what began in the mid-1980s with the switch to fuel injection, builds upon the previous one delivering a better vehicle in every sense—from style to performance.

Someone who has lived through the generations of improvements is Fishers, Indiana’s John Hartman. His passion for America’s beloved Pony car began in the mid-1990s as Muscle Mustangs & Fast Fords heavily influenced his opinions. By the late 1990s, Hartman was banging gears of a Fox-body Mustang, as his dreams became reality. He was quickly submerged in modifying and drag racing his Mustang, it would be the first of many to come and go from his stable over the next twenty years.

Hartman believes in driving his Mustang everywhere, including to the dragstrip, so durability is paramount in all of his builds. He has had a few Fox-body Mustangs; one of them even graced the pages of Muscle Mustangs & Fast Fords in the early 2000s. He unloaded the 10-second car, as he was attracted to the newer and more reliable 2003-2004 SVT Cobra. Making 600rwhp with a blower upgrade, amongst other parts and pieces, was the easy part. “My old LX wasn’t fun to drive in drag trim and there was always the risk of breaking something,” explained Hartman. The Terminator Cobra packed the fun but not the reliability thanks to the half-shafts in the IRS.

Ford kept marching forward as Hartman satisfied his horsepower itch with a couple more Terminators. Then it all changed in 2011 with the release of the Coyote 5.0L powerplant in the Mustang GT. Whereas the first iteration of the S197 Mustang GT with the 4.6L engine was far superior to the previous 4.6L Two-Valve, the next S197 version trumped anything before it.

“I was drawn to the 2011 Mustang once I saw the Starkey’s (VMP Performance) do their thing with the blower and run respectable sixty foot times (1.50s and quicker) with the stock converter in the stock 6R80 automatic transmission.” Hartman pointed to the simple package of going 10.50s right out of the gate with a stock engine and they did so with reliability. Hartman’s Terminator instantly went up for sale as he went shopping for a 2012 Mustang GT.

The first acquisition, even before Hartman had a new 5.0L Mustang in his driveway, was a VMP Performance supercharger kit. Built around an Eaton TVS 2300 rotor pack, it was ready to make boost right out-of-the-box. Once a car was procured and Hartman added the kit, he was off and running mid-10s with ease. If a little is good then more is better—a smaller supercharger pulley upped the boost to 11 psi and with it came 10.30 performances from his practically stock ride.

From the onset, Hartman believes in two attributes for his Mustangs; drive them everywhere and be reliable. With the goal of adding more boost, Hartman made the wise decision to swap in a Ford Performance Aluminator long-block; it features stronger Manley connecting rods and Mahle pistons, which were far stronger than the stock piston/rod combo. The addition of a smaller 69mm supercharger pulley and a JLT Performance cold-air kit translated to 9.90 runs right out of the box. It was perhaps the easiest 9-second recipe in the history of the Mustang hobby.

The lure to go quicker and faster had Hartman look at a wide-range of easy changes. The first was to convert from gasoline to E85. “We have an E85 station near my house and it always reads 87-88%,” confessed Hartman. Swapping required a recalibration as his fuel system consisted of Injector Dynamic ID1000s and two Walbro 465 lph fuel pumps. The modifications didn’t stop with the fuel conversion. An icebox was added to the trunk to help chill down the intercooler between runs. Hartman added a set of skinny front wheels for less rolling resistance and a weight savings. The modifications translated to high-1.30 sixty-foot times and multiple time slips in the 9.60s.

The next two modifications—combined—would net a gain of 60rwhp, swelling wheel horsepower to a stout 825rwhp. The secret to success was sending the supercharger case to Airflow Solutions where Bret Barber ported it. The short turn, big turn, and sharp box in the supercharger housing were ported and smoothed. The lower intake manifold was also ported. The result was a 35rwhp gain while utilizing the same pulley combination! A larger mono-blade throttle-body proved to be a 25rwhp gain on the chassis dyno.

Once Hartman added the ported supercharger, he had brought in Ken Bjonnes of Palm Beach Dyno to handle the ECU and transmission calibrations, which was in early 2017. All of the tuning was done remotely, requiring Hartman to data log the dyno run and trade some emails until the tune was dead-on. Not only did Hartman hire them to handle the tuning on the chassis dyno, he bought into the Track Side support package, because after all what good is the Mustang if Hartman couldn’t go drag race it?

For a guy who loves to drag race, the Mustang GT is hardly set up to be a dragstrip hero. The engine modifications aside, there are literally four driveline upgrades—a Driveshaft Shop one-piece driveshaft, Stifflers driveshaft safety loop, CHE Performance axle brace, and an Eaton Truetrac differential. The control arms, anti-sway bars, panhard bar, and everything else are completely stock. Hartman did trim the rear coil springs for a better ride height. The 6R80 transmission is also untouched, right down to the OEM torque converter. Using LMR’s line of SVE wheels with Mickey Thompson drag radials and skinnies, the full-weight Mustang has gone as quickly as 1.33 sixty-foot despite the lack of suspension modifications. The quick sixty-foot times were attributed to Bjonnes’ power management with his Track Side support package.

On track, after a few tune changes, the supercharged Mustang unleashed a best of 9.29 at 146 mph! For Hartman, the Mustang is everything he ever wanted. He drives to the US41 Dragway, which is over two hours from his house, races on the tires he drove on to the track, and belts out low 9-second runs. The only work he does once at the track is unload his gear, circulate ice through the intercooler, air down the Mickey Thompson drag radials, and set the computer up to data log.

The combination might be simple on paper but it has been the people who Hartman worked with that have made the project so successful. First is his wife, Dana and daughter, Reese, who allow him to go play cars. Then there are a couple of friends who are ready at a moment’s notice to jump in and help—Jon Colip and Justin Brocky. Palm Beach Dyno has been invaluable in getting the car to make great power and perform exactly as Hartman envisioned. Then there is VMP Performance who’s care, attention, and support helped keep the learning curve small. Mike Ford made the car look great with subtle body modifications while Alex Bruce helped swap the Aluminator into the engine bay.

As for progression—Ford has done a pretty good job at making each passing generation of Mustang better than the previous. Hartman is going to keep to that theme, as his goal is to run 8s! But regardless of how much further the car is pushed, Hartman says it will always be driven to the track and beat on mercilessly! 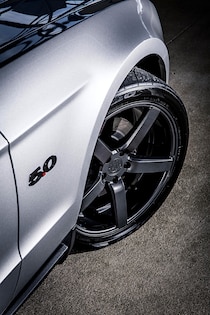