Week To Wicked: The First Road Trip (of Many!)

After some final shakedown driving and a full detail, the Week To Wicked 1966 Mustang was displayed in the TEN booth at the 2017 SEMA Show, then we drove it back to Los Angeles for its maiden voyage 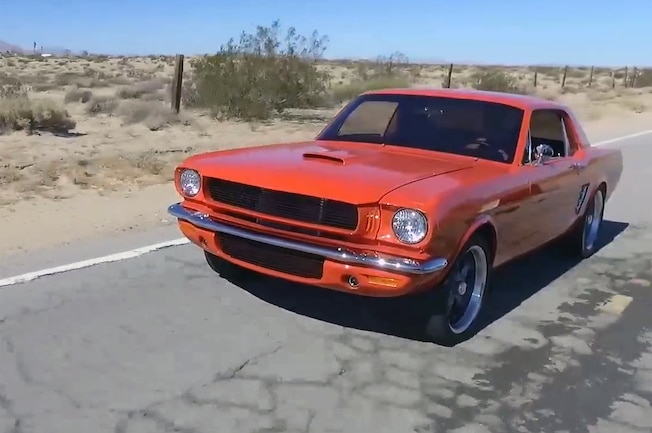 Last summer, in July 2017, we drove a six-cylinder 1966 Mustang hardtop into the TEN Santa Ana Tech Center in California and began a week-long thrash of completely rebuilding the car. That’s right, we did it in a week and the end product is on the road as you read this.

Once the build week was completed and we had a good solid burnout in our pockets (okay, we did ten good solid burnouts) we took the Mustang to Las Vegas where it was proudly displayed in our company’s booth at the 2017 SEMA Show. As the show was wrapping up we had to do a little bit of tuning work in the booth before firing the car up and getting in line with all the other display vehicles exiting the show and participating in the epic SEMA Ignited Parade. With editor Kinnan driving, staff editor Houlahan riding shotgun, and Muscle Mustangs & Fast Fords staff editor Michael Johnson folded up in the back seat, we took the Mustang on its first official cruise—right in front of the entire automotive industry that had collected in the grandstands outside of the Las Vegas Convention Center. We’re happy to report that the car did great and garnered plenty of thumbs ups from the crowd, giving us the confidence to drive it all the way back to Los Angeles, 300-plus miles away.

The next morning we loaded up, and with a rented U-Haul truck and trailer that we had for another project “just in case” following along (at no point did we load the car on the trailer though), we cruised down the famous Las Vegas Strip, stopping at the “Welcome to Las Vegas” sign at the south end of the Strip where the terrible tragedy at the Mandalay Bay resort from a few weeks prior still had mourners gathered. From there, we hit the I-15 through Stateline and into California with a first stop at Alien Fresh Jerky in Baker to stock up on their killer (and hot!) beef jerky. Then we got off the 15 for a while, driving down The Mother Road that is Route 66 through the rural California high desert for a lunch stop at the Burger Den (which was also the very first Del Taco restaurant) in Daggett, California.

From there it was up and over the Cajon Pass and down into Los Angeles, with the final destination being Kinnan’s driveway in Burbank. The car ran perfectly and while the water temp gauge fluttered at 215 degrees at a few points, it never overheated and cruised down the road just like a freshly rebuilt Mustang with a complete CPP suspension, FiTech-injected 500hp Ford Performance Racing Parts crate motor, Performance Automatic overdrive transmission, and Rocket Racing/Maxxis-shod hot rod should.

This video sums up our trip home, where the car is being detailed and readied for its life on the road, with plans to take it to several Mustang shows throughout 2018. Watch for it at the Fabulous Fords Forever show at Knotts Berry Farm in April, and then keep your eyes peeled for a bright orange Mustang at a show near you for the coming year.

Follow these links to the daily videos and photos of the Week To Wicked build of our 1966 Mustang hardtop and see the first burnout video.