With '60s design and 21st-century technology, the 725hp superchargedGT500E is the best of both worlds

It's a valid argument and fun to think about. Why opt for a basic 550hpGT500E when there's a 725hp option available? The 200 extra horsepowerputs you in an exclusive club of Super Snake owners, with a build runlimited to 75 units.

At $150,000 and a little change for options and accessories, you mightbe asking yourself if there are 75 buyers for this car.

The day we took these pictures last March, Unique Performance--theproduction facility that makes "Eleanors" with the full blessing andordination of Carroll Shelby--informed us 18 were on order andproduction had just begun.

That's a healthy number for a '67 Mustang that's 20 grand higher than anexotic turbo Porsche. Douglas Schwartz of El Paso, Texas, ordered thisone. Serial number 009, it's technically the first Super Snake off theline with the full supercharger treatment on the 427 engine. It waspreceded by a red Super Snake prototype, which was sold last summer at aKruse International classic car auction in Las Vegas.

Our minds were stretched on absolutes. We wondered if this Super Snake,in terms of raw horsepower, was the highest-performance Mustang eversold to the public. Doug Hasty, co-owner of Unique Performance, plantedthose seeds of curiosity.

But wait. SVT's Boss was not produced for public consumption. It was aconcept car made to run 10s in the quarter-mile and to wow the troops atshows. A series-produced Mustang it wasn't. The Super Snake is.

Neither Hasty nor his cohorts, David Reed and Bobby Mikus, or the restof the production crew could think of a Mustang with more power.Schwartz was of the same mind. He couldn't think of another Mustang,factory or tuner, that delivered this much horsepower. The '00 SaleenMustang SR is close, a response to the '00 Mustang Cobra R with a baseprice of $158,000, which boasted a blown 351 with 505 hp.

Clearly, the advantage goes to the new Shelby 427 aluminum block,engineered to higher standards than the original but using the sameconcept of big cubes in a high-winding V-8. The Shelby/Vortechsupercharger boosts power into the 725 range.

A look at the spec sheet reveals these early Super Snakes come withcarburetors, notable because Unique recently added a fuel-injectionoption to its '65 GT350SR. Now the company is developing fuel injectionfor the blown big-block as well. 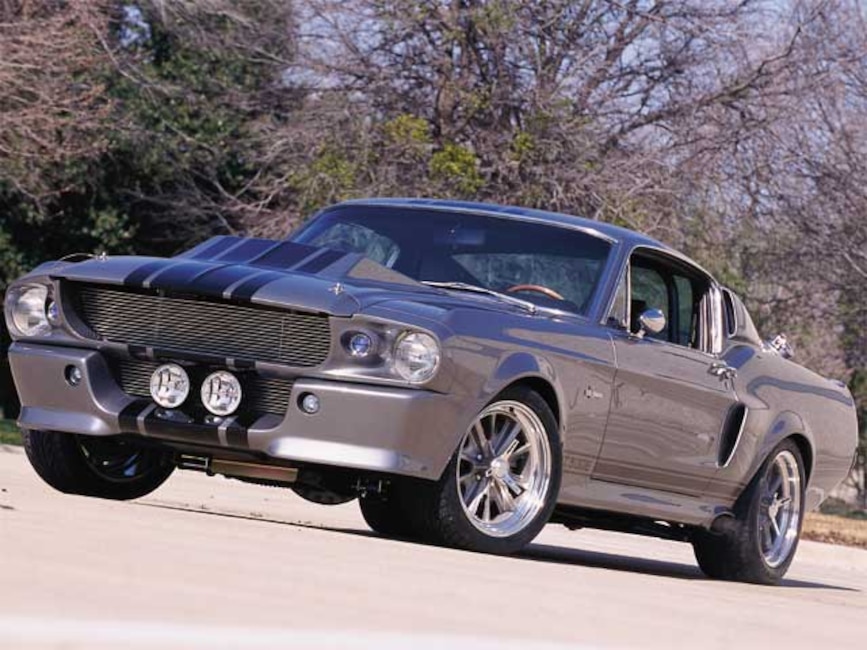 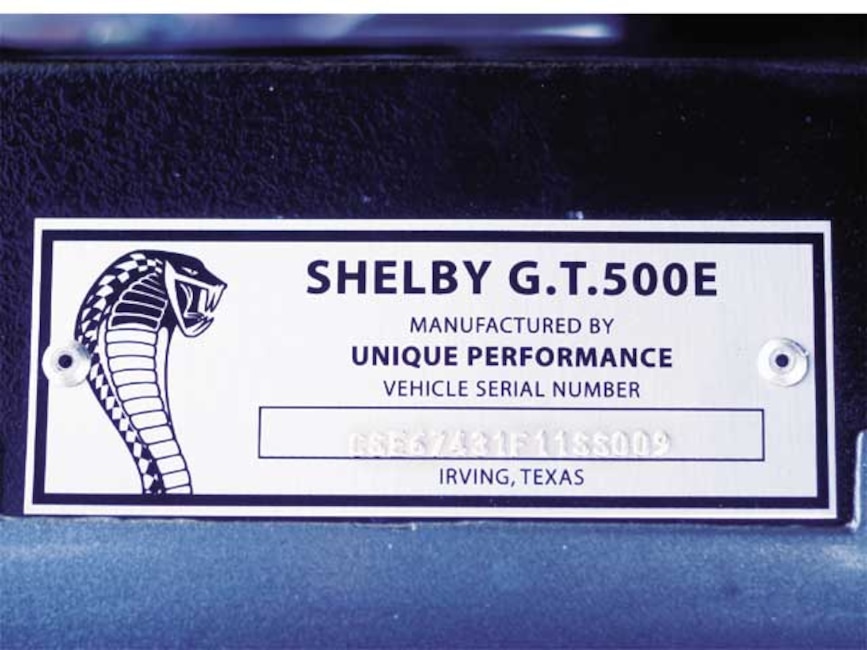 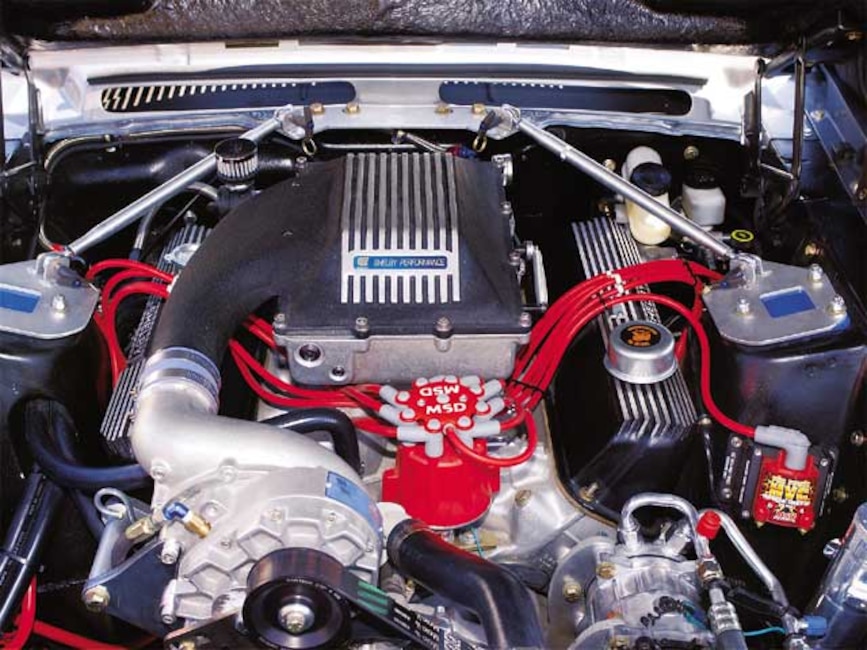 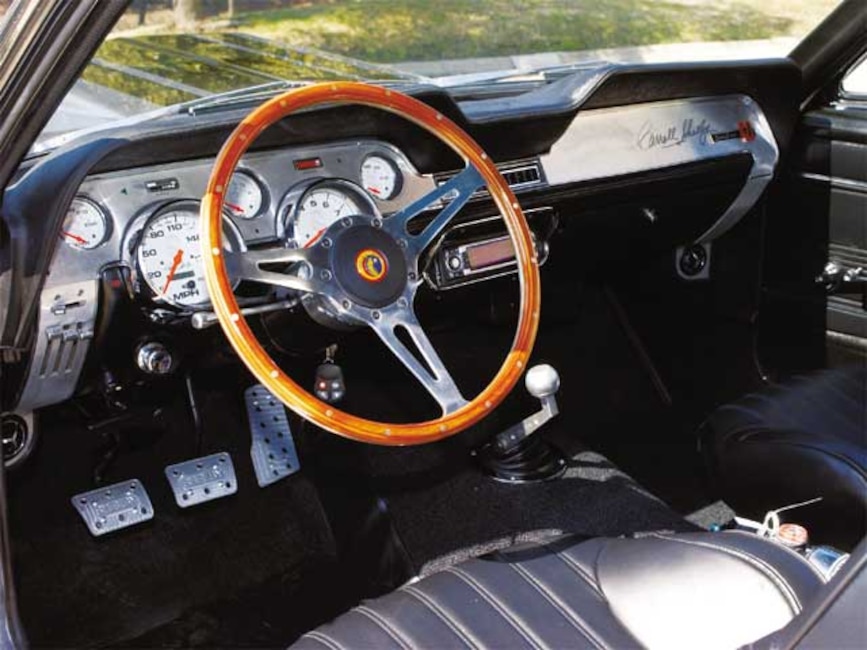 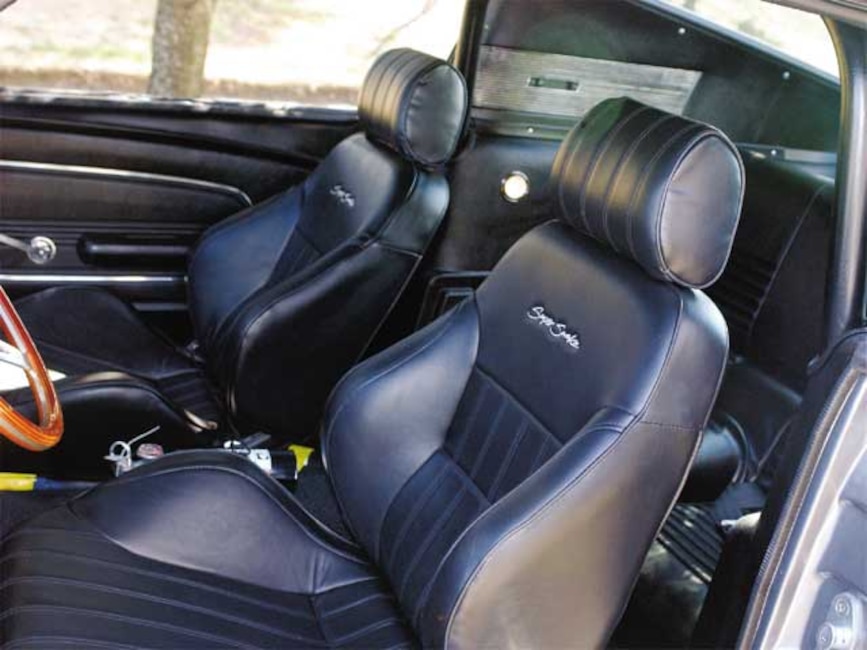 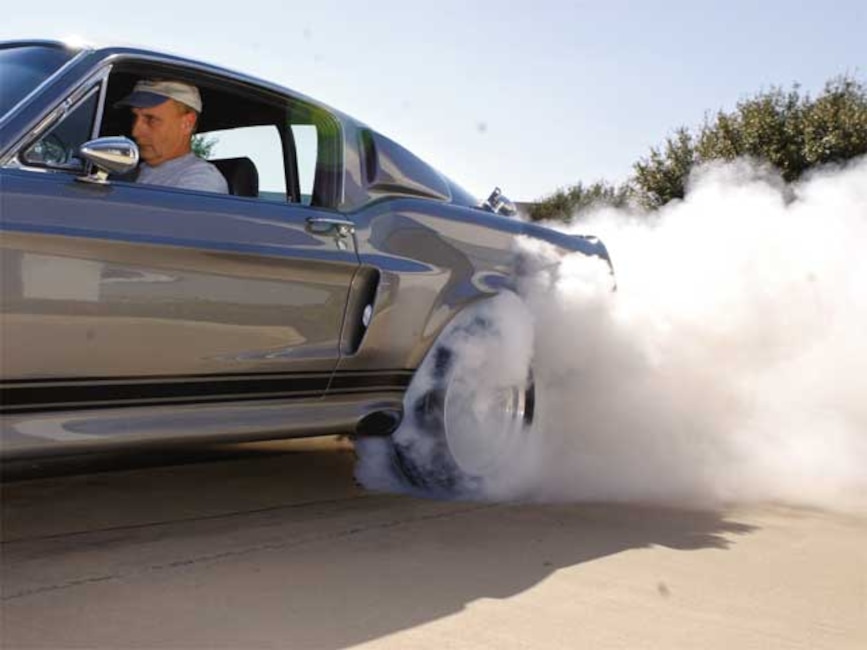 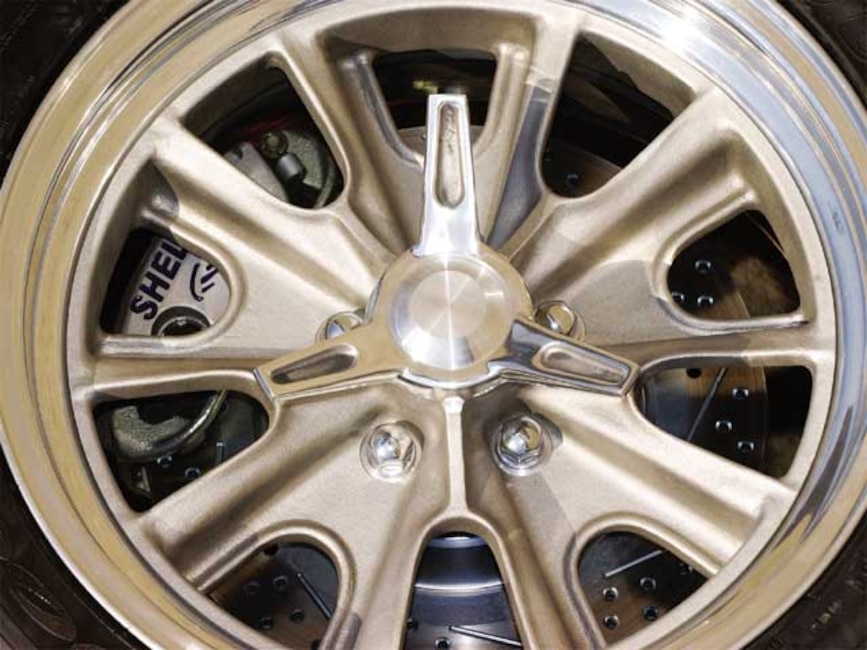 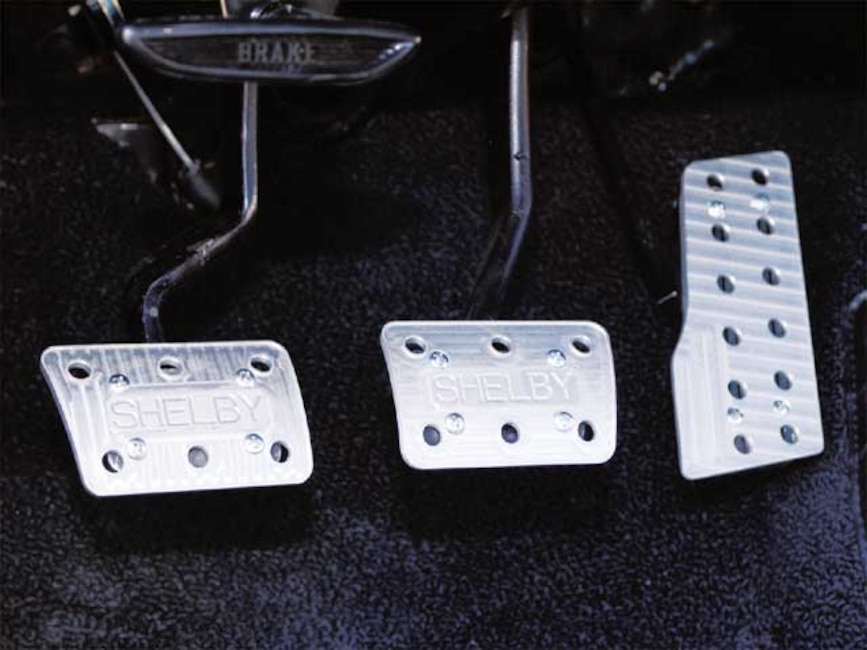 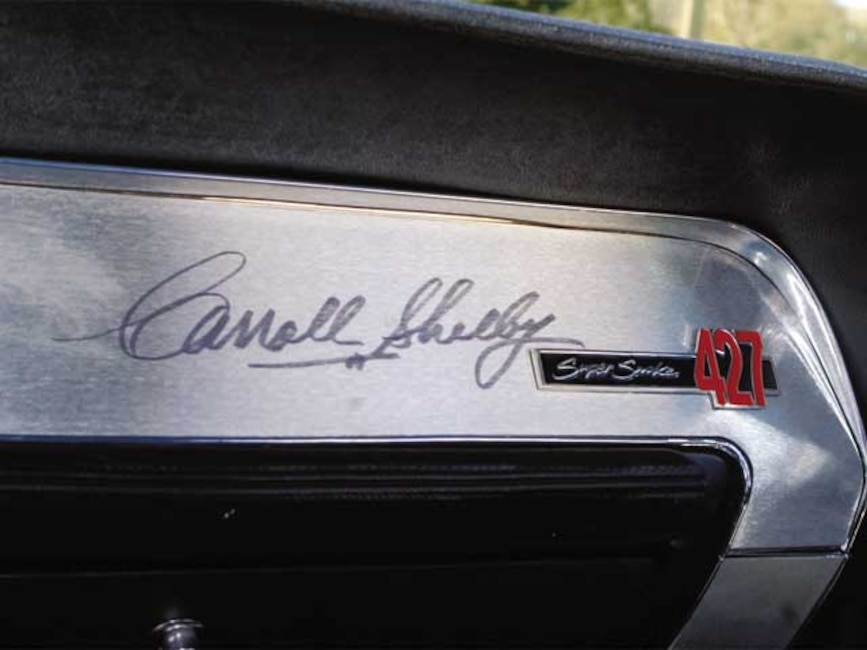 Brute musclecar power, in Schwartz's mind, was not the originalmotivating reason for an Eleanor. The land developer from El Paso gavecredit to the original '67 GT500. "I've always wanted a GT500. That'salways been one of my favorite cars," he said in reference to theoriginal '67 Shelby. "And this was the best of both worlds. I saw it inAutoweek when it was a concept and in the movie. You had to love it inthe movie."

The remake of Gone In 60 Seconds has been the springboard to success forthe GT500E. The car just looked so hot, people had to have one. Schwartzis no ordinary Joe off the street. "I collect old musclecars.Especially, I like drivers. But they all take quite a bit of work tokeep them going. You're always worried about them, always looking forparts. This seemed like the best of both, like having a brand-new '67car that's unlike anything they built back then."

Schwartz referred to the increased horsepower and technology of theEleanor. He could have his cake and eat it too, so to speak. The car wasrebuilt to brand-spanking new. It looked vintage, yet there was noproblem finding parts or restoring or having the car break down. It wasfresh and ready to rumble. "Unbelievable" was his assessment of Shelbybuilding new Eleanor-style GT500s, then he couldn't repress a laugh ashe added, "In fact, I'm in line for a GT350SR, too."

We got to take pictures of No. 009 before delivery; it was specialbecause it was the first. Schwartz determined the car's build. "When Iwas ordering it, they were giving me the different options and Iwavered. I couldn't decide on the Super Snake. It just seemed like somuch more money. But when they talked about limited production and thehorsepower, it was a no-brainer."

Obviously, the Super Snake is the hottest car in Schwartz's collection.He has a '65 Corvette with the 396. His 40th Anniversary Cobra, fromShelby, is a new addition. "That's kind of the same thing. It's a newcar with the old body on it. I bought it after the Super Snake. It's thesame engine as the Super Snake except it has two four-barrels instead ofthe supercharger."

Schwartz spares no expense with his musclecar hobby. "I have a '66 GTO.That's it right now, beside my new Porsche." The German exotic is a newtwin-turbo 911 modified to increase its stock 415 horses to over 600.Although Schwartz had not taken delivery of the Super Snake, he haddriven it for a weekend in Dallas. He could compare the 725-horse SuperSnake to the 600-horse 911 Porsche, which is all-wheel-drive.

"The Porsche has traction. You feel totally in control with thefour-wheel drive. With this thing, you get on it, and that back endbreaks loose and there's nothing like the feeling of torque with theblown big-block.

The 911 throws you back in the seat, but you don't feel the power behindit like you do with a big-block."

Schwartz plans to add a new Ford GT when they come out. It's one of twodream cars, the other being a '65 Cobra. He will have "new versions ofboth cars," but admits, "I would much rather have the old version."

Nevertheless, the Super Snake remains the top musclecar in thecollection, horsepower-wise, no matter what is added.