Inside the Gone In Sixty Seconds Mustangs

Whatever its merits as a film, last summer's Gone In Sixty Seconds wasrequired viewing for Mustang lovers. After all, it's not often thatHollywood makes a movie starring a car, much less a Mustang. And theMustang in Gone was definitely the star. What's with that Mustang? Andthe movie? Those are questions substantial enough to build a story upon.And despite the fact that not everything makes sense in the movie (suchas hitting the nitrous when the engine is already turning 7,000 rpm), weknow you're going to buy the video.

While the 2000 version of Gone In Sixty Seconds is obviously inspired by1974's Gone In 60 Seconds, it's really not a remake. Although bothtitles are pronounced the same, technically, they're not identicalbecause the title of the newer movie spells out the word sixty and theold title uses the number (even though the poster for the new movie usesthe number). That's not bad, though, since (except for the 40-minutechase within its 97-minute running time) the first movie was practicallyincomprehensible. "The major appeal of Gone In 60 Seconds--and it isconsiderable--is that it is a genuine primitive work of art," says theLos Angeles Times, upon the original's release.

Art or not, the idea for the remake germinated at Disney and wound up inthe hands of producer Jerry Bruckheimer. Bruckheimer produced Flashdance(probably not a top pick for the guys in the audience), Top Gun, andDays of Thunder with his late partner, Don Simpson, and such recent hitsas Armageddon, The Rock, and Con Air on his own. With a script fromScott Rosenberg, who penned Con Air, Bruckheimer recruited Nicolas Cageto star and TV commercial director Dominic Sena to direct. Throw in asupporting cast that included Oscar winners Robert Duvall and AngelinaJolie and hopefully the result would be a hit.

The story is similar to the original in that a group of car thievesneeds to steal 50 cars in a 24-hour period. The makers of the new moviethrew in a threat to the life of lead character Memphis Raines' (Cage)brother, Kip (Giovanni Ribisi), to add some emotional wallop to thefilm, but people were going to see this movie based on the quality ofthe action. And the action would include a big car chase featuring, asin the original movie, a Mustang named Eleanor.

When the movie started production, Eleanor wasn't necessarily going tobe a Mustang at all. "We really wanted to see a GT40 blowing throughdowntown L.A., flying down the L.A. River, doing all that [expletivedeleted]," says production designer Jeff Mann. But even for a movie thatcost a reported $90 million to make, a fleet of GT40s was prohibitivelyexpensive. So it was back to Mustangs.

"We were looking at a '67 GT500. It's a bitchin' car, no doubt,"continues Mann, "but does it really stack up against these othervehicles?" This is a pertinent concern in a film that would beoverstuffed with Ferraris. "In the context of all these other cars, it'snot necessarily going to be the hottest thing going down the road (Thatdepends on who you are--Ed.). That's when Jerry kind of opened the doorsfor me to come up with a variation on it . . . ." Building thatvariation that didn't suck started with famed Hot Rod illustrator SteveStanford, who drew up an illustration of an over-the-top '67 GT500.

Former Boyd Coddington designer Chip Foose was hired by the productioncompany to turn Stanford's work into a reality. Foose fitted the carwith PIAA lights in both the nose and rear backup areas. He alsoprototyped the hood, the front valance, the side skirts, the scoops, andother fiberglass parts that would be used for the car. That billetgrille is based on aftermarket pieces originally developed for ChevyAstro vans and Foose found the Schmidt 17x8-inch wheels that would besheathed in P245/40ZR17 Goodyear Eagle F1 tires.

Neither the side-exit exhausts nor the C-pillar-mounted fuel fillers('71 Mach fuel doors) were functional on the cars seen in the movie.Why? First, because actually making the side exhausts work is tough,considering how the '67 Mustang is built. And second, because theydidn't need to be functional. 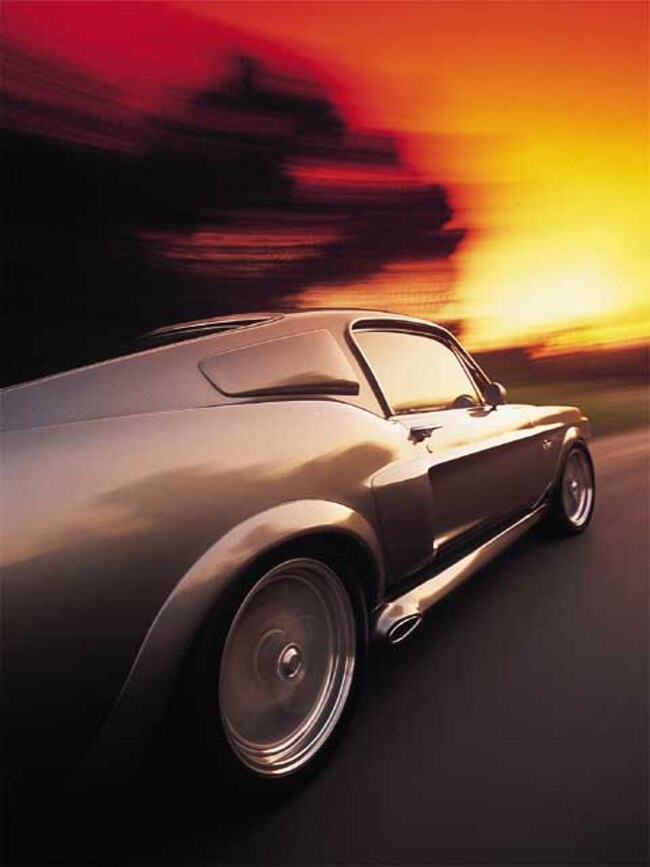 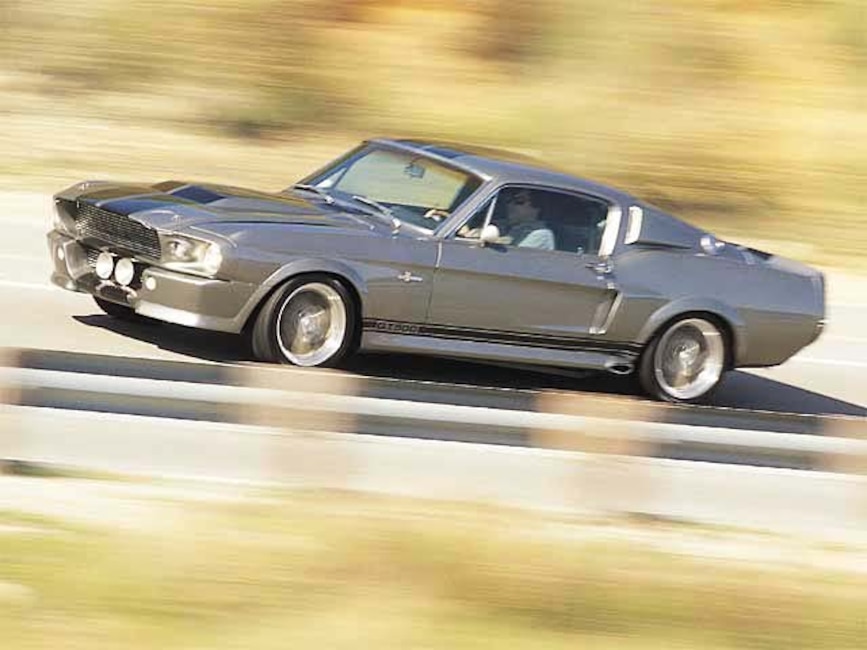 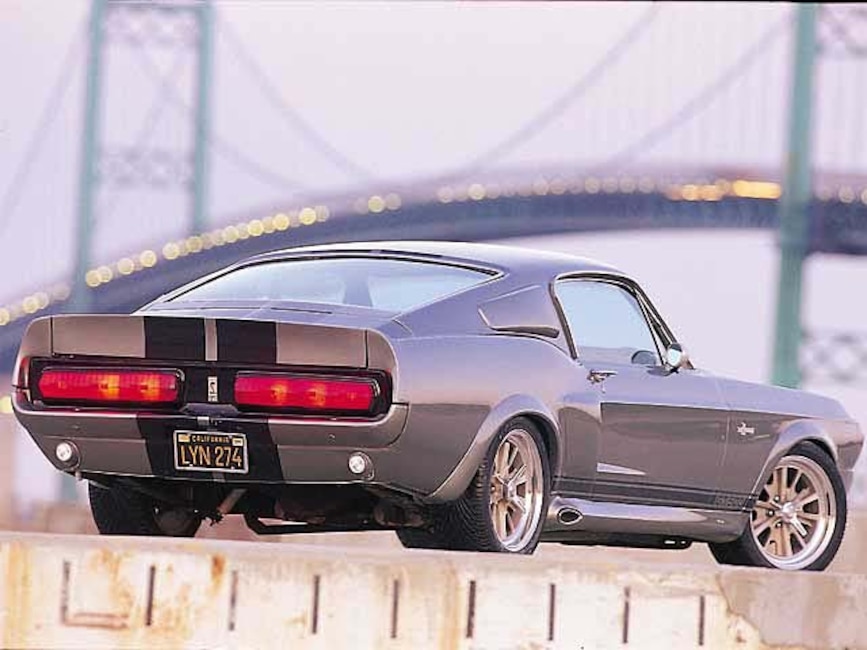 Eleven Eleanors were used in the making of the film. This one was piecedtogether after the movie's completion for photography purposes. Thoughit looks good, it's one used-up '67 Mustang. 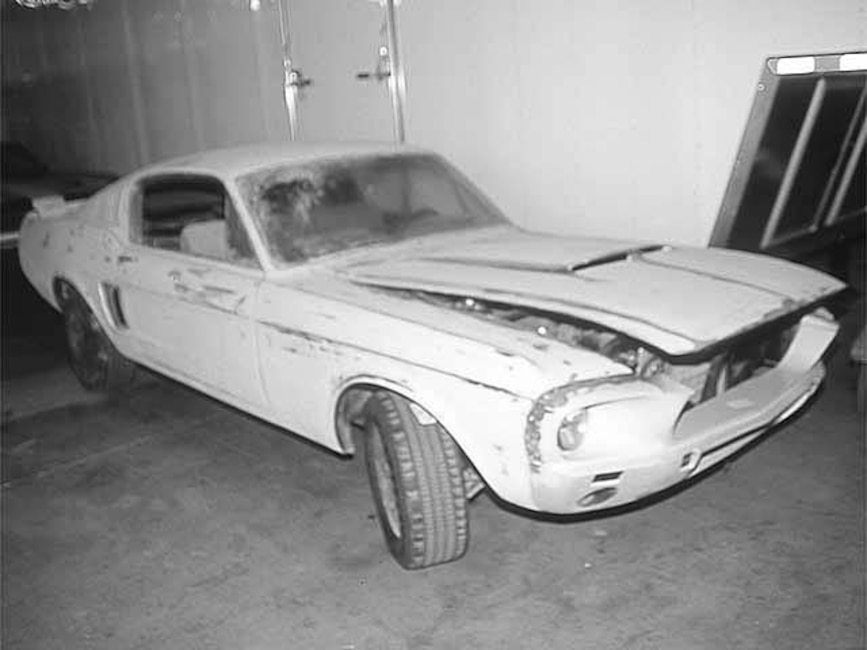 Although it's supposed to be the roughest in the film, this Mustang wasprobably the nicest in real life. It was presented as a gift from thecharacter Kip in the movie to his brother Memphis. 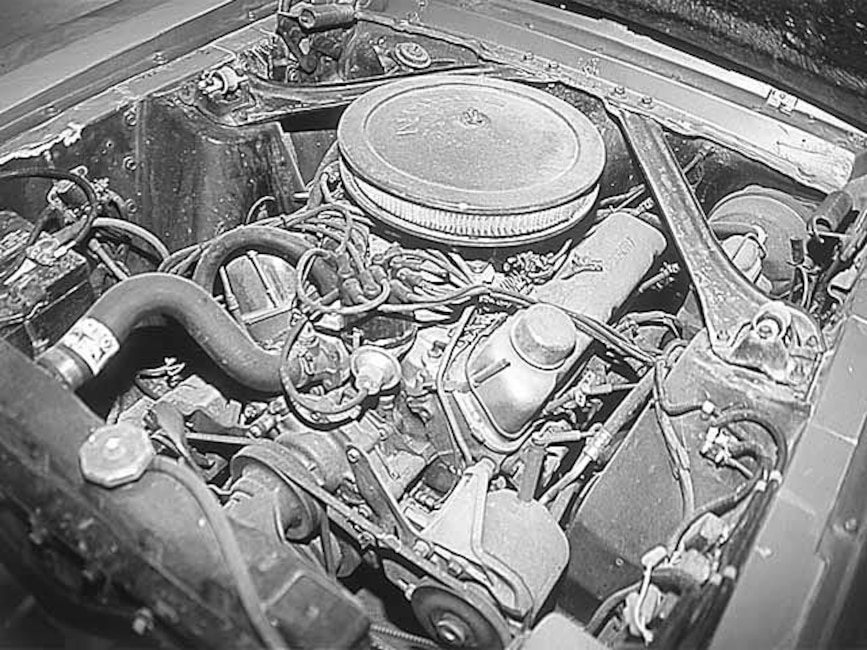 Though it's covered in dust, the engine in Kip's gift Mustang was themost powerful (a Ford Motorsport 351 crate motor) of all the motors inthe other Eleanors. 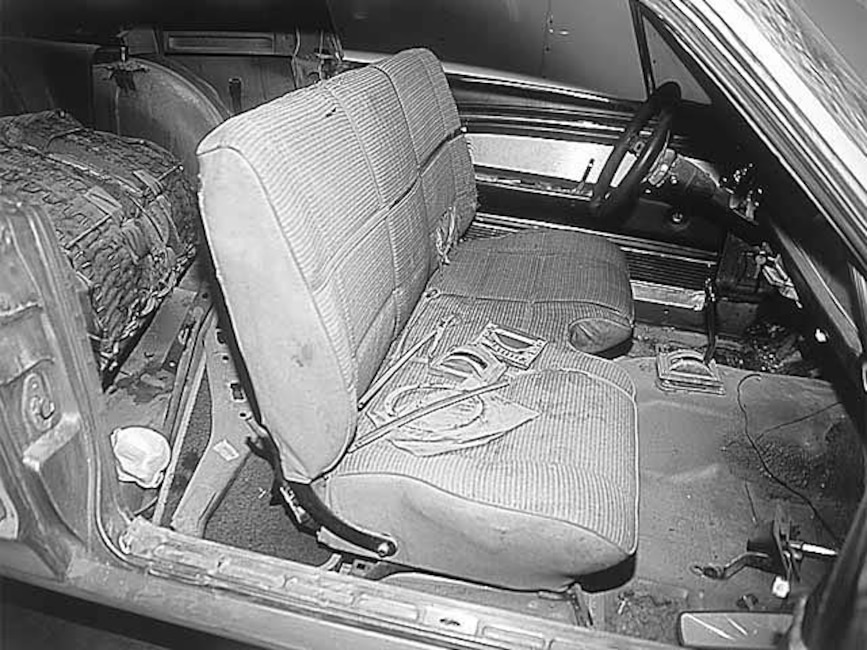 The interior of the gift Mustang may look wasted, but it's supposed tolook that way. Note that the doorjambs have been painted silver,indicating that they painted over a paint job, like all the otherEleanors. 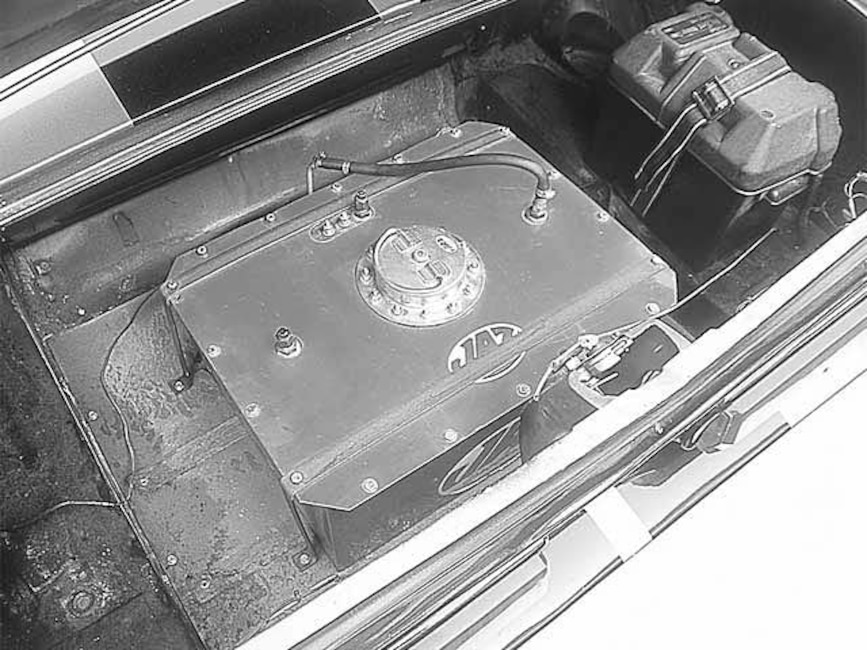 For stunt work, some of the cars were fitted with low-capacity,high-safety fuel cells. Note the battery mounted into a box for betterweight distribution.

Once the prototype pieces were completed and the molds were made, theproject moved into the hands of Ray Claridg's Cinema Vehicle Services(CVS), where construction of the actual Eleanors took place.

"In all my time in this business," explains Ray Claridg, "this was thetoughest show." Because of the screen time the Eleanor Mustang wouldhave and the stunts it would be asked to do, several Eleanors would haveto be built. The occasional improvisation of the production of the filmitself further complicated the issue; script changes were constant andthe needs of the filmmakers practically changed daily. Ultimately, therewould be 12 Eleanors built for the film, including the prototype thatdidn't appear in the movie.

Construction of the Eleanors started with the CVS staff scouring theSouthern California want ads, searching for '67 and '68 Mustangfastbacks. The cars CVS acquired ranged from clapped-out machines withleaky 289s to at least one Mustang GT powered by a 390. All the cars inthe movie are '67s, and none were actual Shelbys.

Because certain cars were required to do different things in the courseof the film, no two Eleanors were alike. Many of the Eleanors remain inCVS' inventory, but they've all been twisted, fiddled with, and rebuiltso many times, it's hard to determine their original condition when theyappeared in the movie. And apparently, CVS didn't take any pangs tocatalog all the cars.

Up close, the Eleanors are a mix of sweet design work and expedientengineering. These cars weren't built to last a lifetime, win a carshow, or go extremely fast; they were built to look good in a movie anddo their particular task well.

Of the 12 Eleanors built, 7 survived the filming to end up back in CVS'possession. Two of the cars were destroyed doing the climactic jump onLos Angeles' Vincent Thomas Bridge at the end of the film. That jump wasdone in segments: in the first segment, a car jumped off a ramp and wasdestroyed during the landing. Another car had a longer jump, and itlanded in a pile of cushioning boxes. That car, according to stuntcoordinator Johnny Martin, actually came out in surprisingly good(though still damaged) condition. Another car was suspended from wiresfor the portion of the jump between the takeoff and the landing. Acomputer-generated Eleanor was used for a few seconds during the jump aswell. And finally, another Mustang was destroyed when it jumped off aplatform and back down onto the bridge's unforgiving tarmac to completethe jump. That car was definitely totaled.

Two more Eleanors were destroyed in the film's final scenes when the caris seen being snatched up in a junkyard and put into a crusher.Destroying that many Mustangs seemed like an utter waste of perfectlygood cars. But it's all in a day's work for Hollywood.

The best Eleanor of those used in the film actually plays the leastpristine of the bunch. CVS was in the process of building an Eleanorwith a new Ford Motorsport 351 crate engine and all the best mechanicalpieces (Versailles rearend, rack-and-pinion steering) when theproduction put out a call for a car to play Kip's gift to Memphis at theend of the film--a ratty Shelby. The car that was in the process ofbecoming the nicest Eleanor of them all--finished in primer, fitted witha derelict front bench seat, and mismatched steel wheels--was chosen toplay that car. So the nicest Eleanor you see in the film, is actuallythe cruddiest looking.

The area under the phony fuel cap of each Eleanor was marked for itsparticular use. The photo car was used for stunt work.

Chip Foose (below left) sculpted Eleanor's body in clay on a prototype.Molds made from this clay were used to cast the fiberglass pieces thatwould be used on the Eleanor in the film.

All the lights on the Eleanors came from PIAA, including both theheadlights and the rear reverse lamps.

This particular car wasn't fitted with rack-and-pinion steering, but theelectronics for the PIAA lights are visible. By the time the photos weretaken, the 390 in this car was tired.

Jerry Bruckheimer's personal Eleanor was modified to look like the otherEleanors but was the only bonafide Shelby. The interior of this 13thEleanor is stock Shelby, except for the AutoMeter tach, the LeCarrawheels, and the fire extinguisher.

(above & below) Bruckheimer's Eleanor still has its original 428 in place, with thestrut tower bracing added.

The Nicest Eleanor of All

Although it didn't appear in the film, the nicest Eleanor of all wasbuilt by CVS for producer Bruckheimer. It's an actual '67 Shelby GT500.The side-exit exhausts function, and so does the fuel filler in theC-pillar. The engine bay brace from Total Control and therack-and-pinion system were also installed, but the suspension itselfwasn't touched. "There's nothing we can't reverse," explained RayClaridg.

This 13th Eleanor is powered by a 428 with dual quads and was convertedfrom its original automatic to a four-speed by CVS. While the exhaustsystem hangs low (low enough to be impractical), it makes a sound thatrattled the condiments off the kitchen shelves at Bruckheimer Films whenit was started in the facility's garage.

It may not have been used in the film, but Bruckheimer's Eleanor has thebest claim to being the "real thing" of all the Eleanors.

While star Nicolas Cage did a surprising amount of the driving in Gone,the heavy lifting was done by a team of Hollywood's best stunt drivers."We've had a lot of man days on this show," says stunt coordinatorJohnny Martin. "It's been nothing but weaving through traffic anddodging cars. And we did a lot of chase scenes in the middle of the day,through downtown L.A., so that pretty much causes a lot of traffic.We've had more than 350 guys work in it [the movie]." However, havingCage in the car most of the time allowed the director to better createthe illusion that he was driving all the time.

Although the car is supposed to be a four-speed in the film, most of theactual Eleanors were automatics. Doing stunts or acting is easier whenyou don't have to manually shift gears.

Each Eleanor was unique, depending on what it had to do in the film. TheEleanor photographed here had a line lock at one time.

Though they were once movie stars, parts of the various Eleanors endedup unceremoniously bundled for disposal at CVS. Haven't these guys heardof eBay?