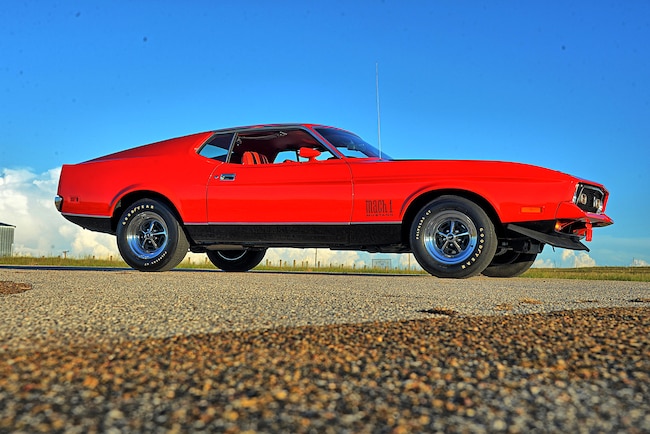 Kelly Schultz wasn’t looking for a 351 H.O. four years ago when he was snow-birding at his second home in Phoenix, Arizona. He said, “I was at the Russo-Steele auction and a buddy of mine, Bill Godwin, walked up to me and asked if I had seen ‘that ’72 R-code.’”

Kelly remembers he didn’t have a ton of time to see it since the Mach 1 was about 30 minutes away from crossing the auction block. He liked the looks of the car and his friend knew of the person that did the restoration, but was not the least bit familiar with him.

The 351 under the hood is an “H.O.” for High Output, and has matching numbers for block and transmission. The 270 horsepower rating was deceptive for 1972, the year Detroit rated engines by lower “net” numbers—meaning the numbers were generated through exhaust and with accessories operational.

The Mach 1 had one of the sportiest interior themes ever seen on a Mustang. The two-tone Mach 1 seats of Vermillion Red and black match the exterior on this car.

The 1971 Boss 351 is a SportsRoof with a Boss 351. No other Mustang could have this engine. It was not an option in a convertible, a hardtop, or a basic SportsRoof. Opting for the Boss 351 motor turned the car into a Boss 351 Mustang, as denoted by special stripes and the unique name obvious on the body.

In 1972, Ford de-tuned the Boss 351 and called the result a 351 H.O. for High Output. The output was indeed high, but not as high as 1971. Horsepower dropped from 330 to 270 for 1972, with much of that decrease of 60 horsepower due to the industry’s rating change to “net,” which yields lower numbers. The 351 H.O. still had the performance features of a Boss, such as a solid lifter cam, a block with 4-bolt mains, an aluminum intake, dual-point distributor, rev limiter, Hurst T-handle shifter (all were four-speeds), and a large four-barrel carburetor. The main concessions to 1971 were less compression ratio (from 11.1:1 to 8.8:1) for lower octane fuel with open-chamber heads and flat-top pistons, plus a slighter milder cam.

Standard with every 1972 Mach 1 was the “Instrumentation Group,” which added a tach and trip odometer plus a triple instrument pod with OIL, AMP, and TEMP gauges.

Schultz is more than a collector. He also likes to buy and sell Mustangs, and has the stomach to make a quick decision and live with that decision. These cars are not cheap, and buying on such short notice is not for the weak of heart. He looked over the Mach 1 and was very impressed to find the Mustang was completely restored, with “90-some-thousand miles and matching numbers. A nice driver/show car,” in his words.

Further bolstered by Godwin’s call that the car was “a really good one,” Schultz won the bid, and suddenly found himself with a Mustang that less than an hour ago he did not even know existed.

The Hurst T-handle is an icon of performance, standard in this Mach 1.

His enthusiasm for the car has continued to grow, and it remains in his collection. He is especially pleased that the 351 H.O. is rarer than a 1971 Boss 351, which had a production run of 1,806. Red with a Vermillion Mach 1 interior, Kelly’s latest acquisition is a four-speed with 3.91 Traction-Lok gears. It has power steering and power brakes, an AM/FM radio, console, 15-inch Magnum 500 wheels, and a tachometer in the dash.

The main difference, practically speaking, with this 1972 H.O. versus a ’71 Boss is the name. Of course, Boss does not appear on the ’72, but Ford didn’t even put High Output on the car. An “H.O.” appears on the air cleaner lid, and that’s it.

At a car show, people perceive this car as a Mach 1 until the hood is opened and a savvy Mustang connoisseur recognizes the decal on the air cleaner lid or the rev limiter.

True, there was no Boss name in the 1972 lineup, but there was a Boss engine. That would be the 351 H.O. There was no big block in the Mustang in 1972—this R-code was the hottest engine in the lineup. Ford didn’t promote the 351 H.O. heavily, and without a special performance label this car flew under the radar, then and now. But for the informed, this car is the Boss of 1972 Mustangs.

Production of the 1972 H.O. Mustang totaled 396, divided between 13 convertibles, 19 hardtops and 366 SportsRoofs—of which 336 were Mach 1s, like the one see here. The taillight board has a black honeycomb texture panel and black stripes. Mach 1 logo is on the rear deck lid.
The Urethane front bumper and honeycomb texture black grille with sport lamps were part of the Mach 1 package.