The Tenth Shelby G.T. 350 Built was a Prototype 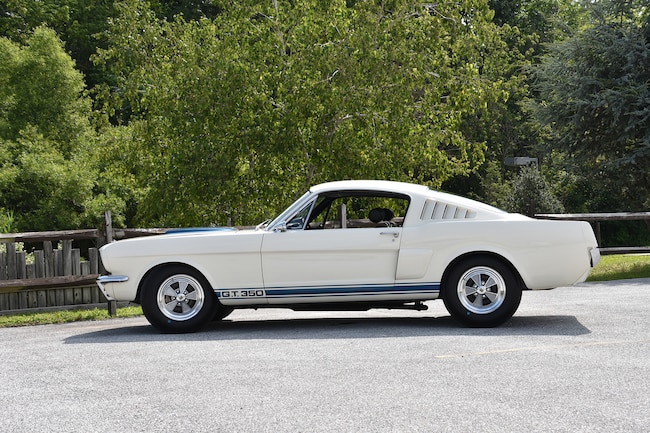 “It came to us in 2014 from a private collector,” Dale Spahr tells us. Dale and business partner Tony Conover sell their share of primo Shelbys through their business, Performance Motors of Hanover, Pennsylvania. With 35 years of Shelby restoration experience, Dale and Tony knew that upon arrival to their shop, this Shelby was something special. Its condition was superb, but beyond that, its history was extraordinary. If today you could go back and write any history for a Shelby, it would be hard to top this one.

Officially, it is SFM5010, an advanced prototype ’65 G.T. 350, and bears the serial number of the 10th production car. It didn’t join its contemporaries on a transporter ride to an eager dealer. Instead, it stayed behind at the Shelby American facility where engineers had some plans for it. Carroll Shelby and staff had ideas and equipment they wanted to try out for possible use as features or options in future production, and SFM5010 was kept around as an advanced development car.

The Shelby VIN tag on this car departs from the norm for 1965 G.T. 350s. The normal format begins with the SFM prefix common to all ’65 G.T. 350s, and is followed by an “S” (for Street), which is followed by the final four numbers. Being one of the earliest Shelbys, this car does not have the “S” Street designation, nor did any of the first 31 G.T. 350s. Other characteristics of early G.T. 350s were hand-painted rocker stripes and G.T. 350 logos, early-style braided stainless steel oil pressure lines, a 16-inch Cobra steering wheel, and white-painted ram air plenum hood.

Records show this car arrived at Shelby American’s Los Angeles shop on December 18, 1964, and its conversion to a G.T. 350 was completed 38 days later. Besides the normal G.T. 350 mods, #5010 was the first G.T. 350 to get a Paxton supercharger setup, blowing through the carb via an aluminum pressure box. A few ’66 G.T. 350s had these systems as special orders, and apparently thought was given to creating a limited run on supercharged G.T. 350S models, but #5010 was the first to have one.

Number 5010 was also used for show and promotional purposes, attending press functions and probably a magazine road test or two. The highlight of its showbiz career came in 1965 when it was used in the movie Redline 7000. In that movie, it’s being driven around a short oval track at speed by a young French bombshell who manages to drift the magnificent Shelby through corners, despite having never driven a fast car before. In its movie appearance, it hadn’t yet been fitted with some of the mods that it would become well known for.

In that sequence, actor James Caan switches places with the French bombshell so she can drive. After reminding her to fasten her seatbelt, he pulls a handle on the dash and opens the exhaust cutouts. This was a functional system, and #5010 still has patches on the dash and collectors where the parts were removed.

Sometime after filming, the quarter panels were opened up and the car was fitted with functional side scoops just ahead of the rear wheels, ducting air back to the brakes for improved cooling. This would become standard on the ’66 G.T. 350s, except convertibles, but again, this was another idea that was developed first on #5010.

One of the design changes being considered for the ’66 Mustang was the wide tail lights, as on the ’65 Thunderbird. Number 5010 was sent to Bill Stroppe’s shop in Long Beach to be fitted with a pair of the T-Bird sequential taillights. They certainly added flair compared to the much more humble standard Mustang taillights, but in the end, the idea was rejected due to cost. Wide taillights from the Cougar did show up on the ’67 Shelbys, however.

Number 5010 stayed with Shelby for nine months, into the 1966 model year. Finally, it had served its purpose and was offered for sale. “After a brilliant career as a movie star and factory R&D car, #5010 was sold to the public through Shelby American’s own dealership, High Performance Motors,” said Spahr. It went home to a new owner in Costa Mesa, California, on October 26, 1965. Nine years later it was sold to an owner in Ohio, who kept it until 1988. It’s been through several other owners and across the auction block a couple of times before ending up with Spahr. Besides its unique and very colorful past, it’s been carefully maintained along the way, and remains in superb original condition today.

Said Spahr, “SFM5010 has 48,800 original miles, and other than a mechanical restoration in the late 1980s and fresh paint at the same time, it is completely original and amazingly well-preserved. It retains every piece of original sheetmetal, as well as its original matching numbers, engine, and drivetrain. The underbody is untouched and immaculate, with factory primers and overspray. The car has never experienced rust or sheetmetal damage, and is one of the finest and most significant G.T. 350s in existence.”

Many Shelby enthusiasts will tell you that of all the legendary Shelby models, none were greater than those original 1965s. There was no identity confusion there—it was a hard-edged, purpose-built machine that didn’t put style before performance. In fact, performance was its style. No air conditioning, buzz windows, automatic transmission, power steering, tilt column, or any of that kind of stuff. And it came in only one color—white, the color of purity.