This 1968 California Special Mustang went into hiding for 45 years. The discovery of the car was the least of the story 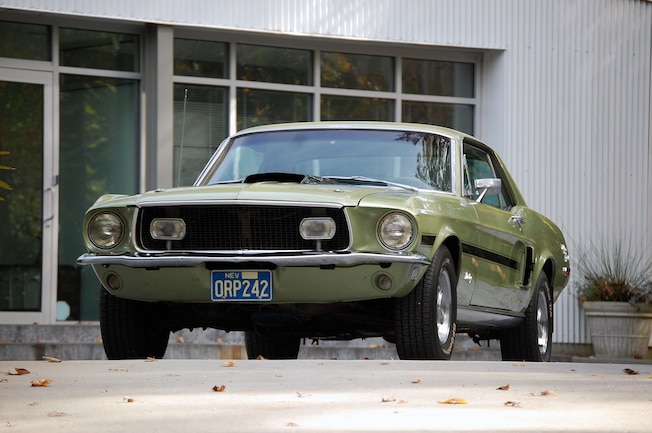 Since the state of California was credited with owning 20 percent of all Mustang sales in the early years, its dealer network thought they were pretty hot stuff and deserved their very own version of this trend-setting car. They chose a coupe for the job, and offered them with almost any engine from Ford’s powerplant menu in order to fill a variety of consumer tastes. Throw in a few Shelby Mustang parts here and there and suddenly an official factory custom car was available to the California driving public.

The version before you is an unrestored 1968 Mustang California Special marketed as a GT/CS. This Lime Gold model was purchased new that year in Pasadena by a mother and son. From that very moment, this Mustang would virtually drop out of sight and remain a mystery for the next 45 years—same for the car’s new owners.

Shortly after its sale to the young Walter Samaszko Junior and his mother Mary, they moved to Carson City, NV following the suspicious death of Walter’s father in Chicago. Senior was said to have been killed in an industrial bakery accident—an event difficult to imagine. Rumors persisted that his death was far more sinister than that, with suggestions that “the mob” had been involved.

The already handsome profile of the 1968 Mustang coupe is enhanced by the addition of the Shelby-like tail-end including the spoiler that looks as if it belongs. Sure, everyone loves convertibles and fastbacks, maybe even especially in California, but the coupe offers a no excuses businesslike style that is undeniable.
To punctuate the cycle of this car’s unusual history, current owner arranged to purchase two of the hundreds of gold coins that were virtually buried with this car for the majority of its life. Here they are. We’re not sure what they are worth, but we do know all of them together add up to at least $7 million dollars.

Apparently, the wife and son believed the rumors enough to flee California for Nevada in an attempt to slip off the radar screen, and they lived there the rest of their natural lives. And that life was so full of paranoia that they actually boarded up the windows of their modest ranch home and were rarely seen in public except for occasional trips to the store in the Mustang, their only car.

This California Special Mustang was delivered with all the usual factory modifications including a fiberglass trunk lid, rear quarter panel extensions with integrated rear spoiler, and mid-sixties Thunderbird taillights. The car’s non-functional rear brake ducts were made functional with the correct Shelby components, apparently by Walter Jr. or the dealership. The fog lights are made by Lucas indicating the Mustang was a later production model. A pop-open gas cap and competition style hood locks round out the standard California Special features.

The taillights on the California Special are straight from the 1965 Thunderbird but are not sequential, yet otherwise nearly identical to those on the 1968 Shelbys. The pop-out gas filler cap is also Shelby-like but proudly sports a Mustang emblem instead of a snake. Notice the nearly immaculate original chrome on the rear bumper.

Either Walter or his mother had the dealer install a functional Cobra Jet hood scoop. A neighbor who once met Walter’s mother in the grocery store was supposedly told that it was she who ordered the hood scoop. Although it seems likely this addition was the idea of Walter Jr. One of the two also had curb feelers mounted to this car as well as a plexiglass bug screen on the front of the hood. Those particular items were removed by the new owner for obvious reasons, but she still has them tucked away.

Neither son nor mother held any kind of job in their lives even though Walter Jr. was a formally trained engineer which probably accounts for a number of tweaks he gave this car as a young man. Still, their invisible source of income was a mystery to the few people who knew anything at all about them.

Original brake ducts were essentially the same as those used on the Shelby Mustang but they were not functional on the California Special. Thanks to the obvious enthusiasm of the original owner they were made so with all the correct pieces.

The mother passed away in 1992 and the son stayed alone in the house until his passing in the summer of 2013. Sadly, Walter Jr.’s death went undiscovered for over 30 days. By then, the neighbors became concerned and called county officials to come and investigate. They found Walter deceased alright, but also discovered considerably more than anyone would have bargained for.

Besides a little bit of cash, a number of firearms and the 46,000-mile California Special, they also uncovered boxes filled with seven million dollars in gold coins minted in a variety of countries around the world, all stacked up next to the Mustang. The value of these coins was calculated by their total weight times the current price of an ounce of gold. This calculation does not take into consideration the rarity of many of these coins which could sell for several times more than their worth in weight to coin collectors everywhere. Some of the coins were even minted in the 1800s.

After nearly a half century the interior on this car is extraordinary. The carpet may be faded a bit but all other components inside are perfectly presentable. With the exception of a split seam on the driver’s seat, there are no other noticeable cracks, holes, bad stitches, or anything else. Even the head-liner is ‘holding up’ in the most literal sense of the phrase.

At this point the estate was turned over to the county clerk of Carson City. Since there were no apparent immediate relatives to be contacted, the county went into a search mode to find the nearest kin. A guest book from the mother’s funeral services uncovered a distant cousin in California who would officially become the heir to this fortune.

Meanwhile in Atlanta, GA, Sara Petersen was in the market for an interesting classic Mustang and read about the ordeal of this family in a number of newspaper reports re-circulated online after the discovery was made. Interestingly, only one or two reports made any reference at all to the Mustang as they described the bounty left inside the family’s house. So, a call was made to the administrator of the estate to investigate the status of this unusual Mustang California Special—only about 4,000 were ever produced. Sara was told the car was to be auctioned off to the highest bidder. So, even though she was unable to travel to Carson City to inspect the car Sara placed the winning bid over the phone, right then and there.

Walter Junior apparently made and installed the engine-bay brace, which seems sturdy enough to provide some extra stiffness to the area. The original 302 engine looks its age but when it talks through those FlowMaster mufflers, it still sounds like a young street punk ready to brawl. Notice the Delta Mark Ten capacitive discharge ignition box tucked into the fender well. Another addition from the car’s original owner.

The car’s new owner has no plans to restore it, a process that would virtually dilute its almost unimaginable history and character. The rusted-out exhaust system and its mufflers had to replaced in order to make it drivable and because Sara has an ear for hot rods and muscle cars, Flowmaster mufflers got the nod. Her husband Steve wishes they were a little quieter, but Sara had hoped they would be just a tad louder. Either way, it gives this Mustang an authoritative voice in the crowd everywhere it goes.

The car is driven on special occasions over the mean streets of Atlanta and can regularly be seen at any number of cars shows where it always generates doubletakes from fellow enthusiasts. This rare Mustang’s new owner isn’t really interested in entering the car into any sort of actual show competition. What would be the point? After all, this is one California Special that has already been surrounded with real gold for almost half a century.