Growing the Mustang Hobby: Timothy Baba uses his 1969 Mach 1 restoration as a means to connect with his two daughters 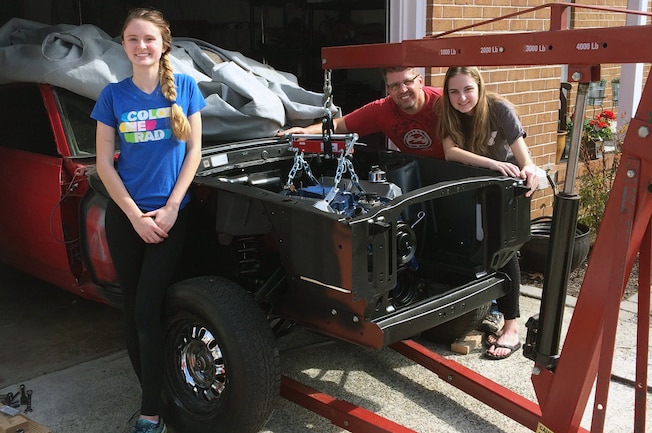 As the longest continually built domestic performance car, the Ford Mustang has millions of fans. Some love every year of production, while other, shall we say, more fickle fans only like a certain generation (be it classic, Fox-era, etc.). We’re not here to argue, though as fans of all Mustang models/years we do hope to educate those with a more narrow focus and help them open their minds to all the other Mustang model years they’re missing out on (yes, even the Mustang IIs).

It’s no secret too that over the last 15 years or so the classic Mustang attendance at major shows has been supplanted by the late-model owners displaying their rides. Many of these same owners have classic Mustangs as well, but prefer to drive their late-model Mustangs to said shows. This is also why we promote building restomods and customs. We’d rather see a nice custom classic Mustang at a show than none at all.

Back from paint, the Baba’s 1969 Mach 1 is ready for assembly.
Having his daughters help on the Mustang’s restoration has been a great bonding experience Timothy tells us.

It’s also no secret that the majority of classic Mustang ownership is north of 40 years of age with those under 30 often driving a late-model Mustang, if not some import car (Ugh!). So any time the hobby can engage our youth, from model building and coloring book contests, right up to getting teens involved in building/restoring a Mustang, it is good for the growth and continued livelihood of said hobby. A perfect example of such engagement is going on in the Baba family garage right now and they shared a few images with us so we could share their story with all of you.

Both girls have worked hard on the restoration, including cleaning, painting, detailing, installing parts, and even a bit of welding! Here they both tackle the Mach’s 9-inch axle housing, preparing it for paint and detailing.
Posing with the Mach’s freshly detailed 428CJ big-block, we have to wonder how they’ll decide who gets first dibs on driving the Mustang! Ha!

Timothy Baba’s 1969 Mustang Mach 1 has been a family project for just over a year. Timothy is “rounding Third base” with the project, as it is now back from paint, the engine is rebuilt, and the car is going back together with the help of his two daughters, Kaitlyn, 17 and Nicole, 15 and even some help from his wife, Kathy. The numbers-matching Mach is powered by an R-code 428CJ that is backed by the original C6 transmission. With 76,000 miles the Mach was quite original but needed fresh paint and TLC to get it back to show-worthy status. The Marti Report shows Visibility Group, Tinted Glass, Power Brakes, and a 3.50-geared Traction-Lok. With the Candyapple Red topcoat and list of options the Mach is a “one of one” according to the report.

Timothy tells us the work has been rewarding and is a great family bonding project. Upon completion Timothy plans to keep his daughters involved in the hobby by taking the Mach 1 to shows as a family. Now that’s the way it should be done. Our hat is off to the Baba family for involving their daughters and keeping this Mustang hobby we enjoy alive and well with youth involvement.

With dad running the engine hoist Kaitlyn and Nicole guide the FE big-block into place.
Fresh from paint the girls couldn’t help but snap a photo with the family Mustang.
The Baba family Mach 1 in its current state. Suspension and brakes in place, drivetrain installed, and working on interior and electrical right now.