Research & Development: The Maier Racing Mustang may look like another slapped-together SEMA build, but it’s a well-tuned machine that slices air 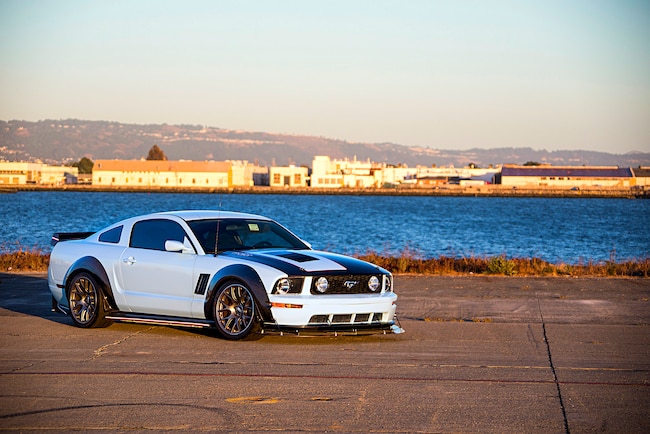 Would you believe this car was built with bolt-on parts? It took Charles Maier and the team at Maier Racing almost 10 years to build a car that we could essentially build in a week. No, they’re not slow, but instead have reworked this Mustang multiple times, finely tuning it to near perfection, all the while using it as the test mule for Maier Racing’s line of bolt-on parts - an R&D lab on wheels.

"We wanted a car that looks great, functions and ultimately simple to install parts,” said Charles. Most every body part on the car is bolt-on from the Maier Racing catalog, and that was the point. “The body is 50 percent carbon fiber.”

The front splitter is actually a spoiler and two splitters, one stacked on the next. This was a method to help clean the air that travels under the car. Bilstein cannester shocks and Eibach springs handle suspension duties up front.

When Charles first got his hands on the keys from his father William, he immediately drove it to Saleen in LA for a 2005-2009 Saleen VI SC Supercharger Kit. When the car returned, the family tore into it. William worked on a wide body kit, while Mike built the 6-point roll cage using 1.75-inch tubing x 0.095-inch wall tubing. Charles was working for K&N at the time the project started, but soon branched out on his own, consulting in North Carolina.

In 2013, his father’s health was deteriorating and Charles returned to the shop. Around the same time, Mike opened his own shop Mike Maier Inc. (MMI), in Livermore. Mike kept “Ole Blue,” a 1965 Mustang with NASCAR drivetrain and the 2005 project, while a complete car, had lost steam. It became the shop car and go-to for lunch stop runs, “...to grab a quick burger and do a burnout there and back; it was falling apart” said Charles. This rendition of the Mustang featured black paint, a red interior and dad’s widebody kit.

The cantilever suspension features a carbon-fiber base plate with a custom weave, along with a pair of JRi shocks and PAC Racing springs. Several attempts were made to get the exact spring and valving combination. Track-side adjustments now simply means popping the trunk.

The most predominating feature on this car is the aero package; a complicated system, but well thought-out execution of aerodynamics, making the air advantageous to the car rather than the enemy. Up front are three separate diffusers. Beginning with the top piece, a carbon-fiber version of a factory lip, it provides a flat and strong surface to mount the other spoilers. “Ford uses polyurethane body work, so we designed a carbon-fiber piece to handle a bolt-on spoiler,” said Charles.

The second covers more than the top and originally acted as a single spoiler. Charles wanted another piece to be lower and larger, so he added the bottom spoiler, which covers the entire undercarriage to the back of the oil pan. Now, instead of the middle piece acting as a spoiler, it helps to channel airflow. Hidden between all three pieces are two channels of aluminum in a V shape, this helps smooth airflow and direct air through the middle of the car. Ultimately, the design “cleans” up the air by making it less disruptive, which provides less lift at high speeds. It’s a similar to that of some hypercars, with front diffuser exit panels around the firewall, and ductwork to help clean and channel airflow.

The rear bumper was designed by papa William, because he loves center exhaust exits. Charles built the hypercar-style rear diffuser panels around the exhaust. The exit for air also helps to keep that air clean through the entire length of the Mustang.

The picnic-table spoilers at the local import cruise nights are laughable, but if you’re really dealing with big speed, you need a big spoiler. Rear spoilers can often appear silly, but functionality comes at the sacrifice of visibility. The Maier Mustang’s rear spoiler is moved back from the edge of the trunk six inches. “The further back you move it, the more functional it gets, because that’s where the clean air is,” said Charles. The wing looks good, but with serious racing, Charles suggested adding about 3 inches of plexiglass so you can still back out of the driveway. “You want to go back and up, if you go straight up, you’ll have to go double the distance to get to the clean air.” Charles has yet to wind-tunnel test the Mustang, but claims it’s stable at 120 mph.

When the Mustang was the shop car, the rear suspension was lowered to less than an inch of travel, resulting in violent handling characteristics, as the car was often bottomed-out. But keeping the low ride height, big wheels and stock 3-link while still be able to utilize full suspension travel, would take some overhauling.

The stock hood was used as a template for the carbon-fiber version, with off-center louvers. “Mustangs can always use more vents in the hood, especially with supercharger heat,” said Charles. “We made two sets of louvers, installed one and said, stop! It looks functional yet, different.” Who said symmetry is a must?

“The 2005 Mustang has room in the trunk, the shock towers are far enough apart and the car is originally a 3-link, so there’s no reason to completely redesign it,” said Charles. He dove into the parts cabinets for a cantilever suspension system; originally designed for Gen-1 Mustangs, it wasn’t a big seller, largely due to the hefty price of $8,500. "As far as the fit, form and function it was easy to install.” They did spend plenty of time developing the carbon-fiber base plates though.

Rear gears are now 3:89, and the driveshaft was replaced with a one-piece by Driveline Specialties. The wall thickness of the drive shaft is thinner, but the overall diameter is larger, which dropped 12 pounds over the stock two-piece driveshaft.

If you look beyond the development and engineering that’s gone into the expensive carbon-fiber, and trick rear suspension, the car is mostly stock. Charles and his team fine-tuned the car to be the best Ford it can be. It wasn’t necessary to rebuild it. They perfected the Mustang brakes by utilizing Dynalite brake pads and Wilwood calipers, but kept stock diameter rotors. The stock fenders feature bolt-on flares. The original engine breathes through a supercharger kit and behind it, a lighter driveshaft - every upgrade was a conscious move.

Inside, Charles called on friends back east, Composite Fabrics of America in Taylorsville, NC, supplied the custom-woven raw carbon-fiber cloth, which is consistent throughout the car. Charles and his team made the seats and foam inserts to match Charles’ seating position using material from Impact Safety Equipment. There’s also a trick set of carbon-fiber floor mats.

“Sometimes people enter their cars in competitive events and quickly figure out what’s wrong, or you can go a little at a time and work out the bugs before you get there,” said Charles who didn’t quite commit to racing an event like the Optima Street Car challenge, but it’s certainly on his radar. He hinted he may be underpowered.

With only 30,000 miles on the car, it’s been the icon for the next era of Maier Racing, hopefully Charles will drop some more power under the hood and race. Maybe?

The brakes are mostly stock, but with some very fine tuning, as Mustang brakes of that era are junk. The team dove into their pile of Indy parts and recycled a pair of Dynalite rear pads with 4-piston Wilwood calipers, and stock but drilled rotors. Up front, stock-sized, 12-inch drilled and slotted rotors were used with Red Devil Calipers from the Maier Racing Sprint car inventory. 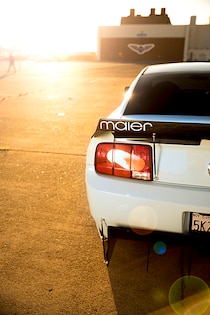