To Restore or Not to Restore. Sometimes A Tough Decision To Make 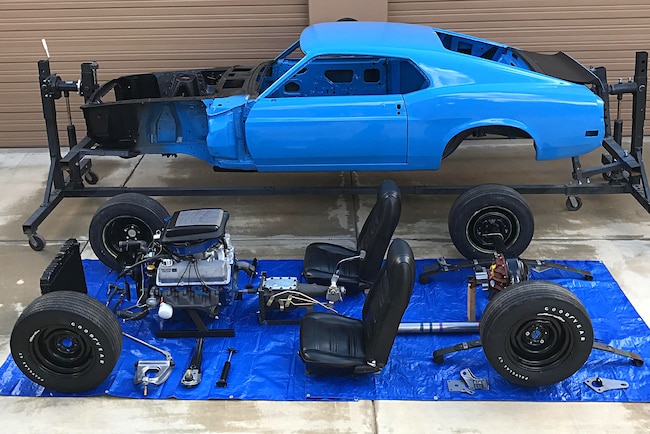 The first generation Mustangs that we all love and enjoy are now quickly turning 50 years old. In that time many cars have been restored—some more than once—to meet or exceed today’s judging criteria that keep evolving to higher standards. The other side of the coin tailors towards the restomod market as technology continues to move forward and we want to enjoy the same creature comforts in our classic cars. No matter which route you choose, bringing these cars back to life can be a very fulfilling journey. Mustangs today are still as popular as they were when they were first introduced to us in the mid 1960s.

One aspect of many restorations that comes up, is the simple question if a particular car should be restored, or not. An easy question to ask, but not always an easy question to answer. After all a car is only original once, and when it has been repainted or rebuilt it will never ever have that claim of originality. Which brings me to Tim McGuire, who contacted me in early 2015 about his Boss 302. As it turns out he has owned and enjoyed his car for about 30 years. It’s as much a part of his family and his history as anything else he has. Tim watched his son and daughter grow up and has been around for many events and the car has been to every single Boss reunion in the country for shows and track events, so it’s well traveled as well. In fact his car is the only Boss to attend all four Boss reunion events (Carlisle, Knott’s Berry Farm, Tulsa, and Detroit).

Tim and Tom in their Mustang pedal cars, Christmas 1968.
Tim and Tom’s “real” Mustangs without pedals in 1983.

I still remember the first time I flew out and met Tim and his wife at their home in Dallas, Texas to look at their car. I was especially impressed by the overall solid body and many of the original parts that were still on this Boss 302. I was happy to take this project on and be a part of this continued story. Since I only work on cars that peak my interest or have a special story, this one fit the bill perfect. It truly was an excellent candidate for a restoration as it was originally sold in Texas and spent its whole life in Texas.

Once the car was delivered to my shop, Anghel Restoration in Scottsdale, Arizona, the real work started. Collecting and supplying NOS parts needed for the restoration was already happening quietly in the background. Meanwhile, disassembly progressed so we could get down to bare metal. Rust issues were minimal, however the car had seen one or two fender-benders in its life. It was time to correct all of that and rebuild the motor, suspension, transmission, and every single major and minor component on the car. A true to the definition “nut and bolt” restoration where every single piece of the car would be restored, refurbished, or detailed—nothing was left untouched to bring it back to that factory day one look and feel.

But behind every story of how the nuts and bolts are put together lies a human story as well. For that part I really thought it best to share what Tim wrote to me in his own words here:

“I have been a Mustang fan since I was a little kid. In fact, I have a picture of my twin brother Tom and me in Mustang pedal cars on Christmas morning in 1968 when we were three years old. To me it was the car I was always wanted and that fate was sealed in Boss Mustangs when prompted by a magazine article I read at age 13. I still have the magazine. Based on that article, I knew that one day I would own a Boss Mustang. I had never seen a Boss in person, so when I turned 16 in 1981, I fell back on buying the next best thing, a 1970 Mach 1. It was a great car. 351C, 2V, auto, ac, pb, power steering, competition suspension, etc. The car was white with black stripes and had sport wheel covers and a rear spoiler.

“In 1982, while working at a grocery store, a guy delivering bagged ice saw my Mach 1 in the parking lot and inquired with several people to find out who owned it. We ended up talking and it turned out he was a big Mustang fanatic. He had several cars including a Calypso Coral 69 Boss 302 and the Grabber Blue 70 Boss 302. The 69 was mint and he wanted $6,000 for it. He had judging sheets showing that it had scored 490 out of 500 points at several recent events. I recall it had two flaws called out on the judging sheets: A Hurst shifter and 1970 painted side mirrors. Otherwise it was as good as they got in 1982. But $6,000 was too rich for me so I put my focus on doing a deal for the ‘70. It was a bit rough and unrestored. Upholstery was a bit worn, the engine was recently rebuilt, it had 351c 2V headers on it with rusted-out glass packs. Despite that, I ended up trading him my Mach 1 and some cash to buy the ‘70 Boss. So at that point in time, I had my dream car and my brother Tom was driving a 1969 Mustang convertible.

During the restoration process at Anghel Restorations. 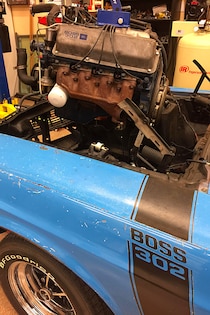 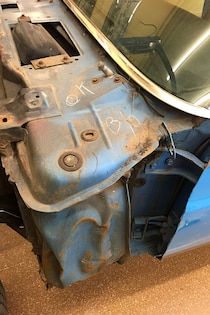 “I rebuilt the engine that summer and drove the Boss through the remainder of high school and for several years in college. I did repairs and some minor work as time and budget allowed. Over the years, I had taken the car to car shows and open track events all around the country—too many to list here. Some are notable (participating in Mark Brown’s caravan to the Carlisle reunion with several dozen other cars) and others less so. Tom and one of my older brothers, Terry, usually joined me on my road trips to Mustang events.

“Throughout the years, I have spent quite a bit of time thinking about restoring the car. It drew a lot of attention as an unrestored car, which I enjoyed. People would walk down a row of beautifully restored cars and stop at mine. Everyone asked about its story and offered opinions about whether or not to restore it. At the Boss Reunion in Detroit, Donald Farr (Mustang historian and author) selected my car for the Ford celebrity’s choice award, based on the fact that it was one of only a few unrestored Bosses at the reunion. It’s true the car was not that nice and was missing some Boss parts. But then again, they are only original once, right?. So, to restore or not was a very hard decision. There were several times that I was ready to start the process and then never followed through.

“Fast forward to 2007. In April of that year, my twin brother Tom died of esophageal cancer at the age of 41. He left me some money in his estate. He had told me that he wanted me to use the money to restore my car someday when I was ready. For years I just sat on the money. I still wasn’t sure if I wanted to restore the car and I felt odd about having the money. It was just a reminder of losing my twin brother.

“The decision to restore: In February 2012, I was diagnosed with cancer myself. It was not the same type of cancer that Tom had. I had a neuroendocrine cancer tumor in my small intestine that was causing an obstruction. I had a resection to remove about a foot of my small intestine and 10 lymph nodes in the area. After the surgery, I was told the pathology indicated that there was probably still cancer left behind. However, since it was a very slow growing cancer, I may or may not need additional surgeries.

“After recovering from the surgery and all the emotions around that, my wife Margot and I decided it was time to restore the car. There was no reason to sit on the fence any longer. Although my prognosis was very good, you never know what the future holds. That’s when I started talking again to restoration shops and eventually reached out to Marcus in Arizona.

“There are many, many reasons to restore a car and equally as many reasons to leave things as they are. I can sympathize with Mustang owners who have gone through that process. In my case, it became an easy decision. It was time for the next chapter.

“I appreciate Tom’s contribution to the financials and now look forward to the shows where I can display it and tell the story about Tom and his influence on my decision to restore the car.”

Tim’s story is just one of so many I have heard over the years about cars we own and cars we once owned. The human story and connection we have with the cars we own is undoubtedly an interesting story. How many of us still think and dream of that one car we once had and wish we still had. Not too many things in life are like that. And sometimes waiting too long we never actually get to see the day when a car is restored. I’m really happy to have been here and been a part of this process so that 15 months after we started we finally brought it all full circle and back to its day one condition as it was ordered and sold thru Russell and Smith in Houston Texas on March 11, 1970. The question of restoring, or not, was very much answered here and the Boss is back and looking forward to the upcoming years.