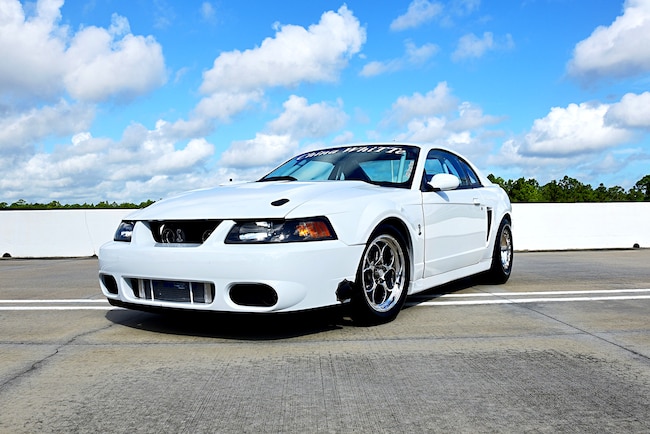 You may have heard the term “China White.” For the purposes of Raul Torres’s story, let’s just say it means a kind of addiction. An addiction that Raul Torres has had for Mustangs since 1993. In fact, Torres has owned 22 of them but none more special than his 1999 Mustang, aka China WhiTTe. The two capital Ts in the name stand for Twin Turbo.

Torres says, “I saw this car being assembled at Lujan Motorsports and immediately gained interest in it due to the quality of the build. Shortly after that, I purchased it in January 2015 from the previous owner Jonathan Montesino.” Montesino had been building the car for four years at eventually lost interest in its entirety.

After Torres picked up the car, he immediately took it to Jake Long at Power by the Hour in Boynton Beach, Florida. At that point, the men talked about what the goal was for the car and classes it was going to run. Although the car was almost turnkey already, it spent the next eight months getting repaired to Torres’ satisfaction.

The classic “twins” appear a bit intimidating through the front grille of China WhiTTe, and rightfully so. This car has the capability of running mid to low 7-second quarter-mile times.

Once complete, the next stop for China WhiTTe was the chassis shop AC Car Carcraft in Corral Springs, Florida, for the final touches. While there, they ran the VIN and realized the car wasn’t an actual Cobra despite the badging. However, that didn’t matter to Torres. The addiction had already taken hold. All the final touches were complete and the car was ready for precision tuning by Patrick Barnhill from PTP Motorsports.

A few short days later, the car performed flawlessly after just two test sessions at Street Car Takeover, Orlando. Torres went on to win two separate classes during that event. The next few months, he campaigned China WhiTTe as a grudge car throughout the South, winning multiple races.

China WhiTTe took on two classes at the inaugural Mod Motor Nationals at Memphis International Raceway in September 2016. Raul Torres qualified number one in both classes and is looking for a few wins at the next event.
Although EcoBoost engines weren’t around in 1999, Torres thought the badge might a nice to show where the car has come from. Or maybe it is to trick his competition.

Less than one month later, after acquiring a new set of slicks, Torres was headed to the NMRA World Finals in Bowling Green, Kentucky. He competed in the new Outlaw True Street class, where he went to the finals against Tim Oswalt. Due to a giant wheelstand, Torres was forced to abort the run, ending with a runner-up finish.

The final event in 2016 for China WhiTTe was the Snowbird Nationals at Bradenton Motorsports Park. Preliminary inspection of the car revealed quite a bit of water in the oil, signifying a possible crack. They aborted the race and decided to send the car back to AC Carcraft, where it could be torn down for the off season.

Once the car was back at Power by the Hour, a cracked block was confirmed. At that point a complete overhaul of the car would be accomplished. The first order of business was getting a fresh 4.L four-valve mod motor from MPR Racing Engines. The new bullet was now fitted with a nearly bulletproof Teksid block, Manley billet rods, and Diamond pistons. Custom ground Comp cams were installed by MPR inside a fresh set of 2004 Lincoln Navigator cylinder heads!

Now that the engine was built to handle some power, it was time to install a fresh set of Precision Turbo 67mm turbochargers, a PT 2000 intercooler, and the custom-made Wilson intake manifold. C16 fuel is supplied by a Weldon 2035 out back and managed with a Big Stuff 3 ECU. Patrick Barnhill was once again called upon for tuning duties, where the car made a modest 1,135 hp at 22 pounds of boost.

ATF Speed supplied Raul with a stout two-speed Powerglide behind a 5,200-stall speed converter from PTC. All the suspension parts remain in the stock location so that Torres can compete in a diverse number of classes. UPR supplied the control arms for China WhiTTe, while Strange shocks were mounted up front and AFCO double adjustable ones out back. Due to the addition of the Powerglide, Torres replaced the driveshaft with a beefier aluminum setup compete with dual driveshaft loops.

“I am a huge fan of the New Edge body style,” says Torres. “With the right set of wheels, they are easily my favorite Mustang design.”

To date, the car’s best performance has been a 7.71 e.t. at 177 mph, with a 1.19-second 60-foot time. With several race cars in his stable, Torres plans to race China WhiTTe locally in Florida at a few small tire shootouts. He will also campaign the car every year in the NMRA’s Outlaw True Street class as well as multiple classes at the annual Mod Motor Nationals.

When he is not behind the wheel you may catch him campaigning another of three Mustangs in the local South Florida grudge scene. He currently also runs a 1986 with a nitrous-assisted small-block, a Pro charger-powered 2014 S197, and his newest car, a single-turbo-powered 1989 Notchback. Torres says, “I have something for every occasion!”