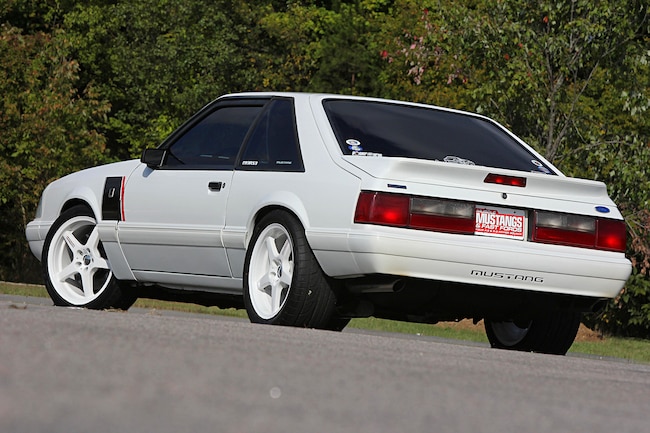 “The car was built to be a reliable driver, while still handling the occasional autocross or track day,” says Jamie Marsh from Lancaster, South Carolina. “The upgraded brakes and springs, along with the added power of the supercharger, have made the car a fast, reliable weekend warrior.”

Jamie’s Fox-body started life as your run of the mill Performance White 5.0 LX hatchback with an AOD. Since the car first rolled into the dealership brand new, this 1993 5.0 LX has always been a part of Jamie’s life. It all started senior year of high school when his best friend, Isaac Rush, received the then brand-new Fox-body as a graduation present. Jamie even tagged along to the dealership with him to pick it up. Senior year was full of memories in the Fox-body, and after that Isaac used it to commute to and from Wilmington for college for several years after that.

During those college years, the LX fell victim to wheel thieves, and at the expense of the insurance company, Jamie’s friend opted to forego the standard silver ponies, and ordered some factory summer edition white ponies as a replacement.

After college graduation in Wilmington, the car made its way to Virginia Beach. Always wanting a five-speed manual, the car was retired from daily driving duties and was swapped over using a fresh factory Ford T-5Z with all accompanying hardware. Soon it was sporting FRPP B springs, FRPP shorty headers, 3G alternator, Kenny Brown subframe connectors, and 3.73 gears. The interior was given an Auto Meter Ultra-lite amp; oil; and water gauges below the radio; and a FRPP shift knob.

As most of us know, life goes on and time changes things. Isaac was soon was engaged, and he lost interest in the car. Jamie purchased the car from him in 2008. “I had just wrecked my Honda autocross/road race car, and was looking to mod this thing to autocross and track,” Jamie explains.

Not completely content with the Pony R wheels, he vigorously searched for a set of 1999-2004 18-inch Roush wheels to complete the 1993 RS3 look. After a long search, he found a set of flaking 18x9 Roush wheels that he completely stripped down and refinished in a shade of white that almost perfect matches the 20-plus year old factory color.

Getting straight to work, Jamie swapped over to 1995 front spindles and hubs and fitted the front with 13-inch Cobra brakes and installed 5-lug drums on the rear. For better handling, he added Steeda competition springs and caster camber plates from Maximum Motorsports. He then swapped out the shorty headers for MAC longtubes, a MAC 2.5-inch x-pipe, and one-chamber Flowmaster mufflers and tailpipes. To set off the exterior, he went with a set of Chrome 2003 Cobra wheels.

Fast forward to 2010, and Isaac expressed interest in buying the car back. “I had other projects at the time, and didn’t mind one bit,” Jamie said. Isaac requested a set of factory Ford Bullitt wheels in place of the chrome 2003 Cobras, and Jamie was happy to help.

Three years had gone by, Jamie’s longtime buddy decided to buy some land and build a house and the car was offered back to Jamie yet again. “In April of 2013, I drove the car through snow and crazy weather to bring the car back home to stay this time. I wasn’t sure what I was going to do with the car, but I did have a polished Vortech SQ supercharger that was intended for a previous project, so that was a definitely part of the master plan,” Jamie tells us.

Right around the same time, another good friend had picked up an old Roush intake at the Autofair in Charlotte, North Carolina, from Sam at Out to Pasture Pony Parts. “None of us really knew anything about it, but I did know this would make the perfect centerpiece for my build,” Jamie says. “We hadn’t seen one in person, and I was able to talk my friend out of it and started researching. Luckily, the intake was mostly complete. It still had some of the key pieces to make it work.”

The metal gaskets were intact, as well as the intake specific fuel rail. With it being set up for a supercharger, Jamie knew it was meant to be. After doing some digging, he found out that the intake was taken from a 1995 Roush Stage 3 Mustang out of a performance shop in California. It also sported serial number 0007 out of just 100 of these intakes produced.

“According to a reputable Roush forum, only 18 were put on Roush turnkey cars, hence the serial numbers,” Jamie explains. “The remaining intakes were put on sale to the public but didn’t sell well due to the price. They sold kits to fit Fox cars, but were mainly intended for the 1994-1995 models.” That’s when Jamie found out that he had a rare piece on his hands.

As far as the exterior goes, he added a Cervinis 2.5-inch cowl hood to make room for the intake, and then added his own Roush-style accents to the fenders. The Bullitt wheels were swapped out for some black 17-inch Pony R’s, and then it was off to Mustang Week.

The initial plan was to install the Roush intake with the Vortech SQ supercharger and leave the car stock otherwise, but then he thought, “How is anyone going to know about my special piece of history under the hood?” That’s when the idea came to life of building the car around the Roush intake and to make his very own version of what a Roush Stage 3 may have looked like back in 1993 if Jack Roush had made a turnkey car.

“The first step, the installation of the intake, was more difficult than anticipated,” Jamie said. The intake was huge, and it required things that had to be procured that he wasn’t aware of until after they had started the process. Jamie and a friend decided to do the install a week before Mustang Week 2013, and they ended up pushing hard to get it finished. For the intake to work on the Fox, it needed two 1994-1995 style valve covers without oil fill holes, a 1994-1995 throttle linkage, and TPS.

“I had very little time and was lucky enough for Mike at East Coast Mustang to get me everything that I needed,” says Jamie. “Along with the intake, we installed GT40 heads reworked by Kannapolis Engine Service, a MSD Digital 6AL, a Contour dual fan setup, an upgraded aluminum radiator, 340lph in-tank fuel pump, 42 lb/hr injectors, the previously mentioned Vortech SQ supercharger, and an Auto Meter boost gauge mounted Roush-style in the AC vent.

After that, Jamie added 1995 Cobra 11.65-inch rear brakes to complement the front 13-inch Cobra brakes already in place. To tie everything together, Rob from Powercurve Motorsports got the car in at the last minute and got it tuned and ready just in the nick of time for Mustang Week. While there, the car made 419 horsepower and 401 lb-ft torque, even with the stock cam and stock rockers.

After the week full of Mustangs and sunshine in Myrtle Beach, Jamie decided it was time finish off the look. He purchased a set of Corbeau LG1 seats and harnesses, and Matt at Fox Mustang Restoration rewrapped the rear seats in matching fabric.

Fast forward to Mustang Week 2015, Jamie submitted a photo and a short description to Gibson exhaust as they were searching for a display car. Jamie was lucky enough to display his Roush tribute Fox-body as their Mustang Week display car to show off their new BMF muffler series. “Gibson exhaust sent me a pre-production handmade set of their new BMF mufflers before Mustang Week, and the car was started and revved numerous times during the event, and everyone loved the sound,” Jamie tells us.

In the summer of 2016, he was contacted by Mike Rey, the marketing director for Roush, who had seen his car at Mustang Week and offered a personal invitation for Jamie’s car to be displayed at the Mustang Memories show at the Ford World Headquarters in Detroit, Michigan. The car would sit in a special section dedicated to 40 years of Roush. “I was beside myself, but knew that the 11-hour drive, hotel and traveling expenses, and time off work were probably more than I could afford, and I had to politely turn him down. As soon as a couple of friends heard about the opportunity, they told me that I had to go. They graciously helped me with the expenses, and we made the August trip. It was awesome to be parked right next to the Roush trailer in my creation with these other beautiful Roush cars,” Jamie said. Jamie was presented with the Roush sponsor award for the show.

The biggest highlight Jamie’s build came earlier this year at a Roush Fenway fan appreciation day. He had taken the day off to attend the event hoping to take a piece off his car for Jack Roush himself to sign. Upon arrival, he was told to park in a grassy area, which required driving over a 3-inch concrete curb. Jamie knew the car couldn’t make it over and tried to back out of it. After some trouble with the parking attendant, Jamie ran into Lyle Sturgis from Tindol Ford, one of the key organizers of the event, and he recognized the car. Lyle told Jamie to go ahead and park beside the other Roush Mustangs at the event. “All of the actual parking spots were full so Lyle directed me right between the display and the other Mustangs, and then asked if I would like Jack Roush to sign my car. I couldn’t say yes fast enough!”

Jack was going to be spending a few moments with each Roush owner and sign their cars. Jack went down the row of newly purchased Roush Mustangs and as he reached Jamie’s car, his first words were, “I don’t remember building this car.”

“Lyle introduced me to Mr. Roush, and I began to explain to him what I had done. He told me the car looked good, and that I had done a good job. He then went on to sign my dash and Roush intake.” Jamie explains. “I knew at that moment that I had done something right.” A big thank you goes to out his high school friend Isaac for selling him the car and giving a great starting point for his creation, longtime friend Billy White and his dad Rick White for their help turning wrenches, East Coast Mustang’s Mustang Mike for the hard to find parts, Kannapolis Engine Service for the great work on the heads, and Rob at Powercurve Motorsports for a reliable and safe tune, his wife, Barrie, and son, Cooper, for having patience with his hobby, and last but not least, thank you to all the members of Southeastern Foxbodies for all of the support and friendships. 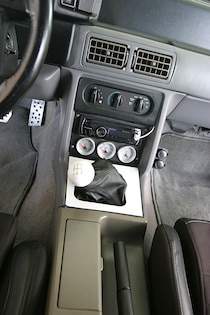