Pure Big-Block Muscle: Bruce Borchers’ Mustang may look like a mildly modified 1967 fastback, but wait until you see what’s under the hood 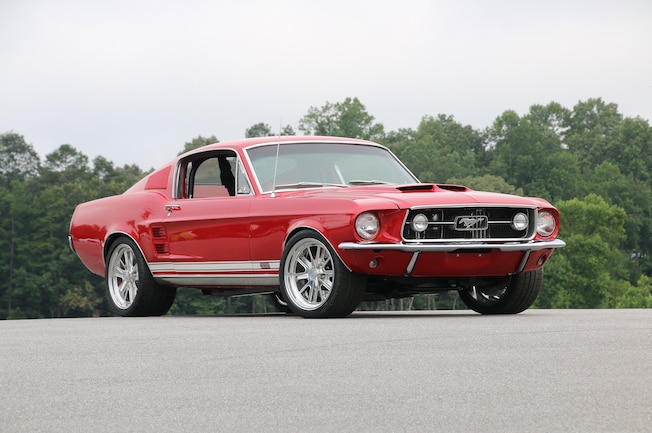 When it comes to dropping massive engines into 1965-1973 Mustangs, Jason and Lonny Childress at Gateway Classic Mustang crave the challenge. They’ve successfully stuffed a supercharged Cobra DOHC into a 1966 hardtop and have even created kits for installing the late-model Coyote 5.0L between the tight inner fenders. However, Bruce Borchers didn’t approach Gateway about installing a modern powerplant in his 1967 Mustang—he wanted a legendary Boss 429.

Borchers already owned the Mustang, one that any of us would love to have in our garage—a nice Candyapple Red paint on a GTA fastback with a peppy four-barrel 289 and the rare ribbed rear tail panel. Borchers was happy with the Mustang, but not the small-block engine. He described his vision as, “No gimmicks, just pure big-block muscle.”

The “big-block muscle” in mind was the Boss 429, the factory 375-horse engine that was shoehorned into a limited number of 1969-1970 Mustangs to homologate the hemi-style cylinder heads for NASCAR. As a fan of the Engine Masters Challenge, Borchers discovered Jon Kaase, Ford engine builder extraordinaire and long-time expert in putting together powerful 385-series big-blocks with Boss 429 heads. For Borchers’ project, Kaase started with a 460 short-block, and then stroked the crank for 520 cubic inches before bolting on brand-new Boss 429 aluminum heads with their iconic valve covers and center-mount spark plugs. Borchers was there when Kaase pulled the handle on the dyno—785 horsepower and 705lb-ft of torque.

Like the engine build, the installation of the extra-wide Boss 429 required specialized expertise. Borchers’ research led him to Gateway Classic Mustang, where the Childress brothers are well-known for their Pro Touring Mustangs with coil-over suspensions and modern drivetrains, including builds for rock musician Sammy Hagar and a restomod 1968 Bullitt fastback for Steve McQueen’s son, Chad.

To fit the big, bad Boss into the ’67’s engine compartment, Gateway fabricated a set of notched shock towers, which they now offer as part of a Boss 429 installation kit for 1965-1973 Mustangs. Ford Powertrain Applications supplied the custom headers that were needed to the clear the 4L80E four-speed overdrive, unfortunately a GM transmission but the only one recommended by Kaase as capable of withstanding the Boss 520’s brutal horsepower and torque. A Billet Specialties Tru Trac Front Runner system tidies up the front dress with a single serpentine belt for driving front engine accessories. Yes, this Boss-powered ’67 Mustang has air-conditioning!

Borchers delivered a very nice 1967 Mustang GTA fastback to Gateway for the engine swap. You’d never know that it’s powered by a Kaase Boss 429—until Borchers hits the ignition switch!
Halibrand-style aluminum wheels from Vintage Wheels look right at home on Borchers’ fastback yet fill up the wheelwells with their 18-inch diameter. Thin spokes provide a window to the big Baer brakes, which are part of the Gateway Classic Suspension set-up.

Gateway Performance Suspension components are utilized underneath, including an Extreme Strut Kit, rack-and-pinion steering, and rear 3-link, with Baer 6-piston calipers on 14-inch rotors at both the front and rear. Heavy-duty shock-tower-to-cowl braces and subframe connectors strengthen the chassis.

Jason Childress is quick to point out that, externally and inside, Borchers’ fastback is essentially the same car that arrived at the Gateway shop for the engine swap, other than the Shelby-style hood needed for clearance and original-look “520” emblems that Borchers supplied to replace the factory GTA versions. “As you see the car, it’s in darn good shape and pretty much how it was delivered to us,” Jason said during the unveiling at last July’s Mustang Club of America’s National show in Atlanta, where attendees saw a stock-looking 1967 fastback until Gateway’s John Arnold fired up the big-block to unleash an unexpected and mighty MagnaFlow roar from the wild Boss 520.

Thanks to Jon Kaase and the gang at Gateway Classic Mustang, Borchers got exactly what he was looking for: “Pure big-block muscle.”