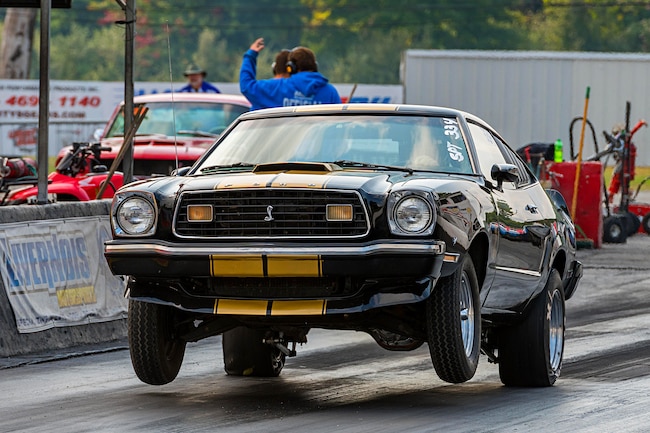 Everyone knows Charlie Brown, the always suffering central character in Charles M. Schulz’s comic Peanuts. Lee Mendelson, producer of the majority of the Peanuts television specials, has said of Charlie Brown that, “He was, and is, the ultimate survivor in overcoming bulliness—Lucy or otherwise.” If Charlie Brown was ever allowed to grow old enough, he probably would be driving a Mustang II, perhaps the most bullied car America has ever created.

Now meet the real Charlie Brown, a drag racer in Manchester, Michigan, and his ’76 Cobra II Mustang, both regulars at nearby Milan Dragway. But other than some ribbing in his early days, nobody can bully him or the car now, especially after it rips off mid 11s at 118 mph in the quarter-mile and gets driven to the track. Lucy is way too slow to pull this football out of the way.

Meet the real life Charlie Brown and his ’76 Mustang Cobra II. His door window sticker is from Ledwidge Motorsports, who “Without those guys I wouldn’t be doing what I’m doing. They have treated me like a brother with this car. They’re cheating dog roundy-rounders, and one is motor man, and one is my chassis man.”

Photographer Mike “The Photo Guy” Yoksich frequents Milan and photographed Charlie and his Cobra II during a regular bracket race there. What you’re looking at is a street-driven car that drives to the track, runs mid 11s all day, then drives home. It is also a former N/Pure Stock record holder when it reset the record from 15.40 to a 15.07 in a class that, in Charlie’s words, “You weren’t allowed to do anything to them back then. It still had the Motorcraft two-barrel carb on it. You were allowed fat tires and a gear and that was it. They’d go over your car with a fine-tooth comb.” That record stood for a decade by the way.

Charlie’s brother bought the Cobra II brand new in 1976 and was so depressed at how slow it was (the mid ’70s were a dark and gloomy time in the automotive world, as manufacturers battled fuel mileage, smog, and the influx of Japanese imports in a world that was the Technical Stone Age compared to today) that he sold it to Charlie, who has raced it ever since.

The engine is surprisingly stock. The original block is still there but the heads are AFR 180s, the cam is a big Isky grind, and an old Barry Grant 1,040-cfm four-barrel carb on a ported Victor intake is under that Edelbrock air cleaner, and it’s all painted Ford blue. Total sleeper street racer right here; would you ever think it runs mid 11s with this engine? The only giveaway is the Moroso cool can to keep the fuel cold.

After he set the Pure Stock record in 1982, he eventually got the car down into the low 14s still in Pure Stock form, which is quicker than any Mustang II went from the factory back then. He was running 4.63:1 gears and the stock four-speed at the time, but when Milan parted ways with the IHRA that they were sanctioned under, the Pure Stock class went away so Charlie went to a four-barrel carb, which was soon followed by a shattered stock four-speed. “I destroyed the little four-speed. It wouldn’t hang with redline holeshots and tires that didn’t allow any spinning,” Charlie said.

Today, it still has the original 302 block with AFR 180cc heads, a healthy Isky cam with “high-500 lift and 300 degree duration,” T&D shaft rockers, and “an old Barry Grant 1,040-cfm carburetor” on a ported Edelbrock Victor intake. The trans is a rebuilt stock C4 with a 3,000-stall converter that Charlie can’t even remember where it came from.

The interior is also shockingly stock, with stock buckets and even a stock shifter. The only clue that it’s quick is the five-point rollbar and big Auto Meter tach on the column (but hidden from view from outside the car). Charlie said, “The interior is a testament to Armor All. It is original everything. For a black car to still have a dash after all these years is incredible.”
Under the hatch is the battery box for better weight distribution.

Charlie drives his Mustang 35 miles from home to the track, drops the exhaust system, bolts on the Mickey Thompson ET Drag slicks, and runs mid 11s. Then does it all in reverse and drives it home. No trailer, no muss, no fuss, and he takes a lot of pride in that. Like we said, it has run as quick as 11.38 at 118 mph.

“A guy came up to me a little while ago and wanted to buy it. He threw so much money at me I dang near took it,” Charlie said, “But then I though about it and realized the car has too much sentimental value to me. I’ll never sell it now.” Considering he has 41 years with the car, we totally understand that logic. We wouldn’t sell it either.

Charlie still has the original window sticker, from the days when you could buy a brand-new Mustang for five grand.
Charlie lamented that it’s hard to build a Mustang II since there are so few places to get parts. He said, “They sold so few of them and the ones they did sell, they’re all rusted and gone, so it just got more rare as the years went on. The parts, people they think they’re gold because there aren’t any. I had it painted about 15 years ago and needed some bumpers and stuff and holy smokes, what a job just trying to come up with the bumpers! I got one from Washington state and the other one from Phenix City, Alabama, and they weren’t cheap man. But what are you gonna do?”