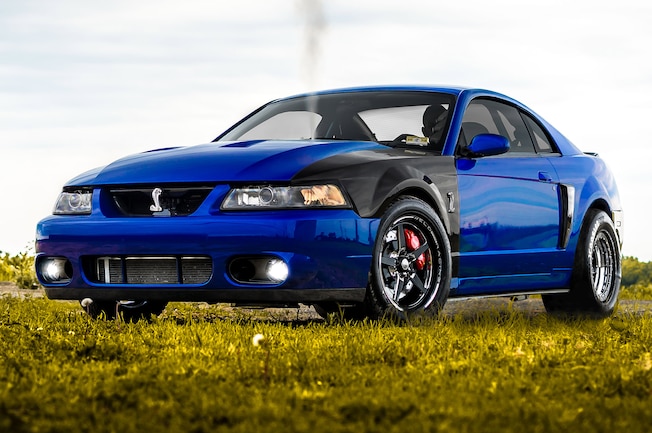 Chris Pilla did it the hard way. He’s built this car three or four times over, using what he’d learned to make the next right move (sure, and a couple of bad ones, too). He worked each combination. He flat beat it until it had no more to give. He lived it and profited from the experience.

Prior to this, there was great history. Ben Pilla Performance was his dad’s business. In the Seventies, Eighties and Nineties, Ben sold speed in four Mid-Atlantic States in. Chris has assumed the yoke and keeps on advancing. His first car was a Monte Carlo that he kept modifying in a vain attempt to overcome the front-wheel drive throwback. He went through a lot of engines, but he rebuilt the transmission at least a dozen times. “I got tired of spending all my money on something that kept breaking. I decided to get something that was reliable…and faster. It was my first stick-shift car so it was fun learning how to drive it.”

Chris lightened the load with quite a bit of carbon fiber, but it didn’t end there; he also swapped in a PST carbon prop shaft and phased out the jump seats with a Shrader Performance delete kit.

The Sonic Blue 2003 Cobra was original when Chris bought it in 2006 and has systematically hosted drivetrain and engine combinations ever since. He did the basic knee-jerk modifications at first, but soon tired of the malaise and stepped up horsepower and grunt to 500/500 horsepower/lb-ft at the pavement. Despite making several modifications for strength and longevity, he was beginning to have issue with the axle bearings in the independent rear suspension.

At the time, Chris resolved this with an 8.8-inch solid axle from Currie Enterprises. He was at the track in November 2010. The motor was making 700/620 horsepower/lb-ft and the car was running 10.80s at 134. “For some reason,” he said, “the intercooler pump did not turn on. I broke four pistons and cracked two more of them. So I took the engine out and rebuilt it myself.”

He retained the original bore and stroke of the cast-iron block. He retained the forged crankshaft and joined it with Manley H-beam rods and Manley 18cc dished pistons. The breakthrough came with cylinder heads prepared by Sean Hyland Motorsports (39/32mm valves). “In my opinion they are the best heads on the market and well worth the [gulp!] $7,000 investment.” In Pennsylvania, John Lund Racing SCT-tuned the engine: 740/680 horsepower/lb-ft at the wheels. “I was happy with this number,” said Chris. “The car ran mid-10s with consistency. Chris fitted the Hyland mega-heads with Comp camshafts (238/240 degrees duration at 0.050; 0.475/0.450-inch lift) and buttoned up the bottom with a Moroso 7-quart pan, MMR pump and windage tray. For induction, he converted to a 3.4L blower, 83 lb/hr Siemens-Deka injectors, Fore billet triple fuel pump hat with three Walbro 255 pumps. Kooks stepped headers (1¾-to-1 7/8-inches) blow into 3-inch Magnaflow mufflers. The engine extruded 865 horsepower and 750 lb-ft of torque. For emergencies, Chris adapted a 100-shot of wet nitrous, but had yet to use it in evaluations.

“When I went back to the track in 2016, I was having suspension issues and crazy wheel hop. I discovered later that I’d twisted both axle shafts and bent the housing as well. I replaced the 8.8 with a Chris Alston FAB9 chrome moly housing, Strange Engineering aluminum third member, Strange spool, 3.89:1 gears, Currie 35-spline shafts and a billet anti-sway bar,” he said.

Chris detailed the pit with swatches of carbon, Sonic Blue accents, a push button starter, embedded Auto Meter gauges in the dash and the on the A-pillar and put down carbon fiber inner/outer door sills and defroster panel. The flat-bottom steering wheel is from Red Line Accessories.

He hopped up the chassis, cinching the thing tight with a Maximum Motorsports 6-point roll bar, Kenny Brown subframe connectors, a Stifflers driveshaft safety loop, transmission mount and an AFCO K-member. For the rear suspension, he liked AFCO struts and Viking Performance springs front (350 lbs/in) and rear (125 lbs/in), and a combination of UMI adjustable upper control arms and Racecraft double-adjustable lower control arms. He completed the revamp with an Alston anti-sway bar.

Suffice that Chris Pilla imparted an overabundance of information, much more than would fit on these pages. And that’s the way it will always be with him. Too much is never enough. “I’m hoping for a 9-second pass this year. I know the car has that potential and I can’t wait for that to happen. I would love an automatic and a single 80mm turbo.” It’s only a matter of time. 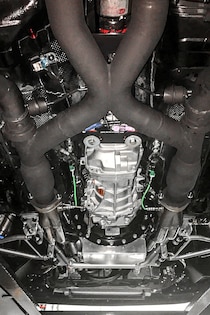