Newsletter
Sign Up today for our FREE Newsletter and get the latest articles and news delivered right to your inbox.
Home
Mustang Monthly
Features
Featured Vehicles

Combo Platter: Jim Weigle’s 1969/2014 Mustang is an exercise in mating old and new to create one amazing Mustang 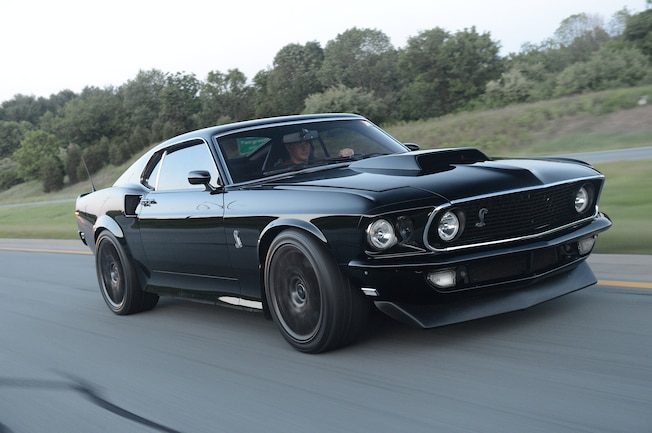 When we first walked up to Jim Weigle's all-black 1969 Mustang SportsRoof at the Carlisle Ford Nationals in 2017, it got our attention because it was straight as an arrow and with paint as deep as the ocean. Then we looked under the hood; "Nice, four-cam Cobra motor swap and it looks factory." As we soon found out, it was.

That engine wasn't even a dream in any engineers' eyes in 1969. The deeper we looked, the more it became obvious what we were looking at. Jim very skillfully mated the 1969 body to the complete chassis and running gear of a 2014 Shelby GT500, complete with the full 2014 interior, accessories, and even fuel filler. And a few bug guts in the grille proved he drove it to Carlisle from his home in Parkersburg, West Virginia. We had to know more.

Jim describes himself as "a cranky old man" and said he's loved cars his entire life. He has done very well in many fields of business, to the point that he has the financial means to buy any car he wants. But that's no Jim Weigle. He has passion to build things that blow people's minds instead of just writing a check for some fancy Eurotrash supercar. For instance, he showed us pictures of a Bugatti Veyron that a prominent auction company begged him to allow them to sell. When he revealed the secret that it was a total fake, a fiberglass body that (if memory serves us right) was on a Chevy Monte Carlo chassis but from the outside and inside looked 100 percent like a $2 million Bugatti—even the engine visible under the back window was fiberglass fakery—the auctioneer wouldn't believe him until a thorough inspection was done. When asked why he built it, he just shrugged and said, "I don't know, it seemed like a fun thing to do."

So that's exactly what he did. Jim did all the measuring and engineering to mate the two cars together and had a friend who was good at metalwork do the manual labor that Jim's aged back wouldn't allow him to do. For the base chassis, he bought a 2014 GT500 with a 5.8L engine and six-speed trans and cut the body off. That alone would make most normal people pause and rethink, but Jim isn't what you'd call "normal" in any sense of the word, so he pushed on, cutting the body free of its floorpan on the 1969 SportsRoof he had purchased.

Over the course of 14 months, the two were mated together Frankenstein-style but without a single stitch or scar. It wasn't easy, but nothing radical ever is. For instance, the desire to retain the 2014 power windows and door panels meant that the outer skin of the 1969 was mated to the inner door structure of the 2014, making a door that is significantly wider and thicker than the 1969 but with all modern internals that work as Ford intended. In fact, once you look inside the car you'd never know you weren't in a stock 2014 Mustang. The plastic interior rocker and rear panels actually took the most time and reworking to finish and maintain a factory appearance. We didn't have a lift handy to get under the car for photos, but looking at the build photos it's apparent that the car is as nice underneath as on top.

After our photo and video shoot with Jim and his son after the Ford Nationals, they packed up and made the four-plus hour drive back to West Virginia. At the conclusion of our shoot, however, we asked Jim what his favorite thing was about the car. He said, "There's no one certain thing I like about it. I like horsepower and it's got plenty of that."

Simple answer about a car and project that was anything but simple.

If the Name Sounds Familiar

Very astute readers of Mustang Monthly and Mustang-360.com may remember the name Jim Weigle. That's because Jim's previous automotive adventure was a 2005 Mustang (also black) with a wait for it 427ci DOHC "Cammer" engine replacing the 281ci three-valve mod motor (www.mustang-360.com/featured-vehicles/m5lp-0707-2005-ford-mustang-427/). Call it a polar opposite to the 1969/2014 masterpiece shown here. Some guys, they're just wired differently than the rest of us, and that's a good thing.

Week To Wicked Finale: Installing a Complete TMI Interior, Dakota Digital Gauges, and Final Wiring with details to make our 1990 Mustang LX Run and Drive.
Week To Wicked, Day 4: Mocking up a BeCool Radiator and Derale Fans and Shroud in our 1990 Fox-Body Mustang
Speed is David Carpenter’s drug of choice.