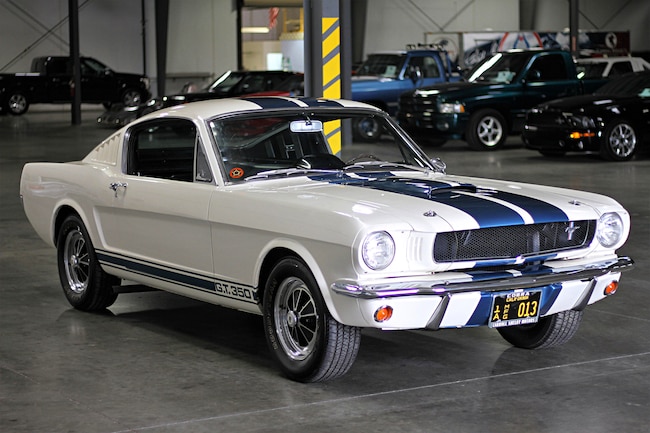 One of the most iconic Mustangs ever manufactured is the 1965 Shelby Mustang G.T. 350. Based on Ford Motor Company’s new Mustang, which was affectionately branded as a “Secretary’s Car”, the Shelby Mustang G.T. 350 bellowed Total Performance. Based out of Shelby American’s Venice (CA) Shops, one at 1042 Princeton Drive and the other around the corner at 3221 Carter Street, a handful of Shelby’s employees were tasked with turning the Mustang into a fire-breathing Corvette-conquering race car, ready to pounce on all of the competition in the Sports Car Club of America (SCCA).

This was no easy task, as the Falcon-based chassis was crude and far from an ideal platform from which to build a race car. Carroll Shelby assembled a Team led by Project Engineer Chuck Cantwell and Dick Lins to build 100 examples to satisfy the SCCA requirement to run in the B Production class. But before production could begin, they had to figure out what needed to be changed to make the less-than-inspiring Mustang into a race and performance street car, and keep the cost down as well. In order to race the G.T. 350 in SCCA B Production Shelby could not make changes to neither the engine nor chassis for the race version so the early street versions were built with the race chassis and suspension parts. This of course was great news for the public; to be able to purchase a street performance car with a race pedigree.

The rear view commonly seen by the competition. The over-the-roof competition twin stripes were a dealer added option.

For the Competition, or “R” Model for “Race”, the G.T. 350 was equipped with a 385hp 289 High Performance motor, a re-designed front valance, brake cooling ducts, no carpet, fiberglass seats, plastic windows, a full set of competition gauges, a roll bar, larger capacity radiator, oil cooler, 37-gallon fuel tank with large diameter fill cap with built in funnel, and 15x7-inch alloy wheels. The suspension was unchanged with the exception of stiffer damping on the Koni shocks.

Ford sent out two hardtop Mustang coupes along with Ford chassis specialist Klaus Arning for testing. Shelby assigned the development to Ken Miles and with the assistance of Bob Bondurant, headed out to Willow Springs Raceway to turn the Mustang into a race car. Klaus Arning came up with the simple geometric change in the front-end A arms and specified Koni shocks, override traction bars, Detroit locker, and wider wheels and tires. The Shelby G.T. 350 utilized the Galaxie station wagon 9-inch rear end equipped with a towing package with Ford’s largest rear brakes at 10 inches in diameter with 2.5-inch-wide sintered metallic brake linings. Best of all, this axle bolted right into the Mustang chassis with very little modification.

Peter Brock designed the triple-stripe on the rocker panel clearly identifying the car as a G.T. 350.
Shelby-Cragar 15-inch aluminum wheels were a $273.00 option in 1965.

Once the development was underway and pieces were selected from Ford’s parts catalog to enhance the performance of the Shelby G.T. 350, Pete Brock was tasked with making the vanilla-looking Mustang into something with a Shelby sporting image. With limitations that it couldn’t cost too much, Brock redesigned the easily removable components such as the hood and replaced with it with a fiberglass version to save weight, two versions of the wheels, the instrument pod mounted to the dash and of course, the G.T. 350’s racing stripes based on the graphics of Briggs Cunningham’s Le Mans Team cars.

Brock worked with Ken Miles, Bob Bondurant, and Chuck Cantwell at Willow Springs Raceway in developing the Shelby G.T. 350 R-model. Brock designed the fiberglass valance with a large opening that directed airflow through an oil cooler and the radiator. A pair of holes, one on each side, fed cooling air to the front disc brakes. The rear quarter window vents were covered by riveting on panels to control laminar airflow around the car at speed and the rear Plexiglas window was redesigned to vent air out of the cab. To be readily identifiable as a Shelby Mustang, Brock designed the side stripes on the rocker panel. By the 1966 model year Brock added the rear brake side scoops and the clear Plexiglas quarter window vents.

In late 1964 and early 1965 Shelby American was a torrent of activity. The Cobra roadsters were dominate at International circuits, the Brock-designed Cobra Daytona Coupe won Le Mans and was well on the way to an FIA GT Manufacturer’s Championship, the King Cobras won the Sports Car races in 1963 and 1964, and Shelby American was given the GT40 race program. The Venice Shop was the hub of International Racing and now took on the manufacturing of the Shelby G.T. 350.

On Valentine’s Day in 1965 Ken Miles won the debut race at Green Valley Raceway in Texas in the newly developed race prepared Shelby G.T. 350 (SFM5R002). Later that year Jerry Titus won the B Production SCCA Championship driving a Shelby G.T. 350. Success reigned once again for Shelby American. By early 1965 Shelby American moved from the Venice facilities to a larger complex next to the Los Angeles Airport (LAX) and went from a small operation in Venice with a handful of Southern California hot rodders to a more formalized environment.

The early G.T. 350s were manufactured by Shelby American and each had a unique serial number in consecutive order. Designated as SFM for Shelby Ford Mustang the early cars were 5R001, 5R002 and 5S003, as prototypes with the R listed as “Race” and the S listed as “Street”. Cars 5004 through 5014 were called “Advanced Pre-Production Prototypes” and were all street cars, while #5015 was called “Production”.

Car #5013 was an Advanced Pre-Production Prototype and used as a public relations car by Shelby American and was also used as a subject of a poster. The Shelby’s first owner was Editor of Sports Car Graphic magazine John Christy who purchased 5013 after he drove 5007 in Sports Car Graphic’s 10,000-mile road test from Los Angeles to Sebring to New York back to Los Angeles covering 25 states. Car 5013 was sold to eight additional owners, five of those owners in 1988 alone, and was purchased sight-unseen by the current owner in 1990.

The 289 used a 715cfm Holley center-pivot-float four barrel carburetor on a Cobra high riser aluminum manifold and helped bump the horsepower to 306.

The current owner (who wishes to remain anonymous) is an eclectic enthusiast with many significant automobiles in his collection including a 1948 SCTA Championship record holding roadster, a historically significant SCCA 1958 Porsche Speedster, a world famous 1959 sports car racer, and an original 1964 Cobra 289 roadster. The owner and his wife have traveled all over the world racing and exhibiting their collection in an effort to preserve and honor the cars’ historical significance, often times including the family members of the builders of these historic racers in their adventures.

So it has always been a mystery why the owner had the Shelby stored inside a garage under a cover for 27 years and has never driven the car since his purchase in 1990. A year ago, the owner had the Shelby towed to an expert technician to service it, refurbishing the brake and fuel systems, checking the condition of the original high performance 289, and making sure the Shelby is in top operational condition. The owner recognizes the historical significance of SFM5013 and had the car towed down to Shelby American International in September 2017 to be displayed for the first time in over 27 years during the press announcement of the building of the Original Venice Crew G.T. 350 IRS Mustangs.

The originality of SFM5013 is significant considering it was built 52 years ago and has been stored for half of its life. There are very small items that had been serviced over the years that are not original but that is considered normal for a car of this age and easily corrected.

SFM5013 is in amazing and beautiful condition and remains as what Carroll Shelby intended over 50 years ago when he took Ford’s “Secretary’s Car” and developed a Mustang that was a performance street car that took on the competition in SCCA racing and won championships in what was considered basic street trim.