Sean Taylor gets his 2012 Shelby GT500 ready to rampage 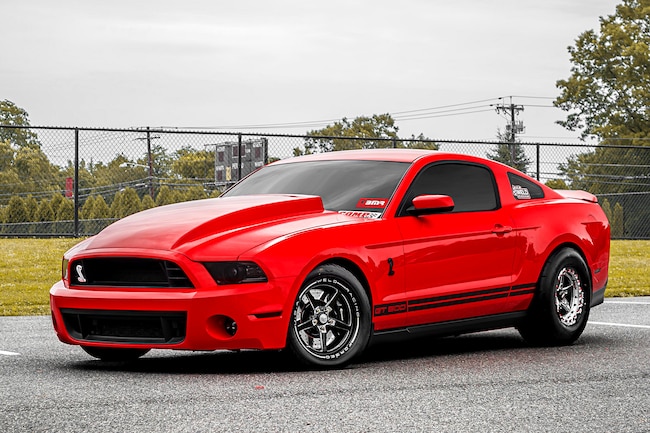 “I’ve loved Mustangs my entire life,” said 26-year old Sean, “and owning just one was not enough.” Sean’s of the mind that unless you’re having fun and enjoying every minute of it, you might as well stay rooted to the couch. He’s had eight of them, each one built differently from the next. Along the way, there were three GTs, a 5.0L California Special, a Boss 302 and a Terminator Cobra. But he always aspired to a Shelby GT500.

“When searching for a car, I’ll go the distance to find the ‘perfect’ one. My girlfriend and I have travelled as far as Ohio for the Cobra and Vermont for the Boss 302. I found my GT500 at a Honda dealership in Louisville, Kentucky.” He bought the 100,000-mile ride in November of 2015 and spent the next five months unloading trucks and stockpiling parts with Shaun Lacko at Madbridge Motorsports in Manahawkin, New Jersey. Sean burned to twist his street-driven supercharged Mustang into a full-bore racer.

Though Sean built the GT500 for racing, it ain’t no queen; it’s not a daily driver but he drives it to all events and loves the way it “plants” when he gives it stick.

“What I like about this car is that it looks evil coming at you. It’s a show-stopper with a mean stance that screams power and idles with a loud chop. It’s not a daily driver but I do drive it to all my events; meets, car shows and even for a little cruise.”

The 330ci motor built in Romeo is fitted with a forged crankshaft, forged 8.4:1 pistons and forged steel I-beam connecting rods, making it a proper foundation for everything you could throw at it and is a fertile launch pad for extended output. The only major internal change was the addition of JDM Engineering (Freehold, New Jersey) camshafts (specs withheld by JDM) and matching PAC valve springs. Toxic waste is evacuated by Stainless Works 1 7/8-inch primaries and course through a 3-inch system to the Stainless mufflers and Stainless cat-backs. For the first power phase, the original Eaton supercharger was limited to 12psi boost and tuner John Lund at Lund Racing (Media, Pennsylvania) was able to coax out an estimated 750 at the wheels.

But Sean sees the future; a vicious alternative flapping its dark wings just offstage. His next big deal is a single 76mm Precision turbocharger set up and by the time you read this, JPC Racing in Millersville, Maryland will have made the conversion, looking hard for 7-second elapsed times. As with other factory aluminum blocks, when output surpasses the 900hp mark, the cylinder sleeves begin to take umbrage. The Ford Racing Sportsman block addresses the sleeve issue, but there are only a handful of them available, so to remedy, JPC has developed billet inserts to support the bores and prevent them from caving under extreme duress. They’ll feed the pot with a JPC Racing pump, a triple drop-in fuel hat and Weldon fuel-pressure regulator, JPC fuel rails and Injector Dynamics ID2000 squirters. The stock lines will be replaced by AN-10 feed and AN-8 return lines. Boost should top out somewhere around 21 psi.

Processing that output is a Tremec TR 6060 transmission behind a McLeod RXT 1200 twin-disc clutch assembly that hugs the original flywheel. Grunt funnels into the 8.8-inch rearend fitted with 3.73:1 gears, a Torsen differential and the original axle shafts. Sean provided the critical link with a Driveshaft Shop one-piece aluminum prop.

Since the Mustang is drag race-oriented, there was no reason for monster brakes. Sean fixed the axle ends with StopTech 12-inch discs and Brembo 4-piston calipers in front and StopTech rear discs with Brembo 2-piston calipers. The other big frictional components are the M/T 26x6.00R17 Sportsman S/R skinnies on Weld Alumastar 2.0 Front Runners and 275/60 M/T ET Street S/S stickies on lightweight 15x10 Alumastar double Beadlocks.

Sooner than later, the interior will give way to rampant race car thinking: no rear seat, no HVAC system, and a big fat cooler working right where the passenger seat is now.

Sean gravitated to the inside of the car, looking for ways to reduce poundage, add safety and streamline its appearance. He’ll be doing a chromemoly rollcage and has already deleted the rear seat as well as the HVAC system. Eventually, on that crazy trip to seven-second bliss, the passenger seat will yield space to an intercooler the size of a refrigerator. Well, then there’s looking the part, too. Torch Red alarm covers a Cervini 4-inch cowl hood that’s flanked by a 2013 GT500 grille, 2013 tail light nacelles and a carbon front splitter.

“With all the suspension work, the car just plants when you get into the throttle. It stays very straight with just a little bit of wiggle. I won’t stop until I have that mean racing machine and even then who knows what I’ll do next,” Sean proclaimed. At this writing, he’d invested 17 months and plenty of cash into the red rocket. His plans for world domination promise to up that ante like a mother.

Jersey boys got attitude. Sean’s Mustang matches a mean stance with a choppy idle and a paint job that you couldn’t miss in a blizzard.