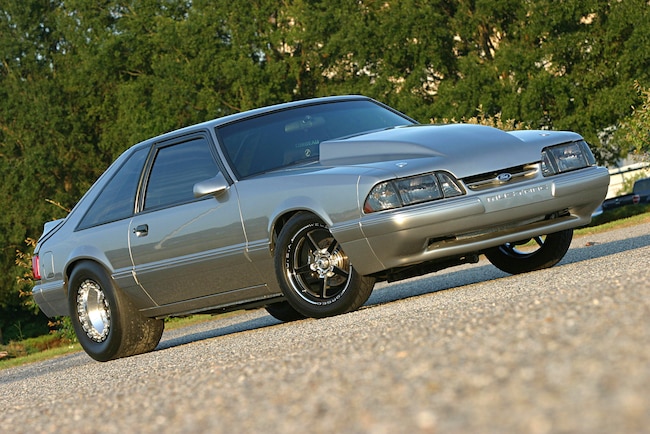 “I bought my first Mustang when I was 16,” says Jeremy Haymore, “and I’ve had the bug ever since.” Jeremy goes on to say he was the second person to ever have an HP Performance turbo kit, which was on that first 1989 Mustang GT. This was many years ago, before turbos became as prevalent as they are today. Since that first car (Jeremy is now in his mid-30s), and much like the rest of us, he’s owned a dozen different Mustangs since that first one. He’s owned LX coupes, Fox GTs, a True blue Bullitt, and a plethora of 2003-2004 Cobras.

“I tend to get into a pattern where I will own a Fox Mustang for a year or two, modify it, get bored, and get a Terminator,” Jeremy says. That is a pattern in which most of us find ourselves in from time to time. We find a Mustang, build it to our liking, get bored, and then we start looking for another. Thankfully, there are plenty of Mustangs out there for when we become bored, and looking for the next build candidate.

In Jeremy’s case, he has always replaced his Fox cars with Terminators, which is not a bad problem to have, but when he went to look for another Fox coupe, he had several qualifiers for which he was looking. Unfortunately, he couldn’t find the coupe fitting all of his requirements. However, he did find this 1987 LX hatchback fitting the bill. A friend of his owned the car and Jeremy convinced him to sell the car. “The car was a shell with no interior, no gauges, and no wiring,” he says.

The paint on Jeremy’s car is a custom blend applied by Bizzaro’s Custom Creations in Taylors, South Carolina. The car’s original color was red, but it was pretty rough when Jeremy originally bought it. The body received a total restoration, which also included a shaved engine bay, a mini-tub, and fully painted underside. Weld Alumastar 17-in skinnies live up front while Cartel Beadlock 15x12.5-inch examples reside out back.

However, it did have the qualifiers Jeremy wanted in excellent paint, a shaved engine bay, an 8-point roll cage, and mini-tubs. “I knew I wanted to do a modular swap, so I started collecting parts,” Jeremy says. He first wired the car using a Big Stuff 3, and a custom harness for the interior.

Then Jeremy and his brother Jonathan dropped in the engine to begin fitting the turbo system. Before getting into the turbo system, the initial engine was from a 2004 Lincoln Navigator featuring a stock crank, Manley I-Beam connecting rods, Wiseco pistons, and a 9.6:1 compression ratio. H&F Performance in Wilson, North Carolina handled the machining and assembly of the engine, which also included the Navigator Four-Valve heads, which were massaged, ported, and assembled by Randy Haywood. Bolted to the Four-Valve heads was a Sullivan intake with 160-lb/hr fuel injectors and an Accufab throttle-body. To feed the thirsty injectors, Jeremy added Bosch fuel pumps and an Aeromotive fuel pressure regulator.

The engine that was in the car when we originally photographed the car was a Navigator 5.4-liter combination with twin turbochargers. Behind that engine was a Turbo 400 with a Circle D converter. This combo made just over 860 horsepower at the wheels.
These days, Jeremy’s car boasts a built Coyote combination with a Forced Inductions single turbo with a FTI Powerglide transmission and a PTC converter. Johnny B Fabrications did the fab work on the turbo arrangement, while Harrell Engine & Dyno’s Pete Harrell handles the tune. On 20 pounds of boost, Jeremy has been 5.40 at 135 mph in the eighth-mile. He hopes to turn up the boost when cooler weather makes an appearance.

Back to the turbo system, Jeremy and Jonathan (Johnny B Fabrications) at first based the system around a pair of Precision 5858 turbos, eventually swapping them out for a pair of 6266 turbos. Cooling the air charge is a Treadstone intercooler, while air is released via twin Turbosmart Race Port blow-off valves.

Behind the Navigator combination was a Turbo 400 with a Circle D Specialties 3,400 rpm stall converter, a Tru-Cool transmission cooler, and a Hurst Quarter Stick shifter. With Bob Kurgan tuning the 5858 twin-turbocharger combination, the car made 864-rwhp on 22 pounds of boost.

But then, Jeremy switched things up even more. These days, Jeremy has a TKM Performance-built Coyote with Darton sleeves, Manley Performance internals, ARP hardware, and an 11.5:1 compression ratio. The heads and cams are stock, but heads were treated to a valve job, and new valve springs and guides. Up top is a Boss intake with 160-lb/hr injectors, managed by a Holley EFI system.

The twin turbochargers were swapped out for a Forced Inductions S400-ET-R 88 Billet single turbocharger, which was fabbed-up once again by Johnny B Fabrications. To cool the intake charge, Jeremy uses a Bell 1500 front-mount air-to-water intercooler. Instead of the previous Turbo 400, this time he went with an FTI Powerglide with a PTC 9 ½-inch converter.

When it came time to dyno the new combination, Jeremy looked to Pete Harrell at Harrell Engine & Dyno located in Moorseville, North Carolina. On a base tune using E85 and 15 pounds of boost, the now single-turbocharged Coyote made 830 horsepower at the wheels. At the track, and on 20 pounds of boost, the car ran a 5.40 at 135 mph. Jeremy’s plan is to push 28-30 pounds through the Coyote once boost weather arrives.

Remember that bug Jeremy mentioned? Thanks to this car that bug shows no sign of letting loose.