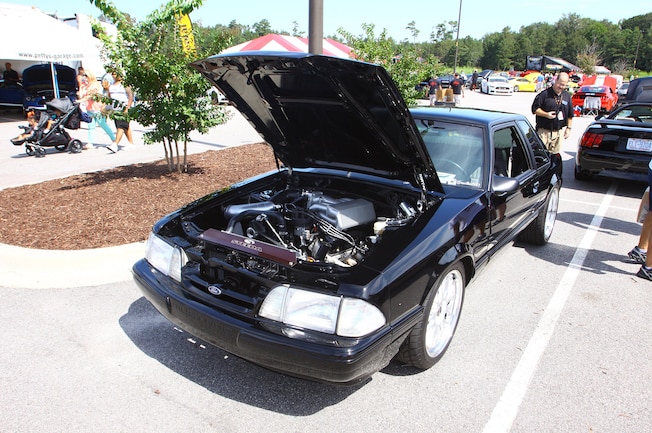 These days, the level of Fox builds has stepped up quite a bit. Large wheels, in-the-weeds stance, Coyote-swap combination under the hood, and custom interiors are becoming commonplace. All you have to do is attend events like Mustang Week, Foxtoberfest, and Ponies in the Smokies, just to name a few.

Our boy Robert Miller pointed us to Ernest Miller’s (No relation) 1992 Mustang LX coupe. Robert and Ernest have been friends ever since Robert drove by Ernest’s house 15 years ago, spying a red hatch in the yard. Ernest was building a 347 for that car, and it wasn’t for sale. However, a friendship started that day, which has continued to this day.

Ernest says all engine parts have been powder coated, which leads to a well-detailed engine compartment. And it may not be a Coyote-swap, but in our mind, nothing beats the nostalgia of a GT40 intake.

These days, Ernest and Robert are still building Fox Mustangs, and Ernest’s 1992 LX coupe is a car he built in his carport. Ernest did 90-percent of the work, and he had to farm out the car’s fresh paint. Otherwise, Ernest did the rest of the work on his carport.

The engine is a fresh bottom-end with a Trick Flow Stage 2 cam, Ford Performance heads and GT40 intake, and Canton valve covers. Behind the warmed-up small block is a T5Z transmission, an aluminum driveshaft, and a built 8.8 rear with an Auburn Pro differential, US Alloy axles, and Ford Performance 3.73 gears. The 4-lug system is swapped out for a 5-lug arrangement with Baer brakes, using Russell stainless steel brake lines. Wheels are XXR 521 examples wrapped in Nitto 555 Extreme treads.

Ernest ordered up a TMI upholstery kit and door panels for his LX, and did the work himself to restore the coupe’s interior to like-new condition. He also added new carpet, a new headliner, and a new package tray, as well. For gauges, Ernest added a Florida 5.0 cluster with Auto Meter Phantom II mechanical minders.

We were able to see Ernest’s coupe in person at Mustang Week, and you can see it in person at Foxtoberfest October 14, 2017 at Intimidators Stadium in Kannapolis, North Carolina. We’ll be there, too.