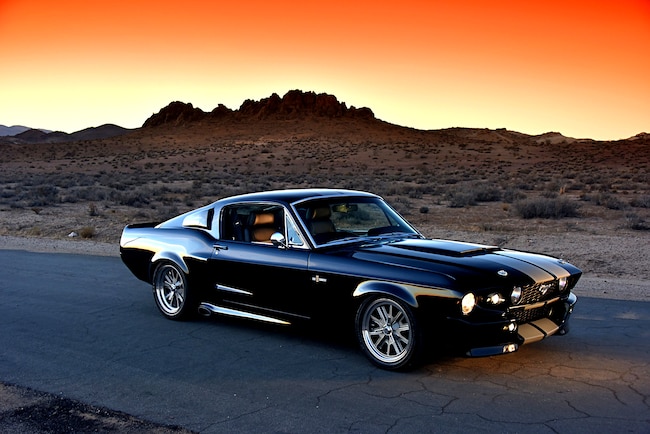 It's not uncommon to see recreations of classic magazine cover cars, vintage race cars, or movie cars in the automotive scene. In fact, go to just about any show in the country and you're bound to find at least a handful of them. But what recreations of automotive standouts offer in nostalgia and celebration of the past, they equally lack in individuality—that is unless you put your own spin on the concept, like the owner of this 1967 G.T. 500 Eleanor Mustang did.

When it came to recreating his favorite movie car, none other than the Gone in 60 Seconds' Eleanor, Les Stuart did things a little differently than most. Instead of reproducing the car he had fallen in love with, Stuart built the car with his own take on things. The result is a gorgeous Mustang he calls the Pit Viper.

One of the first things you'll notice about Stuart's car is that it features a paint scheme that is exactly opposite of the movie Mustang. Instead of dual Black stripes over a Silver base, Stuart's car was sprayed in an eye-catching Black Toner with Grey stripes by Fleet Body Worx.

“I wanted the car NOT to be like all the other Eleanors, so I reversed the Eleanor paint scheme,” Stuart explained.

Underneath that reversed paint scheme are subtle touches that make the car even more unique. In the front of the car, Stuart modified the front grille of a 2005 Mustang to fit nicely in place of the traditional ’67 grille. Out back, the rear bumper of the car has been shaved for an even sleeker look. Other unique aesthetic features of Stuart’s car include a lowered stance and a side-exit exhaust system.

Inside the car is a completely custom interior done by Bascom Trim and Upholstery. The tailor-made interior features black and grey leather-wrapped ProCar Elite seats with 3-point harnesses, a Moto-Lita steering wheel, and a role cage. The custom dash is outfitted with all electronic gauges from Classic Instruments, a RetroSound Model 2 radio, and a custom glove box, in which is a fuse panel, kill switch, and the car's ECM. Blue LED lighting is an added touch, which is turned on and off with a switch in the car's custom leather-wrapped center console. Another switch in the center console turns the car’s fog and driving lights on and off.

Built with Stuart’s passion for canyon carving in mind, the Mustang is set up to not only look pretty, but also handle like a champ. The car currently sits three inches lower than the traditional ride height thanks in part to the 1-inch “Shelby Drop,” giving the car a lower center of gravity. The car also features a couple of frame modifications, including welded shock towers and the addition of an adjustable export brace.

Much of the suspension system, both front and rear, comes from Maier Racing, with QA1 shocks on all four corners and a Fays2 bolt-on watts link paired with tubular subframe connectors to help stabilize the car even more. Connecting the Mustang to the asphalt are 17x9-inch (front) and 17x10-inch (rear) one-off ET AC III wheels wrapped in pavement-gripping Nexen rubber.

Steering for the car comes in the form of a TCP power rack and pinion system, while stopping power for the Mustang is provided by Wilwood’s 12-inch drilled and slotted rotors matched with 6-piston calipers behind all four wheels.

No canyon-carver is complete without a potent powerhouse under the hood, of which Stuart’s classic Mustang is adequately equipped. Powering the vintage pony is a 2014 Smeding Performance-built 427ci V-8 built on a 351 Dart block, which has been bored 4.125 inches and stroked 4.000 inches, giving the engine its current displacement and making way for the use of Edelbrock Performer E-Street aluminum heads. Internally balanced, the engine boasts 4340 forged steel I-beam connecting rods, a Nitride-treated, micro-polished and chamfered 4340 steel crankshaft, and 9.8:1 D-shaped aluminum pistons with floating wrist pins.

Digging deeper, the 427 uses a hydraulic roller camshaft and 1.6:1 roller rocker arms. Allowing the V-8 to breathe is an Edelbrock intake, while a FAST EFI system delivers the fuel it needs. Dumping into a custom exhaust system from JBA headers, spent fuel exits the V-8 by way of Flowmaster mufflers and QTP cutouts. The engine is topped off with a Concept One serpentine system and fired using a MSD ignition. Packaged together, you're looking at 630hp to the crank and 540hp to the rear wheels.

Backing the built 427 is a Tremec TKO 5-speed, which pushes every ounce of power possible to the rear wheels by way of a Traction Lok with 3.50 gears inside a Ford 9-inch rearend housing.

Stuart's version of the famous Eleanor Mustang is definitely unique—something Stuart was after with his five and a half year project—but chances are you won't see it at many shows. Built to be driven, instead you'll have to look for it turning the heat up on winding canyon roads.