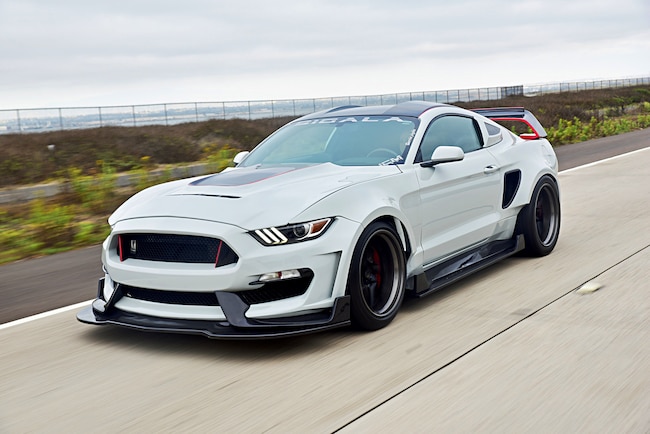 Tommy Liveoak is no stranger to owning modified vehicles, he has customized just about every vehicle he has ever owned and that even includes his daily drivers. Each vehicle had its own purpose and meaning for Tommy. As Naval Surface Warfare Officer in the United States Navy, he uses it to decompress and share experiences outside of work with others. Tommy mentioned, “I needed a healthy release from the stresses of serving for over 27 years in the Navy with dozens of deployments, and I felt the GT350 would be the perfect canvas to start from.”

Tommy finally found his Avalanche Gray Shelby at Perry Ford in Poway, California. Tommy loved the look and power of the GT350 right from the start and it already surpassed all his expectations on what this car was. Like every other one of his vehicles, he knew he couldn’t just leave it stock. That follows suit in the respect and spirit of one of his personal heroes Carroll Shelby. His legacy of doing it his way and not caring what others thought was a major driving force for selecting the GT350 in the first place.

The setting takes place on the beautiful Silver Strand beach in San Diego, California, where Tommy calls home. The front view displays the custom carbon fiber splitter and the hand molded front fenders that give the GT350 an even more intimidating look.

After several events and outings with the car, the GT350 was gaining a lot of attention in its stock form. Maybe it is that sweet sound that only the 5.2 Voodoo can make. Seeing his potential vision under the sheet metal Tommy had expressed his desire to build a one off GT350 and hopefully having it featured at the SEMA show; since he had an earlier chassis build, he was approached by different companies to help with his build.

These plans and concepts had various pros and cons. One of biggest ones was with a car this good, couldn’t he simply just leave it stock? As with any red-blooded American that answer is pretty obvious. Tommy eventually met up with Ernie Sigala, owner of HCM Carbon and they discussed his vision. They immediately saw eye to eye and knew what could become of Tommy’s GT350. They soon began work on a complete carbon fiber wide body kit with air ride suspension.

Low, wide, and fast is exactly how Tommy likes his vehicles. The above, three-quarter stance shows just how each body panel is custom fitted. The devil is in the details on the kit; every piece complements one other with no external hardware showing.

The carbon fiber kit from HCM is very in depth and utilizes 2x2 twill parts that’s adaptable to all S550 body styles. Tommy chose to go with prototyping the full 28-piece package. This includes an array of parts that completely transformed Tommy’s GT350 to the next level. Additionally, Tommy opted to add carbon fiber radiator moldings as well as side marker moldings. Even the insides of the headlight housings are now carbon fiber.

Before the kit was installed, each piece was hand painted with the best quality PPG paint available in Avalanche Gray to keep the integrity of the factory color. Tommy originally chose the unique Avalanche Gray color as a reminder and nod to the ships he served on and to never forget where he came from. Also the name of the car “El Nino” was after the famous weather phenomenon that makes California so special. So keeping true to that was a must.

Diode Dynamics headlights were installed to give the car an even more aggressive look. The advantage of the air suspension enables Tommy to drive the Shelby anywhere he wants to show it off. Tommy tells us, “The suspension feels amazing on any road surface. My favorite place to take my Shelby is cruising up the Pacific Coast Highway with my wife Sammy.”

Once the kit was complete and installed, it was time to upgrade the suspension. “Every vehicle I have had gets customized, so I wanted this one to be no different and to be a show stopper as well. Nothing beats the sexy looks of a lowered S550 body style Mustang.” Tommy went with Air Lift Performances’ 3P suspension kit, which allows a drop of up to five-inches. Now some people will ask what about the GT350’s MagnaRide suspension? When he bought the car it was going to be modified from first sight so it was ordered and built without it.

No car is complete without a good looking set of custom forged wheels and performance tires. Tommy and the builder Ernie agreed on a set of Litespeed Racing 3-piece forged racing wheels. With the addition of the air suspension and the carbon fiber wide body fenders, they could fit massive 20x13 wheels underneath, wrapped in Michelin Pilot Super Sports. Tommy even took leave and returned for a short visit from deployment in July of 2017 just to see the creation he and Sigala envisioned. Like a proud father he was simply amazed at its progress and immediately took it out to a car show while he was in town. Of course, he came back with multiple trophies, wining his class and Bad to the Bone award for the show overall.

Tommy’s Shelby has gone from a fun diversion from the stresses of multiple deployments to an obsession to reach his ever-expanding vision of automotive perfection. The goal is to be a show winning, adrenaline track beast that is just as fast and amazing as it looks. Of course that means he’s far from finished with it. Up next will be a 48-piece carbon fiber dash overlay kit for the complete interior upgrade and to carry the transformation throughout.

Although the 5.2 liter V8 puts out plenty of power, Tommy tells us it’s simply just not enough and the power has to match the looks. It goes back under the knife soon to install a top of the line twin turbo system. Tommy tells us. “It’s a car both my wife and I can enjoy for years to come. I am lucky she is a car girl and supports my passion. I plan to keep this one for a very long time.” Next time you see El Nino or more likely hear it stop by, be sure to say hi and see what has been upgraded - just like the weather it is ever changing.