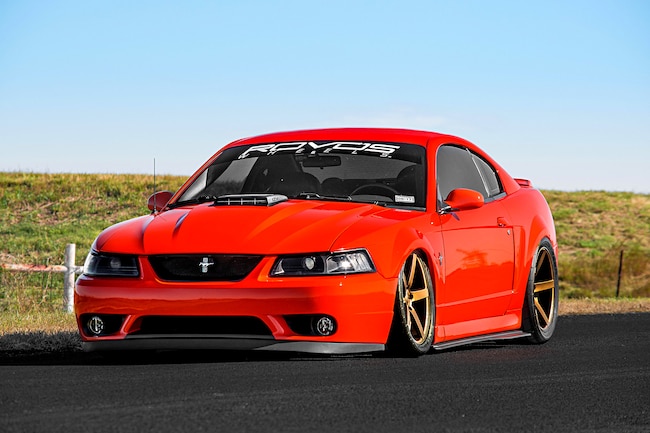 “I am a family man who goes to weekly car shows with my wife and son,” says protagonist Mike Synatzske. “We attend Mustang Week [in Myrtle Beach] yearly with one of our two Mustangs. Our other car is a bagged 2016 GT with full Roush exhaust and copper-plated Rovos wheels.” Those spirits were preceded by a 1998 Mustang, 2001 and 2003 GTs and a couple of import interlopers. From here, it seems a little complicated but it’s a caveat that free-thinking hot rodders anticipate and enjoin, possibly for the raw involvement having multiple players in the same garage.

“Our 2004 Mach 1 has been from Texas to Kansas. We bought it in 2006, stock with about 19K miles. We’ve changed the wheels and tires out a dozen times. Over 2009-2011, we added a full exhaust system, camshafts and some more changes to the suspension.” Don’t know if Mike woke up on the wrong side of Mars one morning or what. “We sold it shortly afterward,” he chimed.

But the dynasty did not die. “We got a 2013 that we lowered. Put a complete exhaust system on it, a Cervini hood and a bunch more bolt-ons.” This exercise proved moot because deep down, he yearned for his old orange car. He gave up searching for it. He found another nuclear Orange rendition and a month after taking it, spent three grand fleshing it out.

Then, Shazam! Hundreds of miles distant, he found the Chosen One up in Kansas. “We rebuilt and repaired the original Mach.”

In the middle of our research, we found several large items that were not included on the tech sheet we use to write the story. We sent an addendum. Mike’s reply was epic. “I answered all of the info that I had and knew. I've been building this car for over twelve years so I don't know the rest of those details anymore. It's been so long. I tried to write down all the info as I installed [the parts and did the work] to them. I don't have contact with the head shop anymore. Sorry I don't have more info for it. But that's all I have.”

He credits the outcome of his orange bomb to the following kindred spirits: “My wife for having fun building our cars together; to David at Rovos Wheels and Josh and Ryan at Ride Tech; MAC equal-length headers and exhaust system from Stang Mods; Dave Watson for the hand-made splitters.

Mike lives in League City, Texas, in the southeast quadrant of the Houston sprawl. The engine build, cylinder head treatment, and camshaft installation were accomplished by three separate shops. Machine work on the heads (valve job, enlarged valve seats, surface-milled 0.030-inch) and the ported and polished the lower intake manifold, is the product of Todd Warren in Beaver Creek, Ohio. Dave Layer at Heads Up! In Dayton, Ohio, put the heads together, incorporated proprietary-spec Bullet camshafts and sent them back to PSI Motorsports in Houston where all the components formed the whole. Induction ceremonies are handled by an Accufab twin 60mm throttle-bodies and an SVT Lightning 90mm MAF. On the other side of the cylinder heads, waste is extracted by modest MAC Performance equal-length ceramic-coated headers with 1 5/8-inch primaries that dump into a corresponding MAC H-pipe section holding off-road cats. It all winds up and in bullet-shaped SLP Loud Mouth silencers.

After the gel had set, PSI’s Patrick O’Gorman put the tune on it—we don’t have a clue as to what the numbers were. The quad-cam motor is hooked to the original 47R70W automatic which offers a 2.84:1 Low gear and features a 0.70:1 ratio overdrive.

A killer stance and bright paint are more than enough to make this car stand out anywhere, although Mike did add Bullitt side scoops and a shaved Cobra deck bump to go with the front lip from an 2001 Cobra. Snowman splitter ground effects complete the picture.

We think Mike’s crazy stoked about his car being in MM&FF. “I'm so excited for this,” he crowed. “The Mach 1 is cleaner than it ever has been. It's like a dream to have my car in this magazine.”

“I drive it aggressive. I don’t baby it. It runs hard and smooth. No issues.”

The base horsepower package is strictly a 450-horsepower bolt-on. No internal changes needed.

Tailoring the Mustang’s lovely stance, the suspension tweaks are minimal, more for form than function.