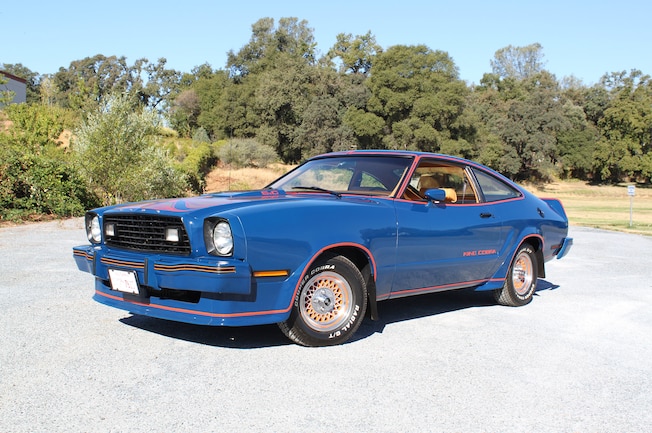 When one is hit with Mustang fever, just purchasing one doesn’t always cure the ailment. Sometimes the purchase of one, two, or possibly more will calm down the symptoms, but rarely is it fully cured.

For those who have multiple Mustangs in the stable, many times those ponies are from a certain generation. And if that is the case, often times obtaining the pinnacle of that cohort of Mustang is the ultimate goal. For a 1969-1970 Mustang enthusiast, having a Boss 429 in the garage would be the aim. A Fox body aficionado would set their sights on a 1993 Cobra. Even a fan of the much-maligned Mustang II has their highpoint and that would be a 1978 King Cobra.

For Bobby Aldrich, even having six Mustang IIs parked at his Placerville, California home wasn’t enough. Sure he had a couple of Cobra IIs and even a rare Stallion model, but he did not have the Mustang II that sat at the top of the food chain.

The King Cobra was only available in 1978, the final year for the Mustang II. It was the last cosmetic variation for the “little” Mustang. It borrowed several features from Pontiac’s highly-popular Firebird Trans-Ams of that era; a large snake decal adorned the hood, which also had a rear-facing hood scoop, though it was strictly cosmetic and non-functional. Even the 5.0 nomenclature graced the scoop; the first time the 5.0 moniker was used by Ford. The King Cobra also had its own unique front air dam rather than using the Cobra II’s front spoiler. Another distinctive feature was the rear wheelwell spoilers, again borrowed from the Trans-Am.

For $1,253 the KC came with the 302 engine, four-speed manual transmission, power brakes and steering, lacy-spoke aluminum wheels, exclusive front brake cooling ducts, as well as the Rallye package that provided heavy-duty shocks and a rear sway bar. With options like T-tops for $587 and an automatic transmission for $225, King Cobras left dealerships with a price tag of more than $6,000 by the time tags, tax, and title were figured. Nonetheless, 4,318 of them slithered out of Ford showrooms in 1978.

In 2008, Bobby found this King Cobra on Craigslist located near Redding, California, about three hours away from him. It actually had been listed for a while and the Dark Midnight Blue exterior was not one of Bobby’s favorite hues. After another price drop and with some prodding from his fellow Mustang II forum members Bobby took a look at it and followed through on the purchase. It started and ran fine, but needed a full restoration and Bobby would need to locate the missing front air dam. Though Bobby has a garage full of Mustang II parts, he did not have a KC front air dam, but with his connections in the II world locating one wasn’t too difficult.

As a mechanic by trade, first working at a local Ford dealership for 18 years until it closed, and now working for the El Dorado Sheriff’s department on their cruisers, handling the restoration would be no problem. Bobby did the paint and body work at his home. He did take some liberties on the original Dark Midnight Blue color by making it lighter to make the blue pop. Inside he re-dyed all the interior panels and located an N.O.S. console and lid. He had West Coast Customs in Placerville reupholster his original seats in the chamois vinyl. The chamois colored interior contrasts nicely with the blue exterior and orange KC stripes. Bobby also added subframe connectors since the Mustang II hatchback cars have a lot of flex, which is not as prevalent on the coupe. He completed the restoration of the 140,000-mile King Cobra in July of 2010.

Even though first generation Mustang devotees may scoff at the notion of a Mustang II having a model that is its highpoint, the fact of the matter is the King Cobra is that car. Comparing it to a first-gen may not be fair, but comparing the King Cobra to other mid- to late- 1970s offerings will find it to be more than capable to hold its own to other cars of that period. It is the Boss of the IIs.