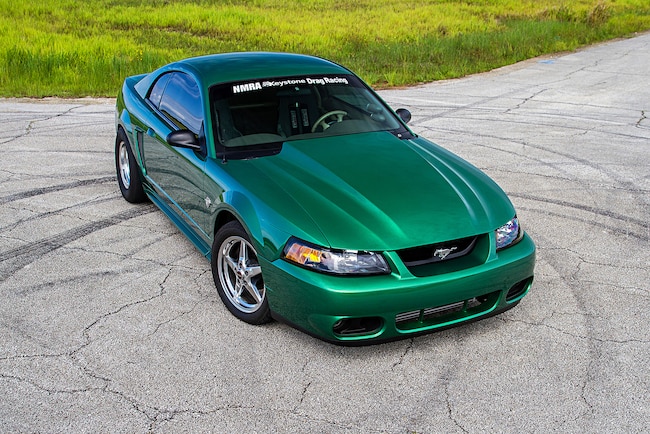 David Geisler hangs in Melbourne, Florida, over on the Atlantic side. Anyone who knows anything about the Big Peninsula knows that it can be a crazy place and that virtually anything can happen at any time. When it comes to cars in Florida, it’s the same thing. It rocks. Rain, sure. No snow. No black ice. You can peel rubber until the cops drag you away.

David Geisler is 39 and a telecommunications director who knew what he wanted. He bought the 1999 New Edge in 2011. It had 223,000 miles on the clock. It was in near-perfect condition. It encouraged him. He let his subjectivity off the leash. Cool thing is that all the work and the parts were local. Here’s how he got the GT set up.

David built his turbo motor with a forged short-block, basing it on a Cobra crankshaft, Manley dished pistons and H-Beam connecting rods.

“It was supposed to be a fun driver with basic performance mods to have some extra fun at the track,” he said. A nice sentiment, but once the gears began to clank, all his petty plans went to hell. “The car had the original engine and 5-speed and neither had never been opened, but it had an aluminum flywheel and an 11-inch clutch. The previous owner had nitrous on it, so I put a kit back on.

“After upgrading the axle and swapping to slicks, the car ran 11.5’s on a 150 shot. I learned the hard way what happens to a nitrous engine when you jump down too many fuel jets and lean it out so I started building a forged setup for it.” Indeed he did: Cobra crankshaft, Manley H-beam connecting rods and Manley pistons with 11cc dished domes to yield a static compression ratio of 10.5:1. He wouldn’t reveal the cam specs. He capped the bores with Trick Flow cylinder heads.

Then, in the middle of the juice-build David vectored and switched from nitrous to turbocharging. Pusher Intakes is in Vero Beach, just a few miles down the pike from Melbourne. Primarily, Pusher extracts eerie, whopping power from diesel trucks. The bottom line is they know how to plumb a motor regardless of what fuel it burns.

Pusher received the car with the headers, turbo, intake, and intercooler in place, and given the task of plumbing everything together seamlessly. Pusher based the project on a single 76mm Precision turbocharger featuring a .96 A/R exhaust housing. They put up CG Fabrication mild steel headers with 1 5/8-inch primaries and fabbed a 4-inch exhaust system routing it through Vibrant Performance silencers. Since the recipe was contingent on forced air induction and the higher operating temps inherent, they fit a Mishimoto intercooler core and plumbed it to a Logan Motorsports long-runner manifold pulling through a twin 65mm BBK throttle-body.

When it came to the fuel system, David handled the return system and added Bosch 80 lb/hr injectors. To extend the range of the stock system, he introduced twin 465 pumps in a Lethal Performance Hat. On top of this, the guardians and the enablers: a positive manifold pressure (16psi max) control via an e-Boost2, a J&S Electronics Vampire knock sensor, AEM failsafe wideband and AIS meth injection prompted by an AEM methanol controller. Bryce Kumis at Trick Pro Motorsports tended the stock ECU and did what he could, knowing that it was limiting output.

The driveline is composed of a Turbo 400 by FTI Performance Transmissions in Deland, Florida. They outfitted the engine with a J&B flywheel. FTI provided the torque converter; David now had a bulletproof transmission with a FTI shift kit, transbrake, a Hurst Quarter Stick shifter, a B&M fluid cooler (with fan) and the steel shaft.

Upgrading the chassis to handle the 760 rwhp (that’s on no methanol and just 13-degrees of timing), David tuned the chassis and suspension with UPR k-member, control arms, and a coilover conversion up front. On the action end, the 8.8-inch housing (straightened, braced and re-welded by TRZ in nearby Kissimmee) was bolstered by 3.27:1 gears, a Strange Engineering spool and corresponding 35-spline axle shafts. It is supported by TRZ control arms, Strange dampers, Ford Racing C springs and a anti-sway bar. Maximum Motorsports subframe connectors cinched the car together.

Though David built the 230,000-mile Mustang for True Street drag racing, he clears the cobwebs on the real street with DOT-rubber.

Orlando Mustang dressed the 1999 New Edge out with a 2003 Cobra nose and a Kaenen hood with a 4-inch bump to clear that Logan intake.

Over at Orlando Mustang in Osteen, Florida, the original Electric Green coupe got some upgrades as well. Orlando sprayed the Cobra fascia and Kaenen hood to fix rock ships from the years of daily driving. On the other side of the fence, a pin-neat, full-complement interior dominated by a Maximum Motorsports 6-point roll bar and Kirkey buckets draped with G-Force 4-point harnesses.

Now that this thing has legs, David wants them to move even faster. By the time you read this, he’ll be switching the stock ECU for a Holley Dominator EFI, and MPR Racing Engines in Boynton Beach has the nod for a completely new motor. As he mentioned previously, David will upgrade to a cage and plans to also install a Viking coilover setup.

At this writing, the Mustang has run a best of 9.29 at 147 mph (1.301-second 60-foot) on E85 at 16psi boost in True Street. “The car handles great and I drive it around town on a regular basis. Aside from being able to do that, what I like most about it is the comments people make when they see it’s just a Two-Valve motor.”

David went on to thank, “Wayne Stewart of KWS Images, Jacob and Jon at Pusher Intakes, Bryce Kumis at Trick Pro Motorsports, friends Austin Kormondy, Jon Pavia, Ethan Hass, Chip Norton, and Brittany Boydston (previous owner), along with all my friends that have helped me work on the car, or just sat and drank cold one to hang out while the rest of us were working on it.” 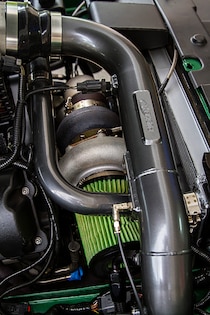 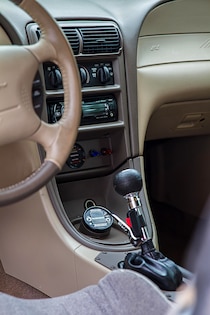 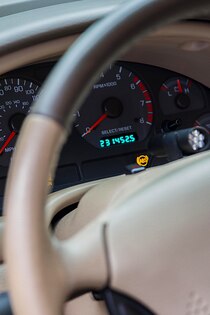