Carbon Fiber S550: Yes, this is the real thing!

Epic carbon footprint: This CF body is the real thing 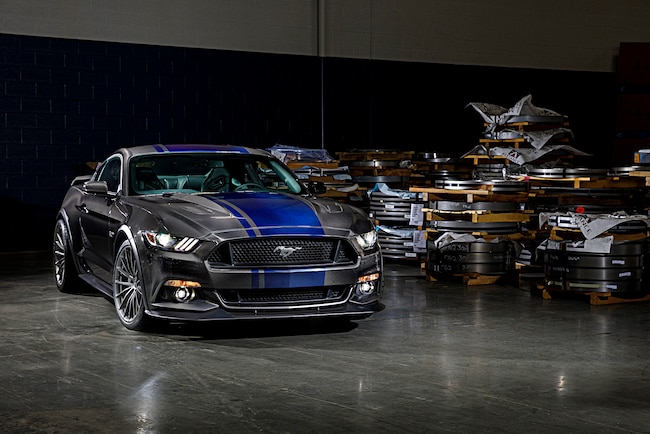 We wish we could write something here like “don’t try this at home, kids,” but we can’t. You can’t do this at home. You’d need about half-million worth of esoteric equipment just for starters. That’s why an outfit called SpeedKore up in Grafton, Wisconsin does it for you. You don’t need a half-million bucks; nope, you’ll be glad to hear you only need $70,000 or so to make this happen to your modern Mustang. No, you’re not dreaming. This is scary real.

SpeedKore is not parochial. SpeedKore is not small-minded. They consider the most capable production cars extant, Mustang among them. But it was their association with Dearborn that got them rolling.

Automobiles will evolve in every aspect, but reducing mass will always benefit the horsepower-to-weight equation.

Spokesperson David Salvaggio told us, “We believe that SpeedKore is a performance company. We focus on both early- and late-model custom builds, carbon fiber manufacturing; custom modeling, and CAD design for all automotive engine performance.” “We are adding to our parts line weekly and have a great relationship with Ford and we look forward to working with them in the future,” Salvaggio said.

“We sell a lot of carbon fiber parts as well. We make it here in the USA and we build the pieces using pre-impregnated aerospace-grade carbon fiber. We also maintain an autoclave [a strong, heated container used for chemical reactions and other processes using high pressures and temperatures] for our parts. Since most shops can’t afford $500,000 just for the autoclave, this tends to separate us from most shops.” Take a minute here to chew on that and take a long pull off that cold beverage.

SpeedKore builds its components with material that has been pre-impregnated with a particular synthetic resin used in making reinforced plastics.

Right now, the matter is not that SpeedKore has created a Mustang with the customary modifications; wheels, tires, supercharged engine and body cladding, but that they’re building cars the way Detroit may be doing it in the very near future. SpeedKore is of a mind that by 2020 and newer car companies will not be concentrating on how to make more power but rather on ways to reduce weight though lighter structural components. The idea is ancient and ridiculously simple. Reducing mass has the same result as adding grunt to the engine.

This Mustang is a very special car, a bellwether: all of its factory steel body parts (fenders, hood, roof, spoiler, ground effects, etc.) were superseded by carbon fiber counterparts and in this case represent a loss of 500 superfluous pounds. As perspective, one strand of carbon fiber is composed of 12,000 individual fibers, each of them skinnier than a human hair. “The metal skin was completely cut off and the panels were replaced with aerospace carbon fiber and attached with 3M panel bond adhesive. We designed a new spoiler, splitter and diffusers and cut-tooling to build parts that fit. Every one we sell does not need modification and the gaps and tolerances are exactly as factory.”

Maybe you can see that the weave pattern does not deviate from one surface to another (hood to fender, for instance) and meshes consistently throughout the exterior. In fact, the most vexing part of the program was successfully orienting the pattern.

For now, SpeedKore has endowed the 302-cubic inch Aluminator crate engine in its 2017 GT with several modifications designed to increase thrust. It maintains a 2.9L blower, matching aftercooler and a maximum boost of just 12psi. To reach that threshold, SpeedKore included 78 lb/hr fuel injectors in a system fed by the factory fuel pump. They passed on tubular headers and retained the OE 2.5-inch exhaust system, interrupting it slightly with SLP mufflers. They finished the tract with swoopy Akrapovic exhausts tips. To accommodate their deviation, SpeedKore redesigned the diffuser and the mesh surrounding the tips. They dialed in the factory ECM and in the end; they pumped out 825 horsepower at 7,500 rpm at the crankshaft. About 640 lb-ft ensure snappy throttle response.

Collective thought on the S550 GT: the original chassis and suspension are more than capable of absorbing twice the power of the original engine, but for aesthetics, SpeedKore couldn’t resist the Ford Racing lowering springs. Overall, the carbon exterior and the panel bonding adds rigidity and as well as more surface strength. For an eye-catching contrast, SpeedKore used 20x10 and 20x11 HRE P103 hoops sporting 285/20 and 305/30 Michelin Pilot Sport Cup 2 treads.

The new Mustangs are factory-built as a real driver’s car. Its interior accommodations and ergonomics reflect that and need no modification. There was no need to change anything else but they prettied the pit up a little with Katzkin leather on the seats, door panels and sail panels. Isn’t it cool to glimpse the future?

There are no metal body parts here. They were all replaced on this car with carbon pieces that were attached to the substructure. 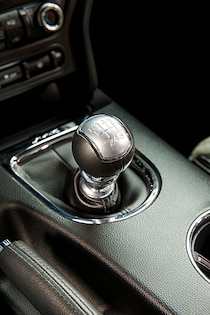 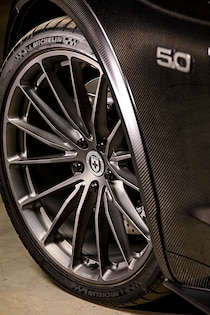 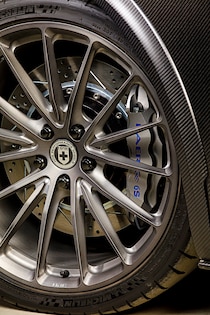 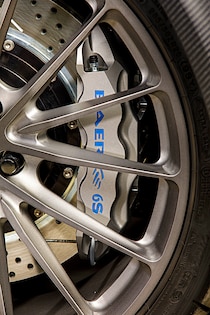