A Classic Fastback With ’03 Cobra Power 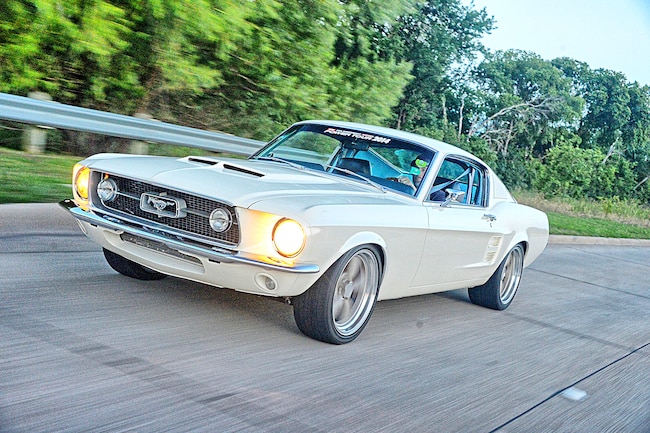 By design, Jerry Coleman’s 1967 fastback looks tame. It’s simply painted Wimbledon White with no stripes. But underneath the vanilla wrapper is a Pro Touring Mustang that was built for three events Jerry and his wife Carla like best—the Hot Rod Power Tour (June), Cruisin the Coast (October), and the Emerald Coast Cruise (November).

“My goal was to have a Mustang that didn’t look fast, but was a real snake in the grass,” Jerry says. A Cobra is a snake. Under this 1967 fastback lies the supercharged Terminator 32-valve, DOHC 4.6L out of a 2003 Mustang Cobra.

Jerry owns and operates a heating and air conditioning business in Lucas, Texas, on the north side of Dallas. He was on a call in Blue Ridge, Texas, during 2010 to fix an air conditioner in a mobile home when he discovered and purchased a 1967 fastback. The car was mainly a shell with no interior or drivetrain (see this month’s Rare Finds, page TK). Despite the lack of parts, this 1967 was perfect for the build Coleman had begun six months earlier.

Jerry Coleman created a classic Terminator with a supercharged 2003 Cobra motor in a 1967 Mustang fastback. Wades Customs created a custom valance of steel to integrate with the contour of the bumper. According to Jerry, there is only enough clearance for an index finger inserted inside the scoop, between the hood and the supercharger.
Was Jerry Coleman’s mission to build a Mustang that didn’t look fast accomplished? Maybe at first glance, but the longer people looked, the more they figured out this innocent looking white fastback is 1967 Terminator. He was adamant that no exhausts would hang down under the bodylines. The rear taillights are sequential.

“I bought the Terminator engine for a 1966 fastback, but when I started working on the body, I found it was too rough,” Jerry says. “I sold the 1966 and sat on that engine for six months before I found another Mustang. I’m glad I went with the 1967. I think it’s a beautiful car.”

How does a hobbyist turn pro, as in Pro Touring? Jerry thought he would have been in way over his head to transplant a mod motor into a classic Mustang and engineer suspension upgrades to put 500hp and 500ft-lbs torque to the ground. He pulled off this build starting with suspension kits from Total Cost Involved (TCI), a company he found in advertisements right here in Mustang Monthly. Jerry ordered TCI’s Mustang torque arm rear suspension and their independent front suspension, engineered for street, autocross, and road course.

UPS delivered boxes for three days straight. With the fastback on a rotisserie, Jerry went to work in his garage at home. There he bolted on parts as fast as they came in, plus some that involved a little bit of welding. In his words, he whacked the shock towers and installed the TCI front end and motor mounts to drop in the supercharged iron-block 4.6L Cobra motor, which fit the engine bay due to its cutback shock towers. He asked a talented employee, Gary Murphy, to help reconfigure the factory 2003 Cobra harness to the early Mustang. “The only thing we used the 1967 Mustang wiring harness for was lights and radio and other minor stuff,” he says. “The engine management system from the Cobra does it all—fuel pump, the air conditioner fans, and the fuel management for the fuel injection.”

For the Power Tour, Jerry wanted his car to be easy enough on gas to travel long distances. Of course, he also wanted it to go fast enough to make people wonder what was under the hood, a task well suited for an unfettered 4.6L supercharged engine (minus its four catalytic converters) with four-valve aluminum heads.

“You know, the Cobra engine now is 13 years old,” Jerry says. “Everywhere I took that car when I first built it, whenever the hood went up on that thing, there was a crowd around that car. They couldn’t believe it. It looks like a Hemi engine in it.”

Jerry wanted the supercharged V-8 hidden so nothing stuck through the hood. He chose a Shelby “short hood,” meaning not the elongated fiberglass hood for a 1967 G.T. 350 or G.T. 500, but a regular hood in fiberglass with an integral, functional scoop. Although the fiberglass scoop is open, it doesn’t vent air to an intake. He contracted Wades Customs to build a steel front valance that integrates with the contour of the front bumper and forces air into the factory intercooler to cool the blown Cobra 4.6L.

Jerry also wanted to fit the factory 2003 Cobra exhausts above the transmission cross member, in keeping with the sneakiness of his build. To make room, it took some serious work to widen the tunnel. Meanwhile, he considers the custom stainless-steel exhausts, featuring 26 beautiful TIG welds, done at Rich’s Performance Muffler (RPM) to be a work of art. The mufflers are four-chamber Flowmaster.

Jerry kept the Cobra’s T-56 six-speed manual transmission and chose a Hurst for shifting, which he cut in half to make it look how I wanted it to look in the console. He could have used the stock Cobra rear axle with its IRS, but after seeing a few of these builds, he thought the stock Cobra set-up made a classic Mustang too high in the back.

For a cleaner look, Jerry installed a one-piece door glass kit from One Piece Products.
Openings in radiator support channel air to the Terminator 4.6L.

“You could crawl under those cars without a creeper,” Jerry says. “You can’t do that with my car.”

He had ordered a Ford 9-inch with his TCI rear suspension kit, but the Detroit Locker proved too noisy. So he installed a Detroit Truetrac spinning a set of 3.80:1 gears, praising the quiet operation of the Truetrac. “It never slips,” he says. “If you are going in a straight line and hit the gas, it lays two black marks. It’s an amazing piece of machinery.”

The four-wheel Wilwood brakes that came with the TCI kit do not use vacuum assist, as normally aspirated engines do. Supercharged engines blow air into the intake, which is why Jerry used Ford’s Hydro-Boost from the 2003 Cobra donor car. (The boost for Hydro-Boost comes from the power-steering pump.)

MUMP_171000_WHITE_07 “The Pontiac Fiero seats fit like a glove and make the interior look big,” Jerry says. An ididit steering column tilts for easy access and the A/C and heater controls were moved to the left of the steering wheel to clean up the instrumental panel. The center stack mounts a pair of gauges and Jerry cut-down the Hurst shifter to his preference. The custom center console holds Vintage Air controls.
Relocating the gas filler and cap to the quarter panel makes refueling possible from a standing position. Some of the best times Jerry had in the car were while he was buying gas. “People would ask, ‘Does that thing have a 289?’ and I would say, No, but you’ve got three more guesses. If you can guess right, I’ll give you a hundred-dollar bill.”
The Mustangs to Fear one-piece headliner, with integral console (for lighting), increases headroom by 2 1/2 inches. The rollbar is a 1968 Shelby Mustang part purchased from a Mustang vendor.

Jerry credits the innovative one-piece headliner with integral console from Mustangs to Fear to be the best money I spent on the car. It was easy to install and increased headroom by 2 1/2 inches. One key innovative change inside is replacing the busy air-conditioning controls on the instrument panel just to the left of the steering wheel with a single Mercury Cougar A/C register. He mounted the three Vintage Air control knobs in the custom console under the armrest and fit the stock instrument panel with AutoMeter gauges. The little gauge between the traditional speedometer and odometer openings in front of the driver is for engine boost. The custom console mounts two gauges, in the style of a 1967 Shelby Mustang. The door panels are 1967 Mustang deluxe, which many enthusiasts still consider the best looking ever on a Mustang of any year. The seats are Pontiac Fiero buckets, which fit easily on Mustang seat tracks and adapted well to the Mustang-style upholstery with custom stitching by Lazy K Garage. For safety, he installed a stock 1968 Shelby Mustang rollbar. Something Shelby had wanted to include on its 1967 models.

The body is stock with some minor changes. Jerry wanted something different. So he replaced the conventional gas cap on the deck lid with a motorcycle-style gas cap from Ride-Tech, frenched into the driver’s side rear roof panel.

“I get lots of compliments on that gas cap,” he says.

He also installed power windows and a one-piece door-glass kit from One Piece Products to eliminate the side-vent windows. Maybe the most radical modification was to add Detroit Speed mini-tubs in the back. According to Jerry, this was the maximum mini-tub he could add that would to keep the stock interior. “It’s tight, but it can be done,” he says.

Jerry and Carla drove the car in the 2016 Hot Rod Power Tour, where they had met Graeme Saul from Johannesburg, South Africa.

“He comes over here every year and does the Hot Rod Power Tour with a neighbor of mine who lives about three miles up the street.”

After Graeme got a ride in Jerry’s 1967 during a leg between the drag strip outside Houston and Gonzalez, Louisiana, he tried to buy the Mustang. The answer was no, but Graeme kept emailing throughout that year and didn’t let up until the Colemans said yes. Jerry and Carla drove two cars to the 2017 Power Tour, the 1967 Mustang for Graeme and a 1961 Impala. When the tour was over, Graeme had purchased both of their rides.

TCI coilover shocks really upgrade the handling of this 1967 Mustang.
Jerry purchased a wrecked 2003 Cobra from a salvage yard outside of Atlanta, Georgia. He paid them to pull and ship the engine, transmission, rear end, gas tank, and wiring harness to his shop back home in Texas. The 4.6L supercharged V-8 was a tight fit.

Lacking a gas cap in the rear taillight panel gives this plain white fastback an even plainer look. The Terminator fastback now resides in South Africa.