A Special Kind of Fast 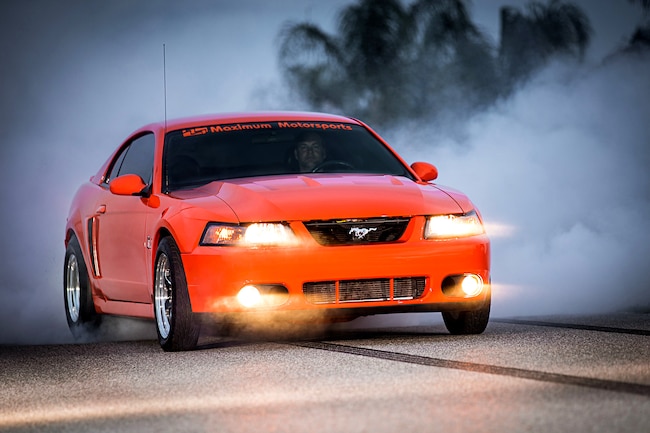 In 2004, Ford created just 281 SVT Cobra coupes slathered in the hue known as Competition Orange, making it the rarest color combo of the 3,768 coupes built that year. The color was offered in just one year of the two-year production run of the factory-supercharged specialty Mustang and it is considered one of the most sought after Terminators. That is exactly why Jeff Smith made an impulse purchase—sight unseen—while browsing an online marketplace in 2011.

“I buy and sell Jeep Wranglers as a hobby and came across this Cobra,” explains Smith as he notes the ad was bland and unassuming. Knowing a Competition Orange Cobra is a rare find, and even more so that the car only had 9,500 miles, he immediately scooped it up. The car was advertised as “stock,” however in Terminator terminology that meant it had a pulley, a cold-air kit, an after-cat exhaust, and a new tune courtesy of a DiabloSport Predator. He later put the car on VMP Performance’s chassis dyno for some baseline pulls and to review the engine calibration. A few tweaks later, Smith’s rare Cobra laid down 474 rwhp; enough power to run 11.80s at the drag strip.

Smith’s first national competition was the NMRA Spring Break Shootout in 2012 and since the car was a consistent 11.80 player, he figured he would back it off a bit and chase the 12.00 index in QA1 True Street. A missed shift during the second of three consecutive runs meant he was out of contention, but that initial outing at the NMRA event opened a whole new world for Smith. In the course of a year, Smith’s Cobra was used as a magazine test car for a VMP Performance 2.3L TVS supercharger kit and with it came 10-second time slips.

In 2013, Smith attended the Spring Break Shootout, once again, but he made more of an impact this time around with his setup. His consistent performances in True Street earned him a spot in the prestigious Tremec Stick Shift Shootout. The Oviedo, Florida resident went on to capture the title and walked away with a Tremec Mangum transmission. The Stick Shift Shootout win was the first of two that Smith earned in NMRA competitions (2013 and 2016) and he’s gone on to earn five other wins and a few runner-ups in True Street and stick-shift style categories at local events in Florida and Georgia. Those victories prove Smith’s prowess while wielding a short-throw shifter in his right hand and a clutch pedal under his left foot.

The 2003-2004 Terminator Cobra came with a stout 4.6L from the factory as Ford utilizes a steel crankshaft, Manley rods, forged pistons, and a set of Four-valve cylinder heads designed for the supercharged application. Smith did perform the popular trick of re-routing the cooling system to help eliminate a hot spot on the cylinder head.
The Terminator is run exclusively on E85 fuel, which Smith fills up at local gas stations. VMP Performance prescribed a return-style fuel system that consists of AN-8 feed and return lines. A pair of Fore Precision 465 lph fuel pumps delivers the fuel to Injector Dynamics ID1000 fuel injectors while an Aeromotive fuel pressure regulator keeps the rails pressurized.

In the five years of ownership, the engine remains stock as the valve covers have never been removed, however between the new supercharger and tuning, JLT High Boost cold-air kit, and the Bassani exhaust system, Smith has enough power to be on the verge of going in the single digits. Printed dyno graphs reveal his Terminator is making 704 rwhp and 640 rear wheel torque. The Cobra remains at full weight, tipping the scales at 3,800 pounds in race trim. He is proud that the interior remains completely stock, right down to the booming stereo system and the only real effort to drop weight has been a set of big and little Weld Racing RT-S wheels.

The Cobra’s excessive race weight isn’t due to just the full interior but rather the fact that Smith still employs the IRS setup in the back. Sure, he could’ve turned to a straight axle and made his life easier, but the challenge of getting the IRS to work in drag racing and staying true to the roots of the Terminator Cobra far outweigh the swap. The road to bottom 10s has been a fun one for Smith, who first looked at the front-end setup for weight transfer to plant the rear tires. Once the front-end rise was just right, the Cobra’s rear squatted so much that the exhaust would drag, momentarily, on the ground at the launch.

Maximum Motorsports was brought into the project to help solve the squat issues and provide solutions to keep the tire square and planted. The Terminator’s IRS system benefits from pretty much everything that Maximum Motorsports offers for that vehicle, including upgraded bushings, adjustable tie rod kit, adjustable rear sway bar end links, and initially, a pair of coilover Tokico D-spec single adjustable shocks. The flimsy half-shafts were ditched in favor of a set of The Driveshaft Shop Level 5 shafts and also a carbon fiber driveshaft was installed. All together, the Cobra has run a best sixty-foot of 1.47 seconds, which is quick considering the car’s heavy weight and type of rear suspension.

The interior is mostly stock save for a Maximum Motorsports bolt-on six-point roll bar and safety harness, keeping the car NHRA/IHRA legal for the times it is currently running. Smith rounded out the modest interior with an Aeroforce wide-band 02 gauge to the steering column.
Smith installed an Astro Performance modified Tremec Magnum six-speed transmission in the trans tunnel, which he won during an NMRA event. Other driveline modifications include a lightened billet aluminum flywheel, McLeod RXT 1200 twin-disc clutch, and The Driveshaft Shop carbon fiber driveshaft and Level 5 half-shafts.

Smith’s best run with his beloved and rare Cobra is a 10.02 at 140 mph, short of the 9-second goal and he has a remedy to that problem. Maximum Motorsports is developing a special pair of coilover shocks for IRS drag race applications and they’re using Smith’s car as the rolling test bed. The new set of double adjustable shocks are ten-percent stiffer than the Tokico shocks on the initial setting and Smith has the ability to make them even firmer with several more clicks on the adjuster knob. The stiffer shock settings will keep the backside from squatting too much. Smith can then adjust the rebound action of the shock to keep the tire planted as the Terminator moves down track and the suspension settles-in. He is also working on his McLeod RXT twin-disc clutch to keep the 704rwhp moving efficiently through the driveline.

As the odometer recently ticked past 26,000 miles, Smith continues to enjoy the Terminator on the street, in addition to his dragstrip habits. And while the car seems stuck in the 10-oh range right now, the new round of suspension modifications and the upcoming cooler weather should provide Smith the chance to attain his final goal of running 9s with the stick/IRS combination. 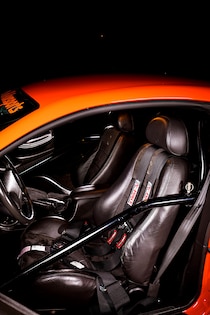